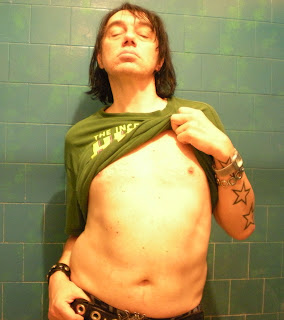 Rebecca had a friend in his mid-forties with awful crows feet and a jowly face who proudly bragged that he could still fit into his high school clothes. The thought of someone keeping their creepy old fashions from the 1970’s is too disgusting to bear. After all, those who forget past fashions are condemned to wear them again, so it’s said. Now that another year has gone by and my birthday is approaching the following changes have occurred in my life:

1. I really like spaced out trip-hop because there’s only so many screaming rock guys I can handle and I’m bored with bad jazz music, so I listen to crazy shit like DJ Spooky’s “Zxero”, DJ Food’s “The Riff”, and Kid Koala’s “Drunk Trumpet”, to name a few.

2. I like wearing makeup, and it’s a bizarre leftover from the glam era from the 1970’s. In fact I miss the whole glam era in general, pre-punk so it was all about love, narcissm, beauty and safety-pin hate wasn’t on the menu just yet. Slade, T. Rex, The Sweet, and Roxy Music called the tune, and it didn’t hurt a bit.

3. Social networking means nothing to me. I still haven’t been on MySpace, Facebook, Twitter, Etsy, or anywhere else. For five minutes I had a momentary lapse of reason and tried to register with Facebook. I had to fill out so many boring questions about myself that I had an anxiety attack and got off as quickly as I tried to get on! I can only go as far as Flick*r (who thankfully don’t care what my favorite food is).

4. Maybe I'm crazy, but I still feel like taking off my clothes and dancing - I refuse to get caught up in the 9/11 A Go Go paranoia set where everything is cause for panic and anxiety. I just don't give a shit. I'm here to tell you that everything's gonna be alright. Because I said so.

Getting old doesn’t bother me a bit but guys going through weird Dorian Gray maneuvers like keeping their old clothes and bragging about fitting in them does. The best thing about being seventeen is getting over it, the same way getting over twenty-seven is epic, too. It’s not the age you’re at but how hot you are living it, and it’s not something you can hang in your fucking closet.

Suggested listening: The Stranglers' "Old Codger Running" (from "Black & White")
Posted by Andy 7 at 12:18 AM

Thanks, Megan! Have a fun Halloween.