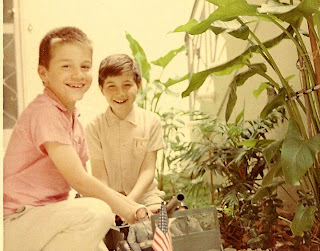 Steve Jones of The Sex Pistols once remarked that “every bloke has a bit of ginger in him” and dammit, he’s right. I get a warm glow in my heart when I apply my light blue eye shadow and work that sweet lip gloss like a cheap dame, but nothing can compete with that guy who stole my heart in my flaming youth. I called him my Joe, but everyone knew him as “G.I. Joe”.

“G.I. Joe” made the scene in the early Sixties and made my pulse pound like crazy until The Beatles came along. He was manufactured by Hasbro Toys from Rhode Island, where I actually lived at the time (1962). In fact, there was a kid in our school named Danny Hassenfeld who we treated like a rock star because his uncles were in fact the Hassenfeld Brothers (hence “Hasbro”). 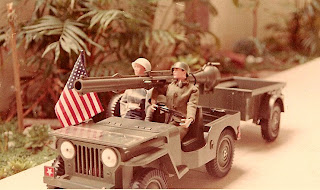 G.I. Joe was brilliant because finally there was a Barbie doll for boys, if Barbie killed Krauts and drank beer at the local PX. They all had a rugged scar running across their cheek and looked like they could kill Ken in their sleep. It was a major toy-making phenomenon and probably the only important thing to come out of Rhode Island*. When G.I. Joe first started out they confined him to the basic World War Two army soldier model. Once he took off, however, they made a Navy doll, an astronaut doll, a frogman, a Green Beret (topical for the Vietnam War), and then they got foreign on us: there was the British soldier, the bitchen French freedom fighter with beret and black turtle neck sweater (!), and accessories! There was the space capsule complete with 45 rpm record, jeeps, fire trucks, and I made my Dad crazy driving me around to toy stores scoring this junk. I’m surprised he didn’t kill my annoying ass. We even got the enemy G.I. Joes: The Japanese WW II soldiers, the German stormtroopers (I’m sure my father was thrilled to have that shit in his house), and of course the surrendering Italian fascists. No, I made that last one up.

But things got weirder by the day: just for shits and giggles I filled out a Barbie sweepstakes blank at the toy store and quickly forgot about it. When I came home from school my Mom said, “A big parcel came in the mail today for you, Andy”. Kids love parcels, yeah? I won a Francie Dream House and a Twist and Turn Barbie! Shee, yeah! Let me tell you, that TNT Barbie was one happy playgirl, pouting those sweet bee-stung lips of hers as TEN G.I. Joes sat around her serving her by her molded vinyl bed. Even the Nazi was down for it. The sailor might have been watching the astronaut bend over a few times, though. I would pose my studly servicemen around this hot little ingénue while my transistor radio blared The Kinks, The Turtles and Billy Stewart yodeling “Summertime” like Jackie Wilson on crystal meth. G.I. Joe was the awesomest pal a little boy could ask for. And I haven’t killed anybody.
________
*Next to me, of course. 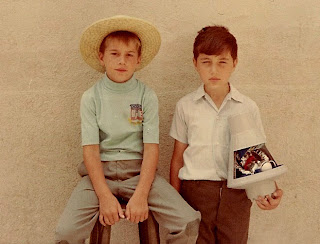 These are great photos! I love your blog. MORE!
Using the Barbie dream house as party home for your GI Joes was priceless.
I wish you took photos of that.

Hell, what a good story! Thanks for the tellin' Andy!