The Clayton Brothers Get Fruity 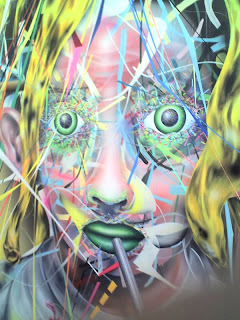 You couldn’t swing a dead man’s dick without hitting a hot girl at The Clayton Brothers’ “Jumbo Fruit” opening at Patrick Painter Gallery on Saturday, July 18. I don’t know what brought so many of them out in droves; perhaps it was the inclusion of “fruit” in the title. Next time I put on a show I must add buzz words like “fruit” or “candy” in my title.

The paintings were portraits of people eating or resembling various kinds of fruit, and while the content of the work was nothing special the technique was pretty dang offbeat.

The artwork was mostly oil on canvas even though the media didn’t appear that way. The smooth textures of the brush strokes gave an airbrushed appearance to parts of the work. Other parts of the painting had crude strokes that ran in counterpoint with the smooth lines. The result was a work that was stylistically unpredictable. 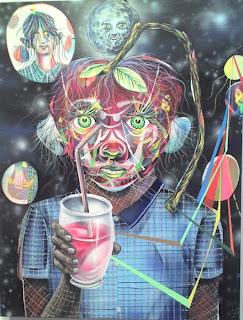 I liked the smaller portraits suspended over wooden slats of varying colors, that was a real attention getter. Patrick Painter is spread out over two spaces in Bergamot Station, and considering that it was the only gallery open after 6 pm it kept the event from feeling too claustrophobic. While artists retain the right to ask for any price for their work I thought The Clayton Brothers went way over the top. A quick look at their price list and there wasn't one painting under $40,000. That's right, there wasn't a typo or too many zeros on the list, every piece was $40,000 and up. I don't think anything sold.

I saw two curators from other galleries at the opening. One didn’t bother to say hi but he never says hi to anyone anyway. He looked like a member of The Mothers of Invention circa 1969, nice keeping up with the times. The other curator kept standing next to me but also wouldn’t say hi. It’s ironic because I bought two paintings from him and you would’ve thought that would rate a hello, but this is the art world. There’s more integrity in politics. 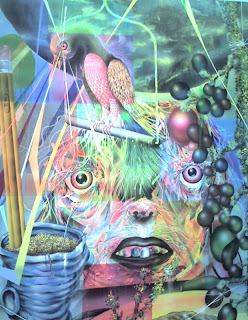