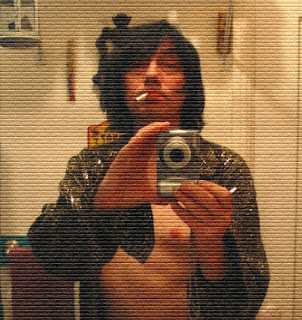 Since the first half of the year is done I figured it's time to do a halftime wrap-up of all the things that happened to me in 2008. So let's get the fuck started now:

January: Went to the NAMM show (North American Music Manufacturers) at the Anaheim Convention Center. It was crowded and exhausting. This month marked my father's 90th birthday. Posted my 200th review on Yelp. Joined GoodReads and was appointed a librarian.

February: Went to Beverly Hills and picked up a mink coat Rebecca's friend left her. Celebrated our 15th wedding Anniversary. Gave Rebecca blue topaz earrings. Went to the boat show at the LA Convention center thanks to stephen l at Yelp. My mp3 player died and I had to get a new one, sob.

March: Made a killer eggplant parmigiana at home. The next day I had a poisoned burrito at Chipotle. Fuck Chipotle, the worst food chain of all time. Some girl on the internet thought I was a chick and wanted to have lesbian sex with me.

April: Went to the Noir Fest at the American Cinematheque and saw some wild, sleazy crime films starring Steve Cochran, June Havoc and Beverly Michaels. Painted my toenails blue and started shaving my armpits. Maybe I am a girl and I don't even know it.

May: Met Raquel Welch in my parking lot. She's so cool. Rebecca gave me her old Canon so now I'm taking pictures of myself all the time (see above). Went to a Yelp event at the Blue Goose Lounge. Some people I "friended" saw me there and didn't say hi. Fuckheads. Thanks for friending me. Bought another camera, a Nikon Coolpix, like in the lame Ashton Kutcher commercial.

June: Went back to Palm Springs, where it was 110 degrees and all the tourists ran around with their dicks in their mouths. Played a skeeball contest with Adam B from Yelp at Santa Monica Pier and beat him fair and square, yay. Went to Gay Pride in West Hollywood and everywhere I went there were promos for Washington Mutual getting tossed in my face. I'm glad I canceled my account with them years ago. Bought myself six pair of shoes and boots this month. Maybe I am a girl after all.
Posted by Andy 7 at 6:24 PM

March: possibly the best summary of a month ever?