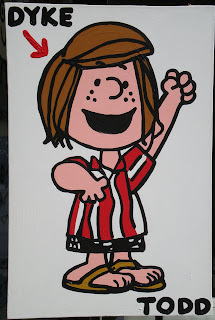 Well, it's the first weekend in June and that usually means it's time for Gay Pride in West Hollywood. It was a real assault to the senses...sight, sound, and with a petting zoo, olfactory as well.
I saw more lesbians there than gays, maybe a first since the last few times I've been there. Rebecca thought most of the lesbians at the fest looked like they should be stirring a boiling cauldron somewhere. Some of them did look like witches, but there were old queens who looked just as ghastly.
As usual, I was there for the swag and the cool merch that was for sale. I bought two belts, one metal with little gears on them and one leather with an old 45 RPM adapter belt buckle. Rebecca got the best belt, though: a belt buckle with a removable booze flask clipped on it!

The festival was not without it's carnival vibe, though: we walked into an S&M tent where a man wore a creepy rubber pig's mask and he was sticking another rubber lad into a leather-lined box. In 95 degree weather! There was another dude clad from head to toe in rubber and wore a rubber top molded into a wall urinal. It was sick! I was so hypnotized I forgot to take pictures. Damn it.
A perplexed old queen walked up to me and grumbled, "I've been committed to mental institutions five times. The last thing I want to do is get locked up again!"
"Well, these guys seem to like it", I said.
"They can keep it!" he spat, busting through people on his way out of the tent.

We went to the bandstand and watched a bad Pussycat Dolls-ripoff troupe dancing and acting the way only a nine-year old girl would find sexy.
Then some kid with a skunk striped mohawk talked for ten minutes about how all his songs were originals, and went right into David Bowie's "Changes". Then he performed Michael Jackson's "Don't Stop Til You Get Enough". His backup singers both looked like they weighed 350 lbs. each. Woof!
Kimberly Caldwell from "American Idol" followed, wearing a hideous t-shirt belted into a dress with the ugliest orangey indoor tan I've ever seen. She performed an all-lesbian set, Melissa Etheridge, then Bonnie Raitt, what a fake, she's doing some guy from her TV show, what's with the dyke beau gestes?

Last year's music program was Eighties rock and I missed that. I think everyone did, too, because the turnout for the musical acts was a lot weaker than last year. Here's hoping next year's program will be a lot better.
Posted by Andy 7 at 9:34 PM