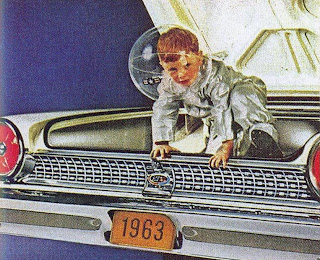 I've had two experiences with the horror named Long Beach Traffic Circle: In 1991 I was visiting Long Gone John my record company chief to discuss my newest record we were going to release. After all the business talk was done we decided to celebrate by heading off to a cool bar somewhere. We went in his car, a junky Volkswagen station wagon (1972 hatchback) where the floor heats up badly, it comes through your shoes, and the engine is so loud you can barely hear what the other person is saying.
"I'm pretty excited about the cover concept."
"WHAT? HUH??"
"I SAID THE CONCEPT FOR THE FRONT COVER'S PRETTY COOL!!!"
"THE CAR HOOD'S ON FIRE?? NO WAY, DUDE!"
En route to the bar I saw this weird little roundabout that reminded me of that nutty circle near the Arc De Triomphe in Paris. I think Piccadilly Circus has a weird circle like this, too.
It was the Long Beach Traffic Circle and cars were merging into it and others were flying out of it. There were metal signs all over but no traffic lights, so basically nobody paid attention to the signs at all. It was anarchy!
We got on the circle just barely getting broadsided by a car that didn't give a tinker's fuck about us getting on. BEEP! "HEY YOU FUCKING SHIT FOR BRAINS!" somebody yelled at John.
"Fuck-in A", John cussed angrily. He was now trying to switch lanes to get closer to the exit at the other end of the circle. Nobody was letting him get through. He had to cut someone off to get into the exit lane, but not without somebody merging into the circle as he was switching lanes. John slammed his brakes hard, barely smashing into a dented Cadillac. HOOOONNNNNNNK!
"YOU BLIND FUCK! WAAAATCH IT!" some angry little dog turd of a man yelled.
"Fuckin' A! Fuckin' A!" cussed Long Gone. We finally got off the circle barely getting smashed and maimed by passive-aggressive John Wayne men manning their shit sleds. We finally hit the pier and had a good drinking sesh. Good times.

2002: I got a job offer from some investigators in Long Beach to be a part of their team. I wasn't really interested, you know, staking out insurance frauds outside of their houses in my car for hours holding my pee in didn't sound like fun. But they said, "We'll show you our spy HQ plus WE'LL BUY YOU LUNCH!"
Okay, well, I'm down for free food. I drove into old Long Beach and had trouble finding their unmarked mystery HQ (no street number in front) but I had the street name. I drove all the way down and didn't find the building, so I called them on my phone.
"Hey, I can't find the building where are you?"
"Are you on the corner of T________ and W_________?"
"W_______? How do I get to that street?"
"Oh", the secretary said, "You have to drive through the Traffic Circle to get there".
I looked two blocks down in front of me and there it was like a waiting devil's mouth. Long Beach Traffic Circle. Packed. With cars. And there was something 2002 had that 1991 didn't have: SUVs. So the cars were bigger and pushier than before.
There was no other way to get to the HQ so I had to merge into the unyielding flow of traffic. Nobody knew how to slow down but they knew how to get pissed off.
BLAP! "GET THE FUCK OFF THE ROAD!" a skinny girl shrilled with a cell phone in one hand and a venti latte in the other.
I had to switch lanes to get out, and no one was yielding to me again, so-
HONK! "ASS-HOOOOLLLLLE!!!!" some piece of crap with a shaved head and a goatee hooted.
Well, I finally got off the Road Hog merry-go-round in one piece and got to the Insurance Inspector's HQ. I saw the lay of the business, all cool ex-cops smoking and showing off their gadgets and tricked out car trunks with spy gear. We had lunch at Denny's cause they're cops and that's what cops eat in their 1965 disc jockey hair styles. The food was okay (Denny's, man) and I told them that I would think about being a Worker's Comp spy for them (heh-no way!), so... Long Beach always brings back crazy memories but Long Beach Traffic Circle...is the stuff of nightmares.
Posted by Andy 7 at 4:04 PM