where do all the wild boys go

closed captioned for the hearing impaired

let’s go back to the big long hands

So in addition to recording this poem I thought it was time to get some of my mandolin in on the action. My playing is a little rough and the editing is even rougher, but it's okay. After this lockdown is over, I'm going to head over to a decent recording studio and engage in some decent overdubs. Should be good.

The echo on my voice was largely inspired by vintage country records, where the narrator talks about how he's serving time in prison for killing a man who took his beloved, forcing him to do the unthinkable. I love those records, and as long as I was doing a weird self-pitying narration here was my golden opportunity. 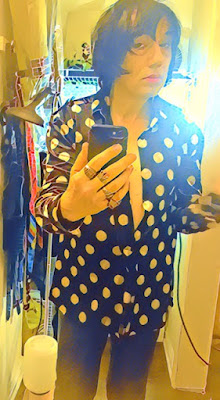 him: Hey!!
me: hi
him: So, what’s going on?
me: nothing, what’s up?
him: I’ve been checking you out. You’re all kinds of fine. So, what’s going on? May I ask you personal question?
me: um, well…
him: Are you trans?
me: what?
him: Are you trans? Coz, you no, you’re like a hot chick but you have dude’s name.
me: I’m not trans, I’m me.
him: Are you trap? I’m from Pakistan. It’s a long way from you. So, are you trap?
me: no, I’m a boy.
him: I could make you feel like a woman. I have beautiful gray beard. Did I offend you? Are you trans?
me: what?
him: You look like a pretty girl. Do you like violent sex?
me: oh….you’re from Pakistan. I’ll bet the heroin there is totally pure. send me a few bags…Hazan, is that your name? send me a couple of balloons, Hazan.
him: No, I want to have sex with you, pretty girl.
me: sex is nothing, heroin is everything. send me your desert drugs.
him: You’re just a dirty drug addict! You’re filth! You disgust me, Trans! I spit on you, you ugly witch whore!
me: ah…so how about those balloons Hazan?
NO REPLY
BLOCK