Tales From The Dance Floor 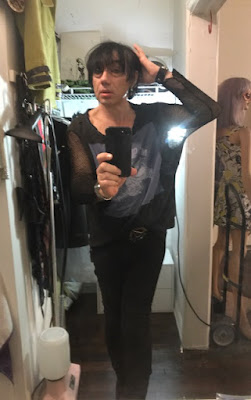 Before fascism overtook the United States I discovered industrial dance with an urge to live a few moments of Weimar Germany in Hollywood, like Sally Bowles filtered through KMFDM and their like. If Trump, The Proud Boys and The Fake National Guard were going to stain the American flag then I was going to deal with it like a Weimar German. I danced on a floor of fire as America burned.

I took a spiritual left turn at Greenland and never came back. I embraced dancing and the dance floor with a passion I hadn’t experienced in years. I watched cybergoth dancers on You Tube with religious devotion, and when I got tired with that I turned to videos of Bob Fosse and Gene Kelly. I even watched Flip Wilson and Art Carney, who might have been dancing for laughs but still showcased an uncanny grace in the way they moved.

In early 2017 I began hitting the goth clubs dancing to darkwave, witch house, industrial and ye olde goth. I also went to electronica, trip-hop and dubstep shows on the side where there was some great dancing, too.

I’ve danced in crowded ballrooms and I’ve also been the lone dancer in an empty club with just me and the DJ. I didn’t give a damn; I came to dance whether there was anybody there or not. More than a few DJ’s marveled at my resilience in dancing non-stop to their music in an empty room.

A lot of clubs play dance floor favorites like I Sit On Acid By Lords of Acid, The Devil Does Drugs by My Life With The Thrill Kill Kult, Hallucination Generation by The Gruesome Twosome, and that Halloween song by Ministry, among others. These are tried and true hits at the clubs because they make you want to move.

Some DJ’s are pretty lazy, though. One immediately comes to mind that plays literally the exact same playlist every month and he gets away with it. The clubs are always jam-packed for him, so obviously people love his formula.

Sometimes a DJ works the dance floor into a frenzy, playing one song after another with the momentum building higher and higher, then they kill it by putting something really slow or undanceable on, and everybody slowly drifts to the back of the room. It takes a while to win us back over.

1.The Territorial Couple: Even if the floor is totally empty they’ll want to dance EXACTLY in your space, practically pushing you off the floor because they just have to dance where you’re standing. This is either a sign of annoying assertiveness on their part or they think you’re such an awesome dance they just have to shimmy right next to you.

2.The Jealous Boyfriend: If you’re a really good dancer then a girl might say a few too many nice things about your dancing to her boyfriend, and the next thing you know the boyfriend has to practically shove his way in front of you. This is his way of showing you and her who’s the boss, lol. Annoying as hell.

3.The Embarrassed Boyfriend: A lot of straight guys either hate dancing or are terrified of looking foolish trying to dance, so some try to goof around on the floor dancing like it’s just a big joke. I see this more at rock dance clubs than the goth ones, where masculinity is a big issue for some of these boys. 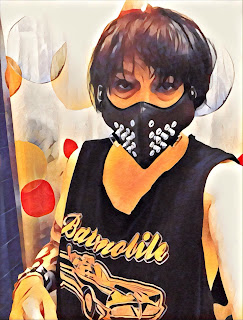 Let’s talk about masculinity and dance: at some clubs it’s assumed because I love to dance it somehow means I’m gay. On more than a few occasions out of nowhere an extremely aggressive dude just jumps right in front of me and insists on dancing right in front of my face. This forces me to make a professional basketball player’s pivot around them and dance in the opposite direction.

The scary part is when they won’t take no for an answer, and continue pursuing me around the club all night. And you ladies insist we men don’t understand what it’s like to be sexually harassed? I could write a book.

Men, men, men: I’ve been to some clubs where you couldn’t dance in peace because the security guards kept weaving through the crowd on the floor acting like they’re in a scene in some high-octane action film. Nobody in the crowd is fighting, there’s no trouble at all. Just a bunch of burly clods pushing and shoving their way around the floor acting important. That club’s gone now. Can’t say I miss it much.

But enough about everybody else, let’s talk about me: You need to really love to dance, love to dance no matter what’s being played because dance is life, dance is love, dance is poetry which doesn’t need words.

You have to love to dance so much it doesn’t matter that some sadistic DJ feels like shooting gallons and gallon of smoke into your face all night and filling the room with so much smoke you can barely breathe, or the DJ who wants the room completely dark so you’re literally dancing in darkness, no lights save for maybe a video of vampires and witches killing each other.

You have to love to dance so much that when people are sitting around in a complacent state you step right up to them and dance like a dervish in front of them, throwing down and daring them to get the fuck up and stomp with you. And they do. That’s better than goth, that’s punk as fuck.

You have to love to dance so much that after you dance for an hour at Bar Sinister you walk right by a couple (that two-headed monster again) and they both shake your hand because they tell you that they loved what they saw, it was something really amazing to them, not taking the piss, either.

And that’s the beauty of dance, if you can rouse a crowd into getting up and moving in several clubs or entertaining some people at another, then you’ve drawn a line in the sand, or better yet, on the dance floor. 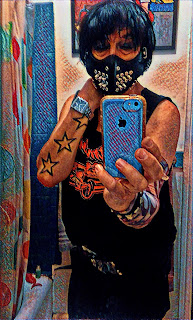