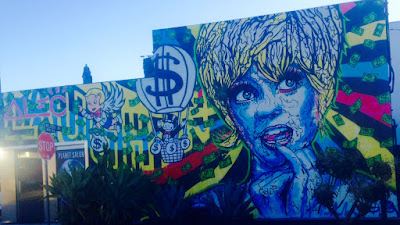 Although there’s a big difference between street art and graffiti the one thing they have in common is that they’re not welcome to the side of a building’s wall. What they both lack is the owner’s consent as they would a commissioned mural. Street art can be seen to some as a visual invasion, however beautiful it may be.

During my short time as a fashion courier I’ve run across several displays of street art that I captured on my cell phone, and I’m glad I did. To this day all of them have been painted over and are lost forever except in the memories of mine and other’s photographs. I’d like to share just a few of them with you.

Alec Monopoly’s art can be seen all over Hollywood and mostly employ the iconic character Uncle Pennybags from the Monopoly board game. Of all his works my favorite was the Goldie Hawn mural on Melrose one block west of Crescent Heights. Showing Hawn in her Laugh-In go-go dance resplendence with blue alien skin, it was an extra-large image startling to all those engaging in conspicuous consumption along the street of high-end fashion boutiques. 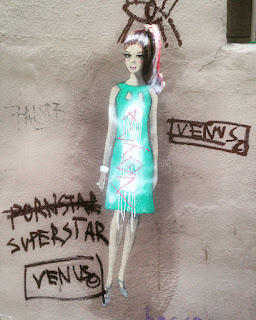 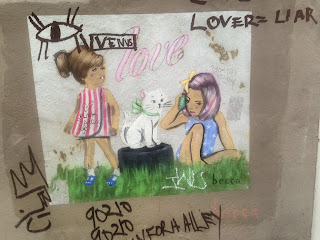 Then there’s the matter of Becca, a street artist who’s been posting her work spasmodically for the past twenty-plus years all over Los Angeles. This work was also posted in the alleys of Rodeo Drive, and in true Becca fashion is done in her classic children’s book style. While some may find her work surreal and even creepy in its uncorrupted innocence, I find something very peaceful and bizarrely reassuring in her refusal to seek social commentary in her work, or am I wrong? Is this piece meant to advise one and all that her piece is the only thing innocent in all of Beverly Hills, populated with the most decadent and corrupted souls in all of California? One wonders.

One wall which probably won’t have to lose sleep over being painted over is the vintage store wall on the corner of Melrose and Curson. An area at once chic, consumerist but funky, this wall is a great jam of multiple artists allowed to post their work together in one cool as hell gallery (of sorts). This is how Melrose Avenue got its groove in the first place, and it’s reassuring to know that some people still remember and probably revere the old days. The days of art over money, however short lasting that was. 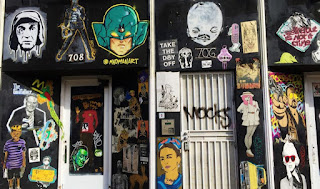