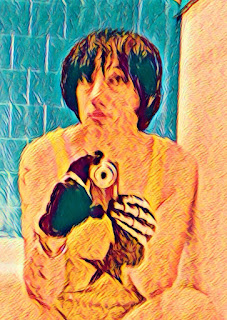 I was tracing and cutting fabric in the workroom when Dovina came in and happily announced to me, "I'm back! And I've got some cool swag!"

She came back from the blacksmith's shop and he always packed her down with weird metal objects we sometimes could use and usually couldn't. The girl came back to her workroom with bags filled with metal bracelets, bizarre rings that could be used for notions, and everything else imaginable.

What caught my attention, though, was a tiny plastic shopping bag she pulled out of her handbag. A furry spotted paw stuck out of the shopping bag.
"What's that?"
"Oh, look at this. Timothy was going to throw this in the trash and I said, 'Don't you dare!', and he said, 'Do you really want this?' I figured he needed a home".

Smiling, she pulled out a pelt of a bobcat, all four paws, tail and head intact. The head exposed a snarling cat face without a lower jaw. Whatever face the cat made at the time of its death and subsequent skinning, it didn't look terribly happy, gold eyes blazing and face permanently twisted in a snarl of anger that was there for keeps.

"Now, let's see, I think I'll put it...over here!" She did an eenie-meenie-miney-moe spin around the room until she found a red plastic hook around the sewing machine to hang the pelt on.
"There!" she smiled. "What do you think?"
"Well, it'll definitely have something to look at. It already has a disapproving look on its face".

For the next few days I came in working to the spectacle of having dead bobcat with face giving me a Fuck You look all day. It wasn't a Jean Paul Gaultier moment but I simply shut up and dealt with it.

Before I go any further let me explain a thing about Dovina. The relatives on her mother's side practiced witchcraft and a few of the relatives on her father's side practiced voodoo. There was also the time someone came over with a toy voodoo doll and had a power outage the next day along with a few other technical malfunctions in the house. And then there was the time she gave me a $2 dollar bill. I got rid of it right away at the market. Needless to say, the apples I bought all had brown, rotten centers in the middle. Hmmm.

Dovina slammed down the phone after getting yelled at by Miss Prewett, one of her fussier clients.
"Oh, that bitch! I was up all night sewing that stupid dress for her and now she says it doesn't fit her and I don't know how to sew! That cunt".
Her cell phone rang a little perky jingle. "Hello? This is she! Hi, how are you. What? They told me it was good. Insufficient funds? Ughhhh..."

Another client wrote her a bounced check and now she had to get on the phone and get them to pay cash to cover the bad check. The next day she appraised my work. "No, No, NO! All wrong. Do it again!"
Dovina took the dress and threw it in my face.
"Don't throw shit in my face!"
"My clients demand a certain standard from me and you can't deliver", she snarled.
"Oh, like the way you delivered to Miss Prewett?"
"FUCK YOU, ASSHOLE!!! GET THE HELL OUT OF MY ROOM! NOW!"

We fought like crazy for the next few days, and ironically kissed and made up in the apartment we had next door.
One week later: "Hey, why don't you put away that pelt? It's freaking people out".
"I don't know", she moaned behind her sewing machine. "It's kind of cute. Puddy Tat's so lonesome".

"Please put it away. Seriously, Dovina. The customers aren't cool with it".
She finally broke down and put away the pelt.
"Well! You won't have to worry about him any more. He's gone for good".

The fighting gradually stopped, the checks were all good and the customers were a little more civilized (most of the time; you can't change that much). Things were relatively back to normal.

But then things got weird, really weird. She went back to telling me I couldn't sew or do anything useful. She began sewing with all the lights out. Nobody could work with her because the workroom was draped in darkness. She hired inexperienced women to assist her and would quietly complain about them behind their backs. And then she simply left town and abandoned me.

The workroom was gutted and a new tenant moved into the space. It was like the workroom ceased to exist. Dovina now lived abroad with her parents and had no desire to ever see me again.

Fast forward two years later and I'm in Dovina's room, going through her things, all left behind for me to sort out. There was fabric, notions, belts, sewing needles, all matter of implements. I opened up box after box, storage container after storage container.

I saw a tiny pink plastic shopping bag at the bottom of a storage container. I felt something soft in it. I pulled it out, a thin spotted tail followed by a pair of furry paws and then topped with a snarling cat face with pointy ears. The bobcat was still in the house, looking right at me, staring straight at me with nothing but hate on its face.

It was then that I decided to finally do the humanitarian thing for this poor creature. I marched it down in its pink plastic bag to the dumpster and threw it in. From there on in it would be picked up by the Los Angeles Sanitation Department, dumped in the Disposal Grounds and given a proper burial. And then maybe the sun will finally set down on the moon.