Reality Begins With A Dream 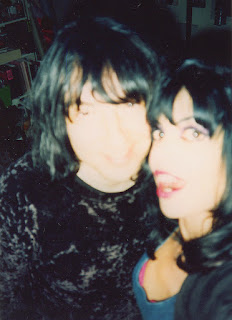 When a couple romantically fall in love with each other one of the most common cliches uttered is, "Let's grow old together". The reality of it is, and check your marriage vows is, "Let's get gradually ill together" or "Let's get poor together". Both happened to us which is partly responsible for the closing of Viva Rebecca LLC, also known as Suite 103.

In between designing her own fetish party clothes under the label Viva Rebecca she sewed wardrobe for TV, movies, rock videos and an endless chorus line of metal bands. Life was simple then; we didn't have a lot of money but we had each other and the fetish parties we'd go to to sell our weird clothes. She was the designer and I was her partner. Ahem.

In the beginning Viva Rebecca headquarters was our living room in a small apartment in the Miracle Mile district, which was largely inconvenient until the Northridge Quake of 1994. The hundreds of after shocks we experienced were largely tempered by our sleeping under an army of indestructible sewing machines largely made in the 1920s and 1930s.

International television camera crews from Canada and Germany filmed us in our native habitat working and goofing around. We were famous but broke until a government agency finally picked me up for permanent employment. Then the money rolled in, quickly followed by a move to newer digs in a soon to be trendy hipster neighborhood.

Viva Rebecca was still located in our spacious living room with me helping out diligently on my time off from working for the LA County Department of Children & Family Services (who still have me listed in their phone book after all these years!).

In 1999 our next door neighbor, a very old, eccentric shut-in accidentally died (his portable television fell on him in the middle of the night - he slept on the floor). When the apartment was up for rent we moved in and turned it into the new home of Viva Rebecca. Things were getting better.

I still managed to find time to help Rebecca with her projects, even sometimes getting up in the middle of the night in my pajamas to help her with an all-nighter. I could always be counted on to trace patterns, cut material and even do some light sewing duties. Rebecca thought I was great.

Two years down the road I transferred to the Executive Office at the LA County Board of Supervisors for a radically large promotional position and a much higher salary. Rebecca was doing well, too. She was getting more popular and in demand for her ability to finish projects ahead of schedule. We were both getting hot in our careers.

Getting hot in your career largely means you're more in demand by everyone and have less time to goof around, party, see friends, vacation, you name it. Rebecca didn't even have time to sleep any more; the all-nighters were happening more and more. We had money and no freedom.

I was the first one to crack: in 2011 I walked out on the Board of Supervisors. The mental abuse I endured there was like none I'd ever experienced. There were weeks when I was called on the carpet by management at least five times a day. The discipline at that job was severe to the point of insanity. My insanity.

After leaving the Board I still worked as Rebecca's assistant - projects included a great fruit juice commercial building a monster truck designed like a poodle, and then there was the Twisted Metal project and I did some scattered work for LA County.

When Rebecca was on the road working I'd go into Suite 103 and sew up some great shirts or accessories for myself. I had a lot of fun sewing things for myself and learned a lot about menswear that way. I even managed to find time to design and sew some dresses for Rebecca!

I saw less and less of Rebecca. Either she was doing more all-nighters or going on the road working on more sewing jobs. When Rebecca returned from these jobs I would offer to help and she refused, no longer wanting my help. My best was no longer good enough.

Because of the new demand for her to sew for an endless army of stylists there was no longer any time to design or sew Viva Rebecca originals. It was over. The jobs were never ending and Rebecca took them all, mostly as a one-man band. It wouldn't be exaggerating to say she did the work of a ten-man crew all by herself in 48-hour spurts. I hardly ever saw her.

When she did accept assistance it was largely from women who "liked fashion" but had no real sewing skills. When I occasionally offered to help I was turned down flat by her. She finally reached a point where she couldn't run the whole show by herself any more. Viva Rebecca had been run into the ground.

Physical and mental health problems in addition to astronomical debt closed down Viva Rebecca. Having had enough, she decided to close down the work shop for good. Many of her clients didn't take her decision very seriously, still calling with projects they wanted her to work on.

For weeks Rebecca worked hard at closing the workshop down. I was left with putting the finishing touches to clearing out Suite 103. It was one of the saddest experiences I've ever had.

Rebecca left for the next three months to convalesce with a nurse, and I think it's all for the best. She needs a little time to re-evaluate things and understand what's really important in our lives. Yeah, there's still "us" as far as I'm concerned.

After 16 years I'll always remember Suite 103 and miss the early years, but what it turned into won't have me missing it too much. Things may come and things may go, but we'll still be here. Someday we'll be together. 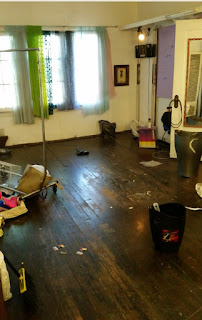