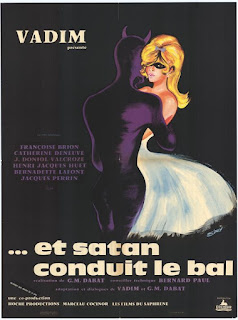 Lately in my sojourn across You Tube I happened upon a channel that has so many goodies lined up that I'd be a wretched creep not to share it with you. It's called Belles Actrices and if you like French & Italian films from the Fifties and Sixties you're going to hit the motherlode. There is such an embarrassment of riches in terms of great obscure foreign films that you won't be able to decide which movie to watch first.

Every film features a great European actress in some obscure movie you've probably never seen before: Catherine Deneuve, Elsa Martinelli, Claudia Cardinale, Jane Fonda (during her French period), and a whole bunch you've never even seen before. While some of the films I viewed were directed by Julien Duvivier, Claude Chabrol and Roger Vadim, many of them were directed by an Italian I've never heard of before: Mauro Bolognini.

How Mauro Bolognini flew under the radar for so many decades without attracting the attention he deserved is a mystery to me. His films are provocative, intelligent and have some of the best visual composition of any films I've ever seen.

And The Devil Leads The Ball, 1962/dir. Grisha Dabat - A French teen noir starring a very young Catherine Deneuve, Devil is the tale of Eric, a very spoiled, arrogant teenager who racks up an expensive roadster which naturally doesn't belong to him. The garage he borrowed it from gives him 48 hours to come up with the cash to pay for the damages or have his legs broken.

With no money to pay off the debt he runs off with his rich girlfriend (Deneuve) to a teen party pit where two other couples get high and trade partners. The usual teen movie sex play goes on until Deneuve's rich daddy shows up and tells Eric to dump his daughter or, you guessed it, he'll break his legs. It's easier said than done because Deneuve clings on to Eric like a new born puppy dog. It's not easy being a kid! Also starring Bernadette Lafont. 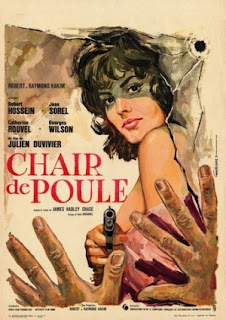 La Notte Brava (The Big Night or Bad Girls Don't Cry), 1959/dir. Mauro Bolognini - Working with a script co-written by Pier Paolo Pasolini, you can bet that this film will be gritty and sleazy. The film begins with two prostitutes (Elsa Martinelli and Rosana Schiaffino) brawling on the street, only to have it broken up by three joy riding yobs who pick up the two hookers and take them to a fence who'll pay them for stolen war rifles (?). Yeah, it's pretty weird.

More guys and hookers get picked up until the yobs decide to ditch the hookers in the middle of nowhere, not realizing that the hookers have snatched the fence money behind their backs. Realizing this, the boys hurry back to the empty countryside to find the sneaky hookers and get their dough back.

Careless (Senilita), 1962/dir. Mauro Bolognini - Based on an Italo Svevo novel, Careless stars Anthony Franciosa taking a break from his normal spoiled playboy roles to play Emilio, a plain, dullsville office clerk madly in love with Angiolina (Claudia Cardinale). Angiolina is all sweetness and virtue at the beginning of the film, until 20 minutes in she does a complete 360 and becomes progressively more and more slutty with all the men in town. Every time Emilio goes out on the town he catches Angiolina with a different man, acting looser and looser as the film progresses. Sounds like most of my ex-girl friends!

Bolognini's compositions are really outstanding in this one, esp. a scene where Franciosa's agonizing behind a stone column with a ridiculously steep stone staircase descending to the left of him in utter darkness (dig the heavy symbolism). Where the fuck is The Criterion Collection when you need them? Highly recommended. 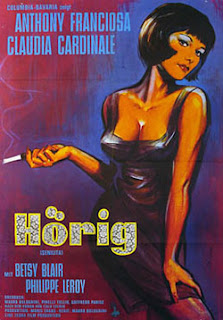 Wise Guys, 1962/dir. Claude Chabrol - One of Chabrol's earliest efforts, this is a sort of malevolent Jules & Jim about two guys and a girl running around reaping anarchy wherever they go. Comedy doesn't really suit Monsieur Chabrol and it shows: the humor is mean spirited and poorly staged. It's still worth a view for its strange morality play - the climax is too weird, and the performances by Jean-Claude Brialy and Bernadette Lafont (yes, her again) are top notch.

Highway Pick-Up (Chair De Poule), 1963/dir. Julien Duvivier - Based on a noir novel by James Hadley Chase, the Robert Hossein movie is about an escaped burglary suspect who hides out in a beat gas station run by a friendly fat guy and his hot, banging wife. Faster than you can say Postman Always Rings Twice, the sticky wife finds out Hossein is the escaped safecracker from the newspapers. She blackmails him into busting the gas station safe and proposes they run off together. Guess what happens?

Three Faces of a Woman, 1965/dir. Mauro Bolognini & Michelangelo Antonioni - Three Faces of a Woman stars Soraya, former Persian princess divorced by the Shah of Iran in the Fifties for her inability to bear him any children. Following the divorce, she fled to Europe in hopes of becoming a hot Italian starlet, which obviously didn't take off much. While she isn't very pretty and can't act too well, she appears well suited for the trilogy of stories presented in this picture.

The Antonioni segment is about a Princess who's about to give her first screen test and she's just a bundle of nerves and having second thoughts, etc. This is notable for the wild set design and angular composition, which is really a feast for the eyes. The Bolognini story fares much better in that she's married to Richard Harris, who can't deal with her stardom or the constant barrage of paparazzi accosting them wherever she goes. There's a wild scene with a fashion photo shoot which has to be seen to be believed.

The third segment is some weird comedy thing with Alberto Sordi that doesn't really go very far. It's a bad sex comedy type thing, a dime a dozen back in the Sixties. Although the film is called Three Faces of a Woman, I have never seen so many hair and costume changes on one woman in any film that I've ever seen (more than What A Way To Go!), so if you hated the way Soraya looked a minute ago, don't worry, she'll look better in the next scene. This movie's definitely 100% weird!

What's surprising about all these movies is their lack of DVD release or even TCM/Sundance broadcasting. These are all pretty decent films that are worth a watch, and even the lesser ones deserve a view. Just remember that you have to click on the "CC" Closed Captioned circle on the far right of the play slider to get your language preferences. You can even choose your subtitle color and opacity controls. And don't forget, Mauro Bolognini lives! 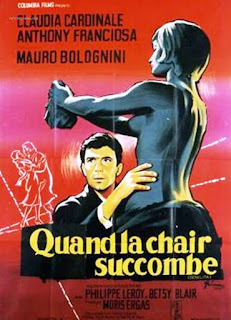