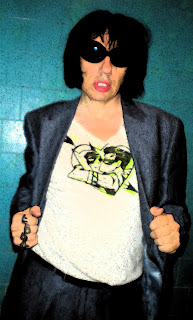 It's often been said and if it hasn't I'll say it, anyway: New Year's Eve is the holiday you spend with the family you want as an antidote for Christmas, the holiday you spent with the family you didn't really want. Nobody knew that more than Chad Featherstone, former guitarist for the once up and coming band Black Mask. It being New Year's Eve, he threw his annual soiree at his live-in rehearsal studio.

The rehearsal studio had only two rooms: a large room taking in two-thirds of the space where bands could come in and rehearse and record themselves; and a small room in the back Chad slept in with a desk, a tiny kitchenette and an almost tinier bathroom. Chad laid out his drinks and snacks in the kitchenette area and threw everyone's coats on his bed. There were almost as many people hanging out in his crash pad than there were in the rehearsal room.

"Let's get this party started! Yaaaasss!" Chad hooted as he put an old, scratchy album on the turntable and cranked the volume so the music would engulf the studio, booming out of the studio's PA speakers. You could hear the needle loudly hitting the surface of the vinyl and the sound of scratches and pops amplifying all through the studio, and then the music would begin.

Chad's friends were by and large former members of Black Mask and the other bands that used to play shows with them ten years ago. All of the other former band members minus one were there partaking of the cheap wine and cheaper snacks - pretzels, chips and packaged vegetable tots with an assortment of flavorless creamy dips.

"KEEP ON DANCIN'!" Chad commanded, dancing with two girls half his age across the room. Hopes to engage in conversation with Chad were wasted because he tried too hard to dance with any girl he could get his hands on. That left the former members of Black Mask to hang around and talk amongst themselves.

Fred the drummer was jamming his face with creamy dip dripping off his ridged potato chips.
"Great party, huh?" he asked Sam the bassist's girlfriend, a skinny, shrill blonde girl.
"Oh, it's okay, I guess", she had a relaxed bitch face. "But why all the scratchy vinyl? Doesn't he own any CD's? It's a little weird, you know".
"Oh, you're gonna be like that, huh? Later", Fred jammed some more chips in his maw and washed it all down with a foamy wash of beer.

Other groups were milling around jamming beer bottles and wine glasses in their faces. Members of the Fifty Pound Gorillas were walking around in their leather jackets and mullets, hitting on girls regardless of whether they brought their boyfriends to the party or not.

Googie from the Gorillas yelled at Chad. "Chad! Dude! Are we gonna jam soon or what?"
"Yeah!!!! KEEP ON DANCIN'!" Chad quipped, bopping around to a moldy James Brown album.

Teddy, the other guitarist in Black Mask stood around staring at a series of blown-up, fuzzy Polaroids pinned up all over the walls of the studio. The pictures were hard to see because the lights in the studio were almost dimmed to the point of complete darkness.
"What are these things?" Teddy asked Fred, who had to pull out a beer from his mouth long enough to respond.
"Um, I guess these are pictures taken by Chad that he's putting on exhibit tonight!" he yelled over The Smiths' "How Soon Is Now".

"Far out!" Teddy yelled back, noticing that they were fairly bland snapshots of a red 1996 Ford Taurus parked in a field. Another picture showed a child's toy drum in an alley way. Teddy looked farther down the room towards the doorway where he saw a pile of color xeroxes of the pictures on display. There was a crude sign scrawled on colored paper which said, "TAKE ONE!!! SIGNED BY THE ARTIST!!!"

"CHAD!!! Is Sally coming tonight? That would be awesome!!!" someone yelled.
"SALLY! SHE'S TOTALLY COMING CAUSE TONIGHT IS THE NIGHT FO' SHO!!!" Chad madly danced to a new girl because the other two went off into the other room to get drinks.

Sally Baxter was the sexy lead singer of Black Mask who struck it rich with a new band she tactfully called Black Mask after she signed with Columbia Records. They signed her under the proviso that she dump the guys in her band, which she promptly did. They were replaced by a new Black Mask that sounded like a Holiday Inn lounge band, more new wave and less hard rock.

Nevertheless, when she wasn't on tour she still paid occasional visits to Chad's parties for some cheap wine and rock & roll slumming. And why not? Back in the day, Sally and Chad were the rock & roll couple, ready for marriage until Chad abruptly broke it off.

"God, I hope Sally comes by. She's so cool!" Sam gushed on hearing the news, which was received by a hard elbow in his ribs by his skinny, shrill girlfriend.
"KEEP ON DANCIN'!" Chad commanded, bobbing and weaving his head of blonde quiffle up and down like a mad boxer shadow boxing. Holding a wine glass in his hand, having it slosh around and barely spilling it over some girl. An old scratchy Blondie record piped up, sounding more tired than a record ought to sound.

The back door opened in the other room and Sally Baxter walked in wearing a vintage green velvet car coat with a cigarette dangling from her lips, holding a guitar case.
"Where's the jam session?" Sally Baxter demanded. Everyone's head craned towards her.
"SALLY!" Everybody yelled. People rushed her to hug her and kiss her all over.

Sally kissed everyone back except for Teddy and Sam and Fred's girlfriends, whom she assessed with a territorial sneer that only Sally could muster.
"You'd be better be cool to my boys or you'll be cruising for a bruising!" Sally wagged her finger angrily at them.
The guys all chuckled. "OH, SALLY! YOU'RE SO COOL!"

Since Sally was good and ready to jam someone killed the record player, draping the once noisy room to silence and prompting her ex-beau Chad to race in and demand what the fuck.
"HEY! KEEP ON-SAALLLLLYYYYY!" Chad roared happily. The once romantic couple hugged warmly.
Everybody laughed. Except for Sam and Fred and Teddy's girlfriends.

"So, all my boys are here. Um, wait a minute, somebody's missing, where's Mickey?" she furrowed her brow and tossed back her brown perm fetchingly.
"Well, uh, Sally, I invited him but you know him, he's a fucked up violent drunk and stuff. The last time he came here he threw up in the alley and the neighbors complained".
"Yeah, he's too crazy. He once threw up in my purse and when I went to the bank to deposit my check it was dripping with his sick".

"Fuck Mickey Katz!" Teddy howled. "He drinks too much and he used to ask for all kinds of free shit, remember?"
"Yeah, he's a sick dude", Chad sniffed, suddenly pensive and thoughtful. "Not held enough when he was a child or something".
"Is he coming or not?" Sally asked.

"He's probably outside rummaging through the garbage can. he probably lives there now!" Chad joked.
"Oh, you stop it, Chad. Just because he's homeless-"
"-More like hopeless!" Fred joked, dipping more chips, switching to Funyuns into a bean dip.
"He stayed at all our houses. He's just permanently homeless", Chad showed his tough love side.

"Remember how crazy he'd get when we'd play?" Fred chuckled wildly. "He used to bang his head against the monitors like a maniac! The bouncers would always throw him out and then ask him if he was with us, and-"
"-and we's say, 'No, Sir!' Hahahaha!" Sam finished for him.

"He always drank more than the rest of us and pick fights with everybody", Chad sighed heavily. "And then he'd always claim he was going to be this big rock star. Typical drunk guy talk!"
"Well, we had to listen to his fuckin' talk because he always carried our shit into the clubs and play bodyguard", Sally added.
"That was his choice, not ours!"

"Then there was the time he tried to kill himself and the Doctor at the Intensive Care Ward called you for permission to have him committed?"
Sally shuddered. "How could I forget? I need a glass of wine!"

"Mickey's just a loser, I guess", Sally shrugged her shoulders like an impish little girl. "Hey! Do any of you sailors have a ciggie banging around?"
"SURE, SALLY!" roared all the boys, reaching for their packs of smokes and anxiously groping for their lighters.

"Okay, you guys!" Chad clapped his hands. "Before we have our jam session I want to show this animated video I worked on about Elvis Presley's pet mosquito, it's really funny as shit, and by the way, I'm giving out free Polaroid prints by the door. Let the party rave on!"

Mickey Katz lay in his bed in his large apartment sipping on a shot glass of Goldschlager. He turned and smiled at his wife of twenty-two years. She was an ex-punk rocker like him. They still looked like a pair of old wolves, slim and with shaggy heads of hair.
"Happy New Year, baby", he said, kissing her lightly.
"Happy New Year, hon", she returned and sipped her Goldschlager.

"Oh fuck, they had me work until 5 PM today. They said that New Years Eve isn't really a holiday so I had to put in a full day today", he griped.
"Fuck those assholes. Well, we can sleep in tomorrow", his wife smiled and looked tired, too.

"Are you going to fall asleep already? We just got into bed and everything".
"The booze is so good, I'm gonna conk out".
Mickey grabbed the remote control to the TV set and turned on Dick Clark's Rockin' New Year's Eve. They both laughed at how stupid Dick Clark looked. Dick Clark spoke to the camera as if everyone watching was an 85-year old man from Krakow, Poland.

"What's he saying?" Mickey asked. He was clinically deaf. "Shit, I gotta turn on the Closed Captioning so I can read what that douchebag's talking about".
"I think he's introducing John Travolta. No, Air Supply. Dick Clark's getting worked up over Air Supply".
"He's such a whore", he chuckled. "Hey! Tomorrow after we sew up your dress let's go out to dinner so we can get out of the house for a change. I'll take you to that weird place down the street. Sound cool?"

Mickey's wife didn't answer because she was already fast asleep. Mickey laid back on his pillow and started drifting off himself. That one shot of Schlager and the inane captions on the television wore him out. Mickey finally gave up, drifting off into a deep sleep, should old acquaintance be forgot. 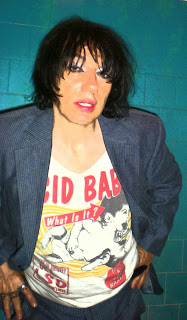