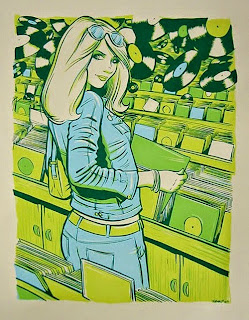 Work is a lot like love. People who look for jobs never get them. People who never look or don’t want them in the first place always get hired. I got a job as a rack jobber and I wasn’t even looking for one.

It was 1978 and I was sitting around my friend Donnie Albinoff’s cozy apartment. Cozy because between a plush sofa Donnie laid back on and the easy chair I sat on were book cases filled with tons of albums from every music scene and every era, so many that there was even a steamer trunk packed to the gills with albums.

We were tapping our feet like a pair of spastics to Donnie’s latest catch, “Eternally Yours” by The Saints, “Know Your Product” blasting through his speakers with the buzzsaw guitar ripping our ear drums out and a knife edge horn section ripping out punk rock soul.

“Fuck, this is great. Did you say this is so new it’s not even in the stores yet?” I sipped a beer he handed me.
“Yeah, and I also got this great Sham 69 album, too. We got a shipment from Sire today”, Donnie sipped his beer and got ready to light a roach. He showed me the roach and I did the “No thanks” wave.

“You’ve got the greatest job, getting all these cool new records even before the stores get them”, I gushed while Donnie sucked some weed smoke into his hipster lungs. Donnie paused for a moment and gave me a blank stare.

“You know, Sevrin”, Donnie talked while a gusher of lung clouds flew out. “You’re always making noises about needing a job to pay for rent and records and shit. Why don’t you come down to Spin Central and join the team? They’re always looking for new guys. I think I can get you in as long as you’re willing to work and you don’t make me look stupid. It pays okay and you get a discount on all the records you want”.

I mulled the offer over while The Saints were blasting in my face. “Okay!” I swigged my beer and tapped my feet harder.
“Good. I’ll put in a word for you tomorrow and with their okay you can come down later in the week and fill out a bunch of paperwork”.
“Great. Put on that Sham 69 album nobody’s heard yet”.

WEEK ONE: Spin Central One-Stop Distributors was a record distribution center in the Pico-Union district – corner of Venice Boulevard and Normandie Avenue. There was a cemetery around the block with a crematorium you could smell as you walked down the street towards work. It was a good appetite killer if you were too short to buy lunch.

My boss was Stan, heavy set in a dress shirt with slacks who was balding but wore the rest of his long hair in a pony tail. I never saw him smile. He seemed conflicted between looking hip and acting overly serious. It was a serious conflict for him. The only bands he swore by were Gentle Giant, The Dixie Dregs and PFM.

“Sevrin!” Stan barked. “Go to the loading dock with the dolly and pick up the new product and replace the pallet, let’s see, replace that Steely Dan with the new product. Take Freddy with you. Go now!”
Freddy was a morbidly obese man with short hair, a peach fuzz moustache and stained clothes who didn’t even look like he cared about music.
“Are you sure the boss asked for me?” He whined quietly.
“Yes, let’s get going! The truck’s here!” I insisted. Freddy trailed reluctantly behind me.

Freddy threw several boxes angrily while I held the dolly and held my breath. The burning dead were really pumping it out today. Freddy cursed under his breath, sweating through his Hagar executive shirt, pit stains spreading like a busted levee.
“Sevrin, I’m thinking of having Chinese for lunch. Are you in, man?”

I raced into the warehouse with the dolly, escaping the corpse stench.
“Cigarette break. Back in five!”
Freddy wandered off to smoke, leaving me alone to move the gigantic stack of Steely Dan albums off the pallet. The really big sellers were usually displayed in stacks on the pallets while the medium sellers or loss leaders were stocked in much smaller numbers on the shelves. It was my turn to grunt and sweat. Finally I got around to tearing the cardboard boxes open and loading the new albums on the pallet. Expecting the new Dead Boys album I was crushed to see hundreds upon thousands of Linda Ronstadt albums.

“LINDA RONSTADT LIVING IN THE USA”. Linda Ronstadt was rocking a secretary bob clad in satin shorts and roller skates singing the oldies. Boxes and boxes of Linda Ronstadt in roller skates. I felt my back almost going out humping all this vinyl product out. Freddy’s five minutes were way past over but he was still out somewhere.

I ran back out to get more product to stack on the pallets and instead of feasting my eyes on the new Captain Beefheart masterpiece I ripped open the boxes to find copies of “BOZ SCAGGS SILK DEGREES” to stack. A million seller in 1976, people still clamored for more Boz Scaggs two years later. I had to take a back break before my back broke.

“Are you having fun yet?” Donnie walked by, joking in his deadpan voice.

WEEK TWO: After buying records for five years at Morty’s Records it was wild to see the man himself, Morty Simon plucking albums from the racks to sell at his store. His face was set with steely determination picking out which albums he would retail that week. He pulled two copies out of the four Ramones albums we had in stock.

While he pulled a few copies of the new Kraftwerk album – too cool to be stacked on pallets, I made a fool out of myself and approached Morty.

“Hey Morty, how’s it going, man? It’s Andy, I come into your store all the time to buy your stuff. What’s happening?”
“Yeah”, Morty mumbled, just looking through me. What a dick.

When I ran into Donnie I said, “Hey, that guy from Morty’s Records just snubbed me. What a dick!”
“He doesn’t talk to anybody”.
“That’s a hell of a sales approach”.
“I’m getting Mexican for lunch. I keep smelling enchiladas”. 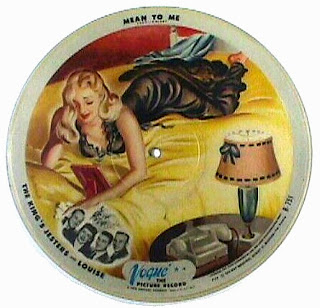 WEEK THREE: One night after work I was back sitting and drinking at Donnie’s apartment. “So, how’s Freddy working out in the warehouse?” Donnie sipped his beer.
“Oh, that fat fuck’s useless. He takes a lot of long cigarette breaks whenever shit gets too busy”.
Donnie chortled. “He doesn’t even smoke that much. He just camps out in the john either taking long, smelly shits or he’s busy playing with his tiny needle dick”.

“Stan really stuck it to me”.
“Freddy really hates you, too. He told me, ‘I hate Sevrin. He’s always shuffling his feet’”.
“He said that? Are you kidding? What’s wrong with shuffling your feet?”
“Nothing, he’s a big, fat idiot. I had to kick him out of here once when he came over. Check this out, as soon as I left the room to take a piss he made a pass at Dora”. Dora was Donnie’s girlfriend. “He actually said, ‘What are you doing with a loser like Albinoff’?”
“Shit! In your own house”, I popped open another beer.
“ON MY PROPERTY!!!” Donnie yelled, fired up a bomber and I gave the “No thanks” wave again.

WEEK FOUR: Stan ordered me to sit in a little room upstairs with a turntable on a desk, a relief to be off my feet from stocking records on pallets and on increasingly shrinking space on the racks.

Stan raced in with a stack of Al Dimeola and Neil Diamond records almost spilling over on the floor.
“Okay, Sevrin, I’ve gotta special job for you”, he dropped the stack of heavy albums on the floor. “I want you to slit open every album, take out each disc and put each one on the turntable. You see those magic markers next to the turntable?”
“Oh!” I pulled one out of the box. “Yeah, sure!”

“Great! Perfect! We have an important shipment going out to Bangkok tomorrow. Get going. Oh, and keep the door locked!”
Stan slammed the door shut and I got busy, wondering when my employee discount would kick in so I could buy the new Johnny Thunders album. Otherwise I’d have to go to Morty’s Records.

I spun disc after disc on the turntable studiously blacking out the Columbia Records logo ring on each disc, just thinking about all those Neil Diamond albums being sold in Thailand. I was known around the warehouse as being pretty quiet, quiet enough not to squeal that Spin Central was selling albums on the black market in Bangkok and all points East. Well, it was alright. I was getting off on the fumes from the magic marker.

WEEK FIVE: I was back in the Private Room. There were no magic markers on the desk but a pair of headphones and a stack of Waylon Jennings albums.
“Okay, Sevrin, we’ve been getting a lot of complaints about this inferior RCA Records product. I want you to open all these Waylon Jennings albums and play the first track and let me know how many of them skip and how many pop. Leave the albums in three stacks: The Ones That Skip, The Ones That Pop, And The Perfectly Good Ones”.
“Okay, no problem”.
“And keep the door locked!” He slammed the door shut.

I pulled the first disc out of the cover and immediately noticed how thin and light the vinyl felt in my hand. The disc even felt kind of hollow. I put on the first disc and adjusted my headphones.
Waylon sang:
“I've always been crazy and the trouble that it's put me through, I’ve been busted INTENTIONALLY HURT ANYONE One foot over the line I SHOULDN’T COMPLAIN Going insane”. Whoah. I tossed that one in The Skip Stack.

I pulled out the next disc and it was warped to hell. It felt more flaccid than a flat tire. I didn’t even bother playing that one. I simply threw it into The Skip Stack.

I put the next disc on, and listened intently: “I’ve always been crazy and the trouble INTENTIONALLY HURT ANYONE One foot COMPLAIN insane”. I threw that one in the ever-growing Skip Stack. Jesus, all this vinyl sucks. It feels cheap and it doesn’t play for shit.

I took my headphones off for a second and heard a bunch of yelling downstairs. I opened the door and looked down the stairs over the warehouse and saw a seeping flood of water coming from the bathroom.

Stan was yelling at Donnie.
“YOU’RE FIRED, YOU SON OF A BITCH! GET YOUR SHIT AND GET OUT OF HERE!!!!”
“FUCK YOU! I’M NOT A FUCKING JANITOR, ASSHOLE!” Donnie yelled back. “I DON’T CLEAN TOILETS!”
“YOU’LL DO WHAT I TELL YOU TO DO IF YOU WANT A JOB HERE!”
“YOU CAN’T FIRE ME!!! I QUIT!!! YOU CAN STICK THIS JOB AND THIS JOHNNY BRUSH UP YOUR ASS, MAN!” Donnie stormed off.

I walked back into The Private Room and locked the door. I thought about all those albums maybe making their way to Bangkok. I opened up the rest of the Waylon Jennings albums, put two in The Pop Stack, three in The Skip Stack and the rest in The Perfectly Good Ones stack. 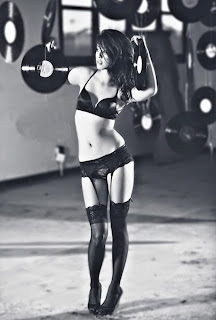