The Legend of Arthur J. and The Gold Cups 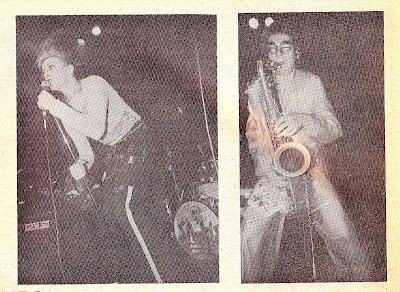 Describing a punk band from the deep, dark past has always been hard work but when there's precious little documentation on the band then it's well near impossible. I played in a first wave Hollywood punk band (1977-1978) called Arthur J. and The Gold Cups and although we played with every huge band of the era (Avengers, X, Germs, etc.) we never recorded, so there's almost nothing to go by, but that's never stopped me before.

Arthur J. and The Gold Cups was named after two Hollywood coffee shops that catered to gays; Arthur J.'s was on the corner of Santa Monica and Highland - it's now a strip mall. The Gold Cup was on the corner of Hollywood and Las Palmas and it's now a trendy tourist trap tattoo parlor. Both establishments provided late night hustlers and Quaaludes.

One block away from the The Gold Cup was a tiny alley off Cherokee Avenue with a huge steel doorway that took you down to a basement that held several rehearsal rooms; a long, cavernous room with a stage; and tons more space for anyone to do whatever they liked. This was The Masque, leased and operated by Brendan Mullen, founder and drummer of Arthur J. and The Gold Cups. 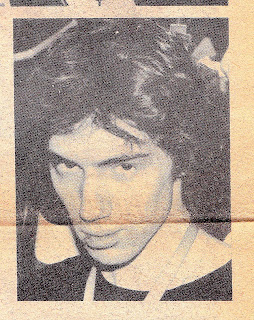 In Charles Martin Sharp's brilliant book on the Los Angeles avant garde music scene, "Improvisation, Identity and Tradition: Experimental Music Communities in Los Angeles", he described The Gold Cups as "attracting and bringing together people who were already interested in experimental aesthetics by merely advertising for members at The Masque".

In Mullen's book "We Got The Neutron Bomb" I am quoted as saying, "When I saw the bulletin at The Masque for Arthur J. and The Gold Cups, everything that was listed in that ad was right up my alley. I said 'this is the band of my dreams' cause it mentioned Ornette Coleman, Sun Ra, James Brown, The Soft Machine, T. Rex, The NY Dolls, and The Sex Pistols all in the same band. I couldn't believe it. This in some bombed-out punk basement? A pretty sick concept. Then I found out it was Brendan and Spazz (Attack, Gold Cups vocalist) and Geza (X, Gold Cups guitarist) and a bunch of other people who worked at The Masque who jammed there all the time for fun, so I rushed home to get my horn".

When The Gold Cups first performed it was on a Sunday night at The Masque. I passed on playing the first show because rehearsals were a shambling mess with no direction all, and I lived to regret not playing that night because the band was simply amazing. On stage there were three Deadbeats (Geza, Pat & Scott), The Moreland Brothers from The Skulls, Hal & Kelly (Weirdos roadies), and Brendan on drums.

Center stage on vocals was Spazz Attack, so named for simulating a full blown twitching and drooling seizure and performing eye-popping back flips - he always landed on his feet, brilliant. In addition to being a brilliant acrobat Spazz also designed his own punk-bondage fashions. He had a crazy habit of dyeing his hair - two, sometimes even thrice a week. Ouch! He's notorious for his strait jacket seizure in Devo's classic "Satisfaction" video. It's right after Booji Boy sticks a knife into a toaster. 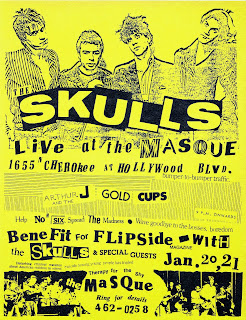 The band sounded like they were combining The Standells with John Coltrane's "Ascension", furthering the punk big band sound with a dense wall of sound: two guitars, two keyboards, a horn section and drums that played whatever the fuck it wanted to. The band always returned to Earth by drifting into The Soft Machine's "We Did It Again", which sounded more like "You Really Got Me" than the hoary psych classic, but that's the point. Musical anarchy made reality, and not just sloganeering about anarchy from the musically structured punk bands.

Although they only played for half an hour it was the greatest drag noise band of all time, Brendan, Geza and Scott wearing makeup and dresses serving up some Albert Ayler realness. I couldn't kick myself hard enough for boguing out on this awesome punk display!

I finally pulled the stick out of my ass and returned to the band a week later and toughed out the rehearsals - try getting nine mentally disturbed musicians to show up to rehearsal at the same time. Mission impossible! We ended up learning a few ridiculous covers, like The Beach Boys' awful "Long Tall Texan", the Cal Worthington used car ads commercial jingle, The Challengers' surf classic "Out of Limits" and we also did "Miserlou" (aka the Pulp Fiction theme song). "We Did It Again" always got played every six minutes.

I wore a mask on stage every time in honor of the now departed Marc Moreland, who wore a mask that fateful night on stage, to maintain the tradition of masked musicians. This not only got me attention when we played but I even scored a pic in Slash Magazine when our show got reviewed. Unfortunately nobody knew it was me on stage. I was always in disguise! 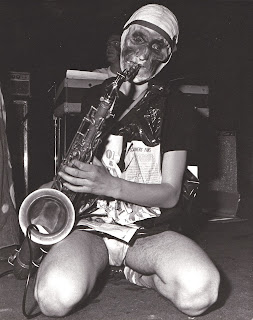 Reviews for the band were always hateful - the LA Times said our "joke wore thin" and even Slash Magazine said we were "annoying". I've met both reviewers in person since those reviews and I assure you these are the two most pompous, humorless people I've ever met, so the reviews weren't terribly shocking.

Since Brendan promoted the band he'd package three-day weekend shows at The Whisky A Go Go with us playing every night and a revolving door of punk bands supporting us. We played with The Avengers, X, The Alleycats, The Dils, Negative Trend, Black Randy & The Metro Squad, The Plugz and The Germs.

The band had one particular fan at the time: running down to LA after his band's legendary show at Winterland in 1978, Malcolm Maclaren saw the band perform at The Whisky and enjoying our penchant for shambling punk covers, he returned to England to produce "The Great Rock 'N Roll Swindle" featuring, you name it, shambling punk covers of songs like "My Way" and "You Need Hands". Oh well, it was cool seeing him laugh his ass off at our show.

With the band's advancing notoriety new members joined: Paul Roessler (Screamers, Nina Hagen) on keyboards, Hector Penalosa of The Zeros on bass, Steve Berlin of The Blasters on sax, Jeff Jourard of The Motels (!) on guitar, KIra Roessler of Black Flag on bass. It was a busy rehearsal studio.

The usual humbug broke the band up: a side project called Hal Negro & The Satintones featuring half the band doing awful lounge music covers, combined with a more polished and ordinary set of covers (Love Potion Number Nine, Let's Get Together from the movie The Trouble With Angels). The drag and the noise disappeared, no fun. Plus some of the members took the band way too seriously.

Geza left to pursue his own band Geza X & The Mommy Men and became one of the foremost producers in the industry, Spazz joined Toni Basil's dance troupe, Pat Delaney became a college professor and Brendan wrote several successful rock biographies. Everyone left and did better, anyway, even me.

Slash Magazine ultimately delivered the best eulogy for The Gold Cups. It went something like this: "One of the most lunatic outfits to hit the scene, but unfortunately one of the flakiest. Made up of various outcasts from other bands, The Gold Cups also featured some inspired fringe cult figures. In limbo at the present, but if everyone involved (all 250 of them) ever learns to show up at rehearsals at the same time their long promised comeback may add a welcome touch of madness to concert nights. Probably forever unrecordable". 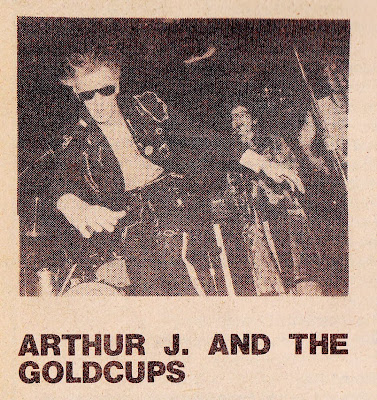 To read more about Spazz, Geza and Brendan pick up "We Got The Neutron Bomb: The Untold Story of L.A. Punk" by Marc Spitz and Brendan Mullen, available on Three Rivers Press.

"Improvisation, Identity and Tradition: Experimental Music Communities in Los Angeles" by Charles Martin Sharp can be read via Google Books.