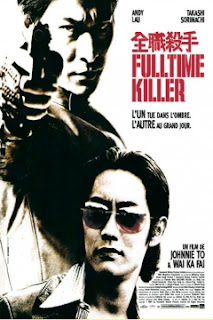 Full Time Killer is a brilliant crime film that starts at a kinetic-cum-frenetic pace and maintains its breakneck tempo all through the movie. Directed by Johnnie To and Ka-Fai Wei, it's one of the most exciting suspense films I've seen. Full Time Killer is the story of two hit men, Ono (Takashi Sorimachi), a Japanese: quiet, expedient and efficient like a ninja, while the other, Tok (Andy Lau), a Chinese, is loud, sloppy, and showy in his leather rock star outfits, completing his kills by throwing his arms up in the air like Neil Diamond after a big concert. Needless to say, Tok is a movie buff and loves spectacles. Tok is told over and over again by his boss Ice that Ono is the greatest hit man in the East, far superior to Tok, sending him on a rampage to upstage his Japanese superior. What results is a series of assassination upstaging between the two that recalls Spy Vs. Spy comics at its most devious.

The film opens with Ono performing a hit at a Malaysian train station, almost cock-clocked or I should say, kill-blocked by an old school chum. Ono executes his hit and then, in a fit of pique, shoots down his classmate, alerting Interpol policemen of his crime.

While Ono is out killing people in public places his cleaning girl, Chin (Kelly Lin), moonlights as a clerk in a Japanese video store (in Hong Kong). Tok,a regular at the store asks Chin out for a date in Bill Clinton mask, his tribute to the surfing criminals in "Point Break". His keeps his Clinton mask on when they go out to the movies. She takes a liking to him even though her heart belongs to Ono, thus creating a weird romantic triangle that recalls "Jules & Jim" or "Butch Cassidy & The Sundance Kid" in a perverse way.

Tok's dance card is pretty busy, teaching Chin how to hit a target from a high-powered rifle and then executing a hit in the middle of downtown Hong Kong (looking a lot like 6th & Flower by the Bonaventure Hotel in LA). Ono takes pictures of the hit from a balcony in the distance and faxes them to Interpol agent Lee (Simon Yam), who's heading the hit man crackdown. It's interesting how many hits occur either in train stations or around vehicles, establishing the effect of death amidst constant motion, like lions in Africa pursuing a herd for a kill.

Ono's hit in Singapore is completely expected by his victim with him realizing that his manager must have sold him out by informing them of his attempt. To make matters worse, Tok is shooting from a balcony nearby at Ono, trying to kill him. This scene recalls countless western films, and in fact creates a cowboy movie shootout vibe all through the picture. Now that Ono's cover is completely blown his apartment gets busted into while Chin's cleaning up, recalling the way his last cleaning girl was murdered, only this time Ono comes to the rescue. With both the organization and Interpol both nipping at his heels Ono and Chin need to escape from Hong Kong and vanish from everyone.

After watching his entire squad killed by the two hit man in a hail of bullets, Agent Lee suffers a nervous breakdown and leaves the force, drowning in a sea of depression and Chinese beer. He takes a break from drinking to write a book about his Ono and Tok manhunt and how they both got away, but in his words, "There's no book without an ending".

Lee gets a phone call from Chin, giving him the ending he needs for his book. She related the story of her escape with Ono, who finally confesses what he did for a living (or should we say a killing?). She then talks of one night in a bar where Tok joins them at the table, buying them drinks and telling Ono they're going to play a game a called Metal Slug to the death.

Ono accepts and the two have a final showdown in a Chinese fireworks warehouse, giving us a brilliant climax to an already exciting film. Chin gives Lee an ending to his book and then disappears into the night, letting us know that one hit man died and the other lives on, but which one is it? You'll just have to see Full Time Killer to find out.

Everyone in the film gives a perfect performance, Lau terrific as the arrogant showman and Sorimachi just as awesome as the stoic killer. Only Lin's performance is a little wobbly as the girl torn between two killers. You can pretty much tell who she likes more and doesn't really have us fooled. Yam is also excellent as the police chief gone over the edge without resorting to cartoon hysterics. Full Time Killer never feels cartoony and in fact serves up some of the best cowboy gunfights and shoot-em-ups ever filmed. 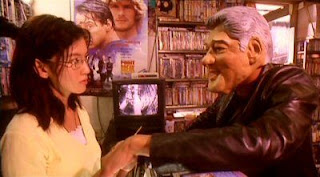