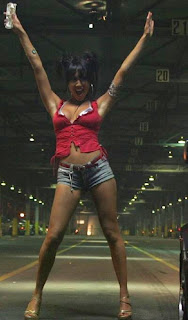 You can't beat a nutty action film, and it doesn't get nuttier than French Canada's Nitro. Directed with verve by Alain Desrochers, Nitro is a super-charged action film from French Canada spoken in Froglish (French-English, mostly French. Like most action films if your park your brains at the door you can still have a good time watching this nutty high octane opera.

Julien (Guillaume Lemay-Thivierge)is a former street racer (with the racing sobriquet “Mad Max”) gone straight with a wife and stepson, now working as a construction worker. When his wife Alice goes into a coma needing a heart transplant he decides to re-enter the street race game to scare up the big swag needed to get her a heart transplant.

He enters an exciting late night race hustling all the young dudes who don’t remember his champion race past. When someone eventually remembers and outs him as the legendary Mad Max they deny him his cash winnings and a baseball bat battle ensues. He gets the dough, of course. But it’s not enough. 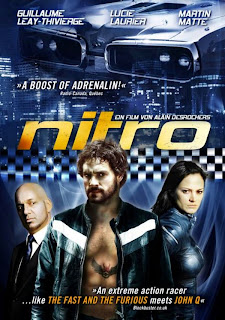 A hospital friend tells him that Alice is so far down the list for heart transplants with hearts being so scarce, anyway that she’ll never make it long enough to live. Of course, French Canadiens don’t know about artificial hearts because then there wouldn’t be a movie. So, Julien comes up with a great idea: steal a beating heart from a living person.

Julien returns to the strip club where his ex-girlfriend Morgane (Lucie Laurier) works. Morgane was also a street racer like him, but they broke up because he caught her making it with the sleazy club owner, Avocat (Martin Matte. Julien strikes a deal with Avocat in front of his gang for a heart. Avocat tells him that a heart can’t be supplied without a proper blood type. Julien feigns stupidity so he can hear the entire gang recite their blood type. When one unlucky bastard cops to being A Positive (Alice’s type, apparently) Julien kidnaps him at gunpoint, giving us a pretty exciting chase scene, highlighted by a fistfight inside a car while Julien keeps his pedal to the metal at 90 miles an hour.

Julien drags the thug to the gangsters’ doctor, a disbarred veterinarian, who extracts the poor bastard’s heart out and hands it to Jules in a red biohazard case. He dashes away with the cops in hot pursuit, and for good reason: the thug he killed was an undercover cop that infiltrated Avocat’s gang. 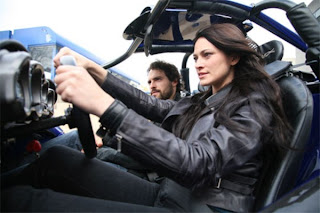 Julien hides out in Morgane’s flat, much to her scorn. Who can blame her? He dumped her for the dull Alice, who is mostly seen in the hospital making boring New Age speeches about the molecules and tout la planetes. Morgane helps him slip into Alice’s hospital courtesy of her T. Rex, a three-wheel motorcycle car that has to be seen to be believed. The Campagna T. Rex is worth the price of the movie.

To make a long story short, one girl dies and the other doesn’t – yup, spoiler – and even though the movie is silly it’s still a fun action film. Ironically the two best characters are the scumbag gangster Avocat with his shaved head and Abe Lincoln beard (yuck) and the awesome Morgane, another great bad girl added to cinema history. Lucie Laurier is definitely a star and hopefully will be seen from again. 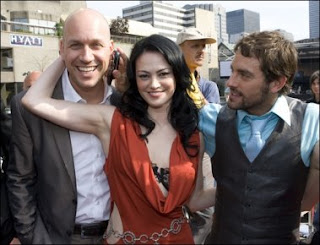 When I first heard about "Broken Flowers", the Jim Jarmusch film starring Bill Murray, I feared yet another dreary, tired old guy movie like "Lost In Translation". Thank hebbin I was wrong!

“Broken Flowers” puts a new spin on the tired old joke, “I don’t have any kids that I’m aware of”. Bill Murray plays Don Johnston, a successful software developer who gets a mysterious message from an anonymous ex-girlfriend that she bore him a son. Murray subsequently goes on a cross-country odyssey (in a 1996 Ford Taurus) searching all his exes in pursuit of finding out which one had his son.

What follows is a spin on the old “What A Way To Go” formula, where we meet his exes and how different they are apart from each other: Jessica Lange is a pet psychiatrist, Sharon Stone is a NASCAR racer’s widow, Frances Conroy as an ex-flower child turned Stepford wife and Tilda Swinton looking more like Patti Smith circa “Horses” (1975) than Patti Smith ever did. The resemblance is remarkable!

Just like “Lost In Translation” we have a few Lolita moments here, in fact Stone’s daughter Lolita walks around naked for Bill’s enjoyment, and a young florist named Sun Green who medicates his bruises. Although everybody in the film is great it’s clearly Murray’s show all the way, exhibiting the best deadpan humor he’s exhibited since “Ed Wood” (“I’m stalking people in a Ford Taurus!” he complains to a friend). The scene where he tries to hammer down Conroy’s awful boiled julienne carrots is classic, too. Well, this is hands down Jim Jarmusch’s best work in years and, The inside joke at the end is awesome and yes, even Sharon Stone actually looks like she’s enjoying herself. It’s after the end of the world!