Give Booze A Chance

This is a promotional sticker for Suzi Quatro's album on Bell Records in 1974. That alone is funny because Bell Records was known for having wholesome, bubblegum acts on their label like The Brady Bunch and The Partridge Family. Once glitter rock hit America Bell Records cashed in on The Sweet, dropping them after one album, Gary Glitter, picking up Mud and Showaddywaddy for singles only, and Ms. Quatro.

You'd never believe it nowadays but there was a time when a girl pictured in a leather jacket and leather trousers was automatically dismissed as a "dyke" regardless of what her sexual persuasion was. Somehow her appereance dressed in something less than girly was threatening to the arena-rock sensibilties of some. When I looked around for the latest Suzi Quatro single at Tower Records on the Sunset Strip the artist file card said "Suzi 'Dyke' Quatro". Gee, I wonder why they went out of business. But Suzi had the last laugh; her first LA appearance at The Whiskey A Go-Go was sold out and she was awesome.

Here's a flyer from a memorable punk gig at The Masque featuring The Skulls. The late Marc Moreland used to have his clothes torn off him while he played wild, screaming psycho leads on his Gibson Flying V. Sometimes it got so bad all he had left on him was a pair of shredded boxer shorts and sneakers. Once even the shorts came off and he ended up draping himself in the US flag previously standing in the corner proudly. I got to sit in with The Skulls for awhile and it was a great experience.

It was also one of the very first shows played by my band, Arthur J. and The Gold Cups. We were a punk-rock big band that played skewered covers of all kinds, like The Soft Machine's "We Did It Again", which we played ten different times during our 30-minute set, pissing punks off in ways they thought they were too impervious to be irritated. Some of the other boys in the band included Geza X on guitar, Brendan Mullen on drums, Hector Penalosa from The Zeros on bass, and a host of others. 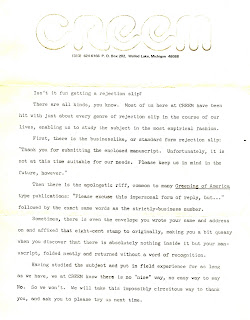 I remember reading the fine print on the Creem Magazine masthead where it said they aren't responsible for returning unsolicited contributions, which to me meant they didn't exactly refuse them, so I sent a few album reviews to Creem in 1972. It seemed pretty important at the time, because back then Creem Magazine was the best rock magazine around, reporting on bands like The Stooges and Roxy Music, which their larger counterparts Rolling Stone Magazine refused to acknowledge. Well, maybe my reviews weren't the greatest  ever written, but they couldn't be any worse than a lot of the in-joke nonsense they used to publish. At least I got this rejection letter from them that was sent on cheaply xeroxed stationery. What a bunch of skinflints. I guess they needed the money to buy dope for the next J. Geils Band arena concert. I wondered what kind of stationery they used at Circus Magazine.
(Click on image for enlargement) 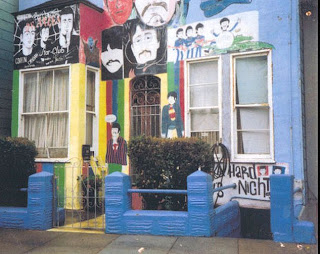 Rebecca's friend Jane painted her house in San Francisco as a shrine to her favorite band The Beatles. She obviously loved every phase that these talented chaps from Liverpool went through, as you can see. First of all I just want to say that her parents are the hippest people on the planet for allowing her to paint this amazing tribute all over their home. What makes this piece so brilliant is that the band image placement is proportionate to every phase of their careers, so you have the early "Hard Day's Night" Beatles down by the basement (early period), the 1966 Al Brodax - King Features Syndicate cartoon show Beatles (complete with crocodile) towards the middle, and then the 1968 Yellow Submarine Beatles way up on top, complete with "Paul Is Dead" reference. Three of The Beates look healthy but obviously Paul's face is painted red because it's all bloody from that alleged car crash.

After awhile the house missed a few upgrades and even The Beatles started to look shabby, so the neighbors began leaving notes on their front door offering to paint over this shrine, even offering to supply the paint for free. And to think, I thought people from San Francisco loved great art. By the way, don't bother trying to find this place in SF because it's long gone, just like the boys themselves. 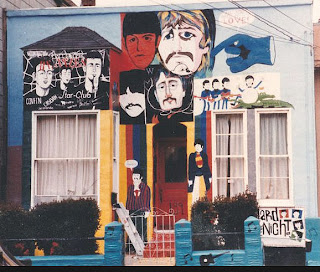 BTW, if this was my home I'd have a few quadrophonic speakers set up in front of the house blasting Beatles music all day, every phase of their careers from the Tony Sheridan - Cavern days to the Sgt. Pepper period to the Dead Paul Vs. Yoko Husband period (1970). I'd even throw in Ringo's "Sentimental Journey" album and the "Don't Worry Kyoko" masterpiece from Toronto. That would really give the neighbors something to talk about.

I love the range of music you mentioned in your blog. More Black Coffee please.

Although I don't follow music that closely any more I have about four decades worth of music memories to draw on.

BTW, the serial's called "Red Coffee" and will return next week. Thanks!

As long as you write a new story, I don't care what it's called.

I also miss the cowboy.