There Ain't No Santa Claus On The Evenin' Stage 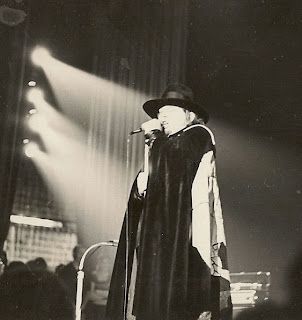 In early 1972 Captain Beefheart & The Magic Band released "The Spotlight Kid" and followed it up with a short tour that included a tiny movie theater in Long Beach. Since I was too young to drive my brother took me there and took these amazing photographs of the band in concert. Enjoy! 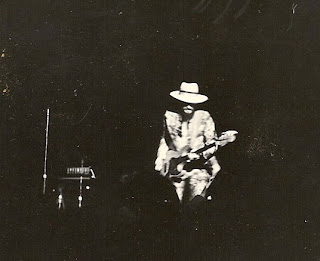 The show began with Rockette Morton playing a bass guitar solo that included the most vicious strumming of strings accompanied by a frenzied whirling dervish dance as he played. He brought a lot of magic to The Magic Band, believe me. 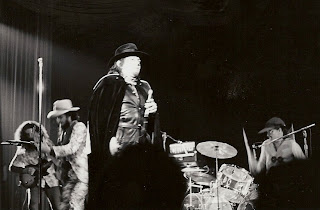 Don believed in giving the ex-Mothers of Invention work after Frank Zappa dismissed them, and pictured here is Elliott Ingber (aka Winged Eel Fingerling), Rockette Morton and Art Tripp III (aka Ed Marimba). Jimmy Carl Black also played that night, dubbed Indian Ink. On the next tour Roy Estrada joined the band on bass guitar under the moniker Orejon. 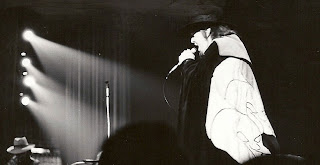 Don's probably singing "When It Blows Its Stacks" which the band would come out to, Zoot Horn Rollo's wailing guitar keening over Captain Beefheart's wolfman-like howls.

Pictured below is Don blowing his badass harp to "Click Clack" while Rockette Morton is doing his whirling dervish bass guitar dance. Zoot Horn Rollo is swaying like a fuzztone-fried California palm tree.
This was probably one of the greatest shows I've ever been to, and to say it changed my life would not be an exaggeration of any sort. Thanks for the music, Don and the band, and thanks again to my cool brother for taking me there and taking these awesome photos. 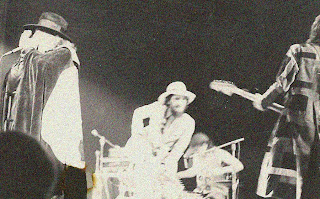