My Cup Runneth Over With Swill 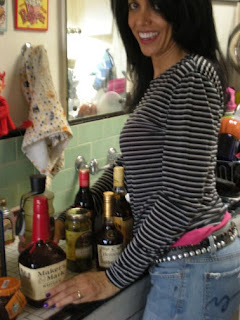 The first taste of alcohol begins in church/temple. Yeah, it starts with God. Like it or not. When you go to the house of the holy they pour that wine in your mouth and you're hooked. At the age of ten. Little boys get their first taste of sweet fluids, followed by a divine buzz. Let's thank the Lord and give grace. It starts there and builds into something unholy, of course.

And those boozy upchucks like the time you mixed Captain Morgan's Spiced Rum with Mickey's Big Mouth (yeah!) and you ended up vomiting in that lucky girl's purse. Hey, don't laugh, I'm sure Tommy Lee's done that dozens of times...and then scored.

3. Jack Daniels, making me pass out on my anniversary, talk about a Kentucky blackout, wake up and vomit, while the room is spinning watch Tom Servo and Crow rip on Arch Hall, Jr. on Mystery Science Theatre 3000.

5. Hennessy cognac, excellent for a cold when you have a chest full of flug and have to cough the green devils out. Once when I was tubercular I lived on cognac and donuts. Rock 'n roll, baby.

6. Greyhounds - Grey Goose vodka with grapefruit juice because orange juice is for babies.

7. Rye - booze of choice in billions of old noir movies and novels and kicks ass harder than bourbon. Tastes best in old Hollywood dives like The Formosa Cafe, aye laddie.

8. Manhattans - classier than martinis and tastier, too. Honest. My drink of choice at Jones Hollywood.

So whatever God hath wrought booze is thy destiny. Blame it on my Jewish upbringing; we have not one, but two holidays that encourage hard drinking: Purim and Simchat Torah. On one Simchat Torah I mixed so many different drinks that I perforated the lining of my stomach! Praise the Lord and pass that bottle, brother. 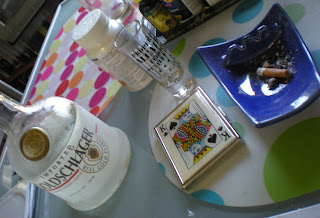 I'll drink to that! Cheers!

Recently introduced to the Greyhound. Love it.

Yum - I just had a greyhound at The Whisper Lounge the other night. Try it with ruby red grapefruit juice, it's out of this world!