Stuff I Burned From TCM, Part 10 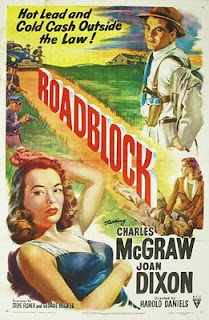 TCM has decided to somewhat circumvent the movie burners by issuing a series of DVDs called “The Warner Archive Collection”, which is no better than what we fans do at home. In fact, they’re not even DVDs, but DVD-R’s, just like us, and they’re bare-bones releases, i.e. no special features, no commentaries, nothing. It’s as if TCM/Warner Bros. authorized some guy at home to burn their films and then market it at high profit ($19 each). So for that reason, this will be the last edition of “Stuff I Burned From TCM”.

Roadblock (1951) – Charles McGraw takes a break from playing a cold-blooded killer in “The Killers” to play a cop on the take in “Roadblock”. This quick-paced noir potboiler is classic RKO Studio stuff: McGraw has to keep embezzling stolen money to keep his high price-tag girlfriend happy. Even she sees him getting out of control until he has a final showdown with the LAPD in the middle of the dried-out Los Angeles River. Edmond O’Brien played a similar kind of crooked cop in “Shield For Murder”, but I think I like this one more. Script written by the awesome Steve Fisher.

The Rag Man (1925) – Jackie Coogan (aka “Uncle Fester”) rose to prominence playing the title character in Charlie Chaplin’s “The Kid”, but acquitted himself later on in movies like this, where he plays a pesky runaway orphan who barges in on an old junk vendor’s heart and business. With the name of Timothy Michael Patrick Aloysius Kelly (…”and a few other names I’ve forgotten”), Coogan behaves like a Harvey Comics character in the flesh, performing such unforgivable stunts as convincing a rich man’s son to dump his entire vintage wine collection because the bottles are valuable. Pretty funny stuff.

West of Zanzibar (1928) – There’s a lot of brilliant Lon Chaney films neglected by DVD release, it was a toss-up between this or “He Who Gets Slapped”. This one wins out because in addition to being directed by Tod Browning, it also co-stars Lionel Barrymore. Chaney plays a magician whose wife and child are taken from him by a rival magician. He retires to a remote jungle village playing a character not unlike Marlon Brando’s in “Apocalypse Now”, complete with creepy African slaves. A young girl journeys to his jungle village where he tortures her, gets her hooked on drugs, only to find much too late she’s his long lost daughter! Sick, and has to be seen to be believed.

Paris Blues (1961) – The only reason I can see for this movie’s inability of DVD release are the music rights for Duke Ellington tracks or possibly Louis Armstrong’s estate maybe blocking this. Otherwise, this film’s chock full of excitement, Paul Newman and Sidney Poitier portraying expatriate American jazz musicians making the beat club scene with Barbie Doll tourists Joanne Woodward and Diahann Carroll falling for them. The bohemian night club scene is handled nicely with some gorgeous black and white cinematography. I found the faux Django Reinhardt dude with the heroin monkey on his back character fairly droll. This is one of the best jazz movies ever and a class act all the way. But hey, let’s not release this amazing burst of superfine coolness, let’s release more Jennifer Aniston chick flick crap. The decline of Western civilization continues. 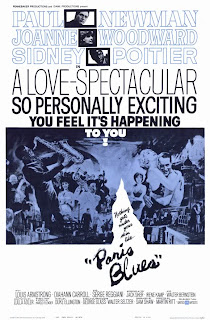 You have great taste!

Next week = the next episode will be a real nut buster.