The Man Who Sold The World 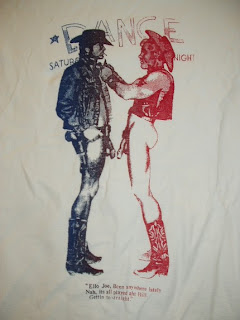 Last week Malcolm Maclaren, controversial manager of The Sex Pistols, The New York Dolls, and mentor to Adam & The Ants passed away at age 64 from cancer due to asbestos poisoning.

I first met Malcolm Maclaren in the summer of 1976 when I went to England to see The Sex Pistols. I was completely sold on them after reading a tiny review of them in the New Music Express. The Sex Pistols did a show at The 100 Club and I approached Malcolm and talked to him for awhile about possibly managing a band I knew in Hollywood (don't ask, they were horrible). He was friendly, polite, more than any other music industry nimrod I ever met, actually. He even gave me a Sex Pistols press kit which I didn't ask for, and still treasure to this day. His girlfriend at the time, the soon to be Dame Vivienne Westwood, was equally friendly and cool. I bought a leather t-shirt and rubber t-shirt from their clothes store on Kings Row, Sex. When I got back to Hollywood I told Rodney Bingenheimer about a great band from England called The Sex Pistols. He thought I was putting him on and laughed in my face. Dickhead.

A year later The Sex Pistols were the biggest thing in the United Kingdom and Malcolm Maclaren was a bit of a monster, advocating the beating of rock writers like Nick Kent. There were constant anti-Semitic remarks coming out of his mouth. Charming guy.

A year later my band Arthur J. and The Gold Cups played The Whiskey A Go-Go and Maclaren was in town with various Sex Pistols (Jones and Cook, but Vicious was hovering around somewhere). Our band played punk rock versions of silly oldies. Malcolm was in the audience and thought we were very funny. As soon as he got back to the UK he recorded what was to become "The Great Rock 'N Roll Swindle", featuring, yes, punk rock versions of old crummy covers. What an original guy.

"The Great Rock 'N Roll Swindle", purely Maclaren's creation, was disgusting, vile, a film that took a band that stole all its ideas from the New York scene (yes, he managed The Dolls but he pirated everything from Television and The Ramones), revitalized a decaying music scene and turned it all into an ugly cartoon. The only problem was thousands of kids still believed even if he didn't. The fucking hack.

By the early Eighties he made a string of bad hip-hop records (catch the wave!) and the first one sold but the rest of them tanked. People aren't half as stupid as the man that thinks he has everyone conned. The difference between Vivienne Westwood and him was that she truly believed in innovation and he simply used it as a device to put people down.

My memory of Malcolm is rooted in that first meeting when he was cool. It makes me sad to see people corrupted by their egotistical delusions and the destruction they create in their path. And that's why rock music is just a memory to me.
Posted by Andy 7 at 7:16 PM