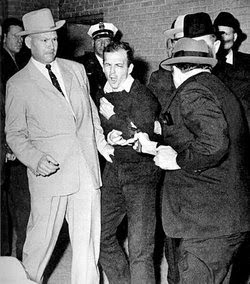 Washington Square Park (1 Washington Square East/New York City, New York)= I remember going to Washington Square Park when I was 16 years old with my Terrified Young Man face and enjoying the beautiful scenery. I made the serious mistake of staring at a tore-up black derelict counting his money, and he freaked out and screamed, “WHAT THE FUCK DO YOU THINK YOU’RE LOOKING AT, BOY??” He didn’t stop there, he just kept yelling and spitting up on himself and vomiting in his gray beard. Uncle Rufus was madder than a wet hen.
The following night I walked by the park and saw two drunken NYU students punching the snot out of each other, no doubt battling over who created the greatest foreign silent film of all time. “Battleship Potemkin”, maybe? “Pandora’s Box”?? Fucking film school students. But it’s alright, Washington Square Park is a real action kinda place. “Action” is the park’s middle name.
“Good for kids”? Sure, especially when NYU film grads are stompin’ each other's ass.

Beverly Gardens Park (North Santa Monica Blvd./Beverly Hills)= Everybody knows about this park. If you’ve ever seen a movie that takes place in Beverly Hills there’s always a scene shot there. Elliott Gould jogging by the thin trail circa 1971 with his mutton chops sideburns and Zappa cum Borat mustache and here comes Dyan Cannon jogging up to him and you can hear the lilting Burt Bacharach theme played by Herb Alpert and the Tijuana Brass, softer than a roll of Charmin TP to tickle yr. tense bunghole.
On one end is the glamorous Electric Fountain where Wilshire and SM Blvds. meet with lights shifting colors like a kaleidoscope, and I’m sure Elliott and Dyan will gesmeckt some witty Neil Simon patter as soon as the fruity trumpet music is over. It’s funny for a park, there is no swimming pool, no tennis court, but on Sundays there’s a grand funk Arts & Crafts Fair with all the landscapes of Newport Beach your eyes can handle.
Beverly Garden Park is a mere strip of a parklet, a mobius strip of sorts, but if you dig flowers, jogging and Bev Hills motor congestion you’ll feel like royalty.

Golden Gate Bridge (Lincoln Blvd/San Francisco, CA)= When I think of the Golden Gate Bridge a very distinctive memory comes to mind. My band toured in a van built for maybe four and there were six of us with tons of equipment and countless duffel bags of clothes jammed in. It was the dead of summer and there we were, racing up Interstate 5 to play some shows in San Francisco. We had just plowed through the Mojave Desert sweating like pigs, stripped down to t-shirts and tank tops with all the windows cracked open. The van stank of B.O. that hummed so hard it could’ve stripped paint off a battleship.
The temperature inside the van must have been 250 degrees and we were coated in greasy, grotty sweat. The sunlight from the desert was a blinding gold death ray. In the distance we could see the grand Golden Gate Bridge looming up ahead. As if in a sci-fi movie there was an enormous gray cloud hanging in the middle of the bridge, sitting there waiting like a big, fat bug.
As soon as we got on the Golden Gate we drove through the ominous cloud and everything changed from gold to gray. The chill hit us like an ice bath and we quickly slammed the windows in the van shut. Our dicks shriveled up quicker than a Minutemen song and we threw on our sweaters and coats. Suddenly we had to pee really bad!
By the way, the shows went great and Frisco has the best food (next to Chi-Town). I’ll be back next summer in my Long Johns. Yummy!

Will Rogers Memorial Park (9650 W. Sunset Blvd./Beverly Hills)= This is one of those spots everyone treats like a well-kept secret, so it’s a pretty popular “well-kept secret”. It’s a little block in the middle of residential Beverly Hills on Sunset Blvd. that exudes old Hollywood with its skinny skyscraper palm trees and Art Deco water nymph statue with fountain.
Although it’s gorgeous in the daytime it takes on a transcendental mood at night – you’ll think Chaplin, Swanson and John Barrymore are going to show up and sit next to you on the park bench. If you want a taste of old Hollywood it’s right here.

Sixth Floor Museum at Dealey Plaza (411 Elm St./Dallas, Texas)= The creepiest, most chilling thing on television isn’t some Freddie Kreuger bloodfest but a mini-series on A&E called “The Men Who Killed Kennedy”, an exhaustive study on the assassination of President Kennedy. The first thing my band did when we got to Dallas was go to the Book Depository and see the Lee Harvey Oswald exhibit. When I looked out the window over the grassy knoll and the overpass I got chills. In the dead of summer. To get the whole Kennedy assassination effect do what I did:

1. Go to the Book Depository.
2. Lie down on the grassy knoll, take photos, and smoke ‘em if you got ‘em.
3. Check out the fence by the railroad tracks where “the hobos” (assassins) all filed out.

After that walk around downtown Dallas and hang out in the old department stores, some have soda fountains. You’ll get an old Sixties vibe from that. It’s a creepy experience.

Statue of Liberty (Liberty Island/Staten Island, New York)= I love tall girls, the taller the better. The real stone fox is this girl from New York City, she don’t say much but she’s easy. She says, “Give me your tired, give me your poor”, doesn’t sound too choosy to me. Munchkin chicks go home. I luv her tall ass.
Posted by Andy 7 at 4:18 PM