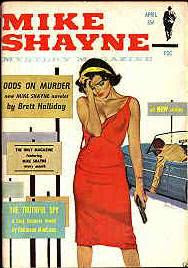 It all started when I was cruising around Culver City looking for an address with the news on KNX-AM radio. The news suddenly stopped and a radio show began. It was “Dragnet”, the infamous cornball cop show from the Sixties starring Jack Webb, only this was the Forties radio show version. I toughed it out, hoping I could get a few laughs out of it. I didn’t. It was every bit as good as James Ellroy at his most biting. The episode concerned a deranged World War II sailor missing in action after his wife on the homefront was found brutally beaten to death. Of course, it happened on Bunker Hill (downtown Los Angeles, right by City Hall). Jack Webb was brilliant and had me hanging in there. There was even a full orchestra and sound effects; it was like watching an old film noir with the images all created in your head. A blind man’s noir. The beginning of my love affair with OTR (Old Time Radio).

There’s quite a cult surrounding OTR and it’s not just composed of old fogeys. People like old crime films and they like spoken word and there’s a certain cerebral gratification in working out the images in your head in this day and age of A.D.D. cinema. OTR mp3 discs sell on eBay for only $7-10 apiece, and in return you get 100 episodes on one disc, maybe more! I listened to KNX-AM religiously and discovered some terrific shows:

“Casey, Crime Photographer”: Casey works as a meddling shutterbug for The Morning Express newspaper with his sidekick Anne Williams (even thugs respectfully address her as “Miss Williams” hoho), and episodes begin and end at their favorite bar, The Blue Note. The episodes are very well written, my favorites always have some psychotic femme fatale. My favorite is called “Road Angel” about a girl hitch hiker who’s a serial killer and murders male drivers. Aileen Wuornos, indeed! 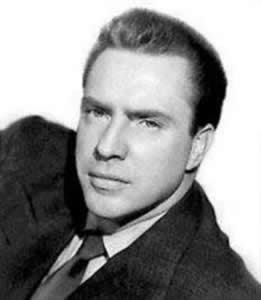 “Yours Truly, Johnny Dollar”: Edmond O’Brien, film noir king (“The Killers”, “D.O.A.”, “Public Enemy Number One”) played Johnny Dollar, insurance investigator who would solve crimes while listing his expense account all through the episode. “Expense account, $1.25 cab fare to the showgirls’ coldwater flat studio apartment”. O’Brien was very funny: seemed like Dollar cared just as much about his stomach and his pecker as he did about solving crimes. He was always eating and flirting with chicks. “I may need protection…from YOUR BATHING SUIT!” He was always introduced as “that fabulous free-lance investigator with the action-packed expense account!” When I started listening to Johnny Dollar I conducted insurance investigations for Los Angeles County, and he was a big hero of mine.

“Mike Shayne”: Jeff Chandler never struck me as a dynamic screen presence, but as Mike Shayne on the radio he was amazing! Surly, tough as nails, Mike Hammer’s slightly smarter brother had one violent bone-crunching episode after another! My favorite is “Tahlani’s Tears” where a crazed seaman named Jeremiah comes after him with his peg leg and pirate hook. Wild Stuff! 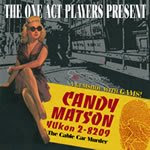 “Candy Matson” is a female private investigator who solves crimes with a drunken has-been actor named Rembrandt Watson. I like the episodes when she’s running around San Francisco…pretty atmospheric stuff, and she has a sexy voice. Pre-phone sex!

But the Mad Daddy of crime radio was probably Jack Webb. When he wasn’t busting heroin dealers, juvenile delinquents, or psycho movie set stage hands on “Dragnet” he also had a short-lived show called “Pete Kelly’s Blues”. This took place in New Orleans and Kelly was a Dixieland trumpet player who always got jacked around by gangsters. In one episode he takes a beating from a gangster and forced to drink ten shots of whiskey! “Whiskey! AGAIN!!” In between action scenes there would be a soothing Dixieland jazz interlude. Weird!!! After the show was cancelled Webb made a film version of the show with Peggy Lee, Jayne Mansfield, Ella Fitzgerald and Lee Marvin. What a cast! 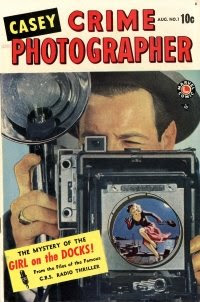 Old crime films aren’t everybody’s cup of tea but if you love film noir you have to get in on OTR. There’s some great listening to be had, and long road trips are a million times more fun with these psychotic soap operas blasting their weird scenes into your cranium.
Posted by Andy 7 at 3:42 PM

Radio shows are perfect for shut ins. You have picked all my favorite shows.
My favorite has to be Casey Crime photographer. Casey, Miss Williams and Ethelbert are my buddies. We even work on holidays. I want a bar like that!

Thanks for reminding me what to play instead of making a phone call.