Your Audition My Nightmare 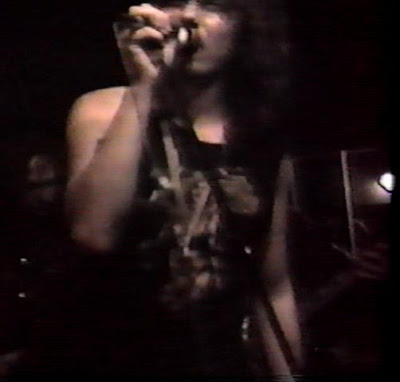 Rather than a-boo-hoo-hoo about the old rock glory days I much prefer remembering all the reasons why I slayed the old showbiz bitch in the first place. Case in point, the most dreaded rock god task of all: auditioning musicians. I'd rather have my crunk teeths drilled for hours than go through the asswipe personalities I've had to audition through the years. Here's a few winners I had to try out for rock group immortality:

There was Mr. A.D.D., the guitar player who guzzled Big Gulp sodas all through rehearsals and copped such a psycho sugar buzz he couldn't focus on my songs. "Hey let's forget about your stuff and just write a bunch of new shit". Playing rhythm guitar was impossible for him. Every song was played with busy Robert Fripp-styled leads. That's SO punk rock!

Jazz guitar man - he called my ad which specifically said punk guitar, so he comes over with a huge hollow-bodied Gibson and starts picky plucking George Benson jazz guitar to my hardcore skronk. And he scatted vocals to them A DOO-BA-DOOBA-DOO-WAY-AHHH. I broke out laughing, and not for the good reasons.

Topless Dave - never wore a shirt, possibly the stupidest bassist alive. "You gave me a fake address, man, you LIED to me".
"No I didn't, I'm at 545 Ogden Drive".
"I went to 544 Ogden Drive and the next house was 546 Ogden, there's no such fucking address as 545 Ogden, dude".
This asshat couldn't understand that odd and even address numbers never run next to each other. I suspect he's currently a carrier for UPS - that must explain why my last package from Amazon never arrived.

There was the drummer who refused to set up behind the band. His drums had to be IN FRONT. He was kind of the Rosa Parks of percussion. There's something really clumsy about having a wide, messy drum kit set up in front of a band. It kind of keeps everybody from cutting loose for fear of running into ginsu knife-sharp cymbals. Big surprise - he was a lazy player, too.

The bass player who wouldn't come to rehearsals booked after 9 PM. Nightclubs don't open until 10 PM!

Drum Whore: "I'm not coming to rehearsals tonight because I have a paying gig tonight at Big Jim's Sports Bar". And you still have to pay the $36 rehearsal rent because he called 20 minutes before show time.

The greatest paradox in auditioning musicians is when you have a guy who looks cool, listens to killer music and he's the easiest guy in the world to get along with (if you weren't straight you'd marry him) and HE PLAYS LIKE SHIT. DAMMIT!
Conversely, there's the guy who looks like your pedophiliac uncle, listens to Supertramp and acts like a dick, and HE SHREDS ON HIS INSTRUMENT. DAMN YOU, KARMIC KLOWNS!!!!
Posted by Andy 7 at 6:18 AM