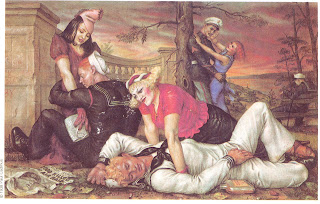 Openly Gator: “Queer Duck, only you would treat a funeral like a disco”.
Queer Duck: “But everything is a disco”.
-Jm J. Bulllock, Queer Duck (Showtime)

The parade? Well, how disappointing was that? I didn’t see any motorcycle dykes this year and the vivid memory of gay gray leather daddies rockin’ out on a flatbed truck all giving me chickenhawk appraisal is permanently burned in my innocent memory banks. No gray gay leather daddies this year, just a lot of crummy marching bands, wholesome gay kids in white t-shirts marching down the road, dullard Asian PFLAG, etc. I like my gay filthy and nobody was serving it up. There was a bear truck with eyes and fangs but the gays on it were safer than soap.
Debbie, oops, Deborah Gibson rode on a convertible and waved to the crowd sporting the worst weave ever seen. It wouldn’t fool a 5 year-old. Worst Gay Pride Parade, ever.
After all is said and done, I had a great time both days and it was great to celebrate life and laughs with my gay friends. We are fambly.
Posted by Andy 7 at 7:08 PM