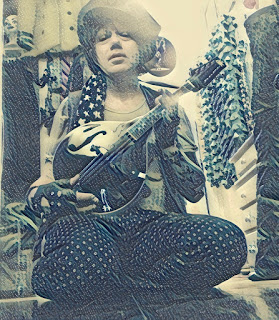 I couldn't tell you where my love for the mandolin started, but it started early in life. Maybe it was Ian Anderson playing his great song Fat Man ("people think that I was just good fun, man") or maybe it was all those brilliant Warner Bros. pop records featuring Ry Cooder, but I was so smitten with the instrument that I bought a Nonesuch Records album of classical mandolin music featuring sonatas by Beethoven and Hummel. I've always had mandolin fever but never got into the game. Until now.

Last summer I finally took the plunge and bought a mandolin set - that is, the instrument, a backpack-style gig bag and an instructional book with chords. I went for the completely jet black lute made by Rogue instruments. I set the bridge up and immediately started playing. I was in Seventh Mandolin Heaven!

I taught myself a few chords and started digesting as many YouTube tutorials as my nosy mind would absorb. I also discovered some great mandolin players of the past (Bill Monroe) and the present (young Sierra Hull and the equally amazing Justin Moses).

In addition to playing the easy songs in my instructional book - Wayfaring Stranger, Song of Joy aka Clockwork Orange, and Big Rock Candy Mountain I also began learning some of my own tunes, as seen below.

My decision to engage in acoustic music wasn't as quirky as it might seem. It was a serious decision made regarding my return to music, which I wasn't looking forward to because of my tinnitus. The prospect of performing loud music again was painful just to think about.

That's me at Holmby Park playing my song Husband Material, a song I used to play with my band Trash Can School. I've been playing in parks all over Los Angeles a lot lately and I really enjoy it. It's very invigorating to be able to play outdoors and I try to do it every weekend. Beats playing to a brunch of drunks in some nightclub!

En route to playing all this wild stuff I also got heavily into folk music, and I don't mind listing my favorites: Dave Van Ronk, Tim Buckley (even the gigolo shit), Judy Henske, Fred Neil and even some of the cornball Kingston Trio stuff is decent - check out Hangman by them. Beats Nick Cave at his own game IMO. Listening to these wildmen and women of folk has been a great education in song crafting and phrasing.

In addition to learning my own stuff I'm also learning a few punk songs on my mandolin. I'm working on a cool version of Nice & Sleazy by The Stranglers as well as Ex-Lion Tamer by Wire which I plan on posting soon on YouTube. Keep your eyes peeled on my channel. I've created a monster - a Mandolin Monster and I couldn't be happier. 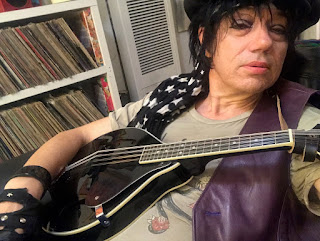