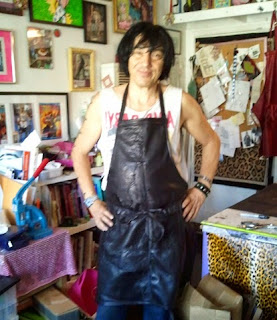 I'm going to a job interview; no, let me rephrase that, I'm going to an interview at an employment agency that will send me to a place I can work at for a brief assignment. The name of the agency is DeskWorks and they came highly recommended on Yelp, earning their coveted five star rating.

I enter the office wearing a suit and tie, trying hard to make a good impression. I introduce myself as Spencer Smith to the receptionist and sign in at the front desk. I'm told to take a seat and as I do I reach for a magazine to read until my name gets called. Every magazine on the table is People Magazine, US Magazine, or In Touch Magazine.

The debate continues and intensifies until I finally hear my name called and I meet my work coordinator. He's a neatly dressed African American man in his fifties named Dalton with close-cropped hair and a green tie with a pink shirt. After the usual small talk I pull out my resume for him to review. He likes my job history and all seems well until he notices a black spot.

'Spencer, can I call you Spence? What's this here about your high school graduation year?'
'Is something wrong with it? Should I take it off?'
'Yes, I would definitely recommend it'.
'Do employers look down on high school graduates?'

He scrunches his face, hemming and hawing. 'No, it's not that. It's just that you list 1974 as the year you graduated. If you were eighteen 40 years ago no one will hire you. You're already dating yourself with your resume....Um, yes, you need to take this off. I can't send this out. This would jeopardize your employability'.

Holding my temper, I ask him if there's anything else he sees in my resume.
'Tell me about why you left your last permanent job'.
I coat the truth by telling him that I left my last position because a new manager came in and brought her own staff with her, cutting the rest of us loose.

The truth is that I worked for a mentally unstable single mother who formed an insane crush on me and thought that I would be her man, even though she still called her abusive ex-husband to come over and fix her air conditioning. 'My son still needs his father', she said.

I go home and change my resume and send it to Mr. Dalton the way he wants it. I call DeskWorks the next day and Mr. Dalton is too busy to talk to me. I leave a message, then another, and another and Mr. Dalton has no intention of returning my calls. I killed myself by revealing how old I am.

“The application process has several steps. The first step is taking a written test. After you pass the written test, there is a typing, Microsoft Word & Excel test. After you pass that there is an interview with two or more people who place people in “bands”, which are levels of who they think are most competent. Even at this level, you can be eliminated. The entire process takes over a month, maybe two. If you are chosen, you will probably be assigned to scanning paperwork for six months. Once the assignment is over, you have to undergo the application process again in order to be considered for the next clerical assignment”.

I recently switched gyms. I dumped the last one because they kept closing every time I went there. One time someone burned a bag of popcorn in the microwave oven and they turned on the fire alarm, forcing everyone to evacuate the building regardless of whether they had their clothes on or not.

People using the pool had to stand out in the street in their swimming trunks until the imagined fire was contained. There were more strange excuses for kicking people out of the gym until it became impossible to go there on a regular basis.

The new gym I went to was in the gay section of town. The membership was cheaper and there wasn’t a microwave oven in sight. I chose that gym because I knew that the men were serious about keeping fit and exercising. It wouldn’t be just another social club. There weren’t a lot of women there, and the ones that did looked like they stepped out of ads for the LA Weekly – thin, cold, and unfriendly. But there was one who was different.

When I first saw her she was thick and flabby with a henna rinse of hair and horn-rim glasses, but the odd part was that she wore a leopard spotted t-shirt and a man’s old baggy swimming trunks. She wore tons of eye shadow, foundation and lipstick. She looked like a bottom feeder stripper trying to lose weight so she could get a job at a better club.

In spite of feeling uncomfortable working out for the first time, she was pretty focused with her workout. Unlike the others she didn’t have an iPod connected to a pair of ear buds plugged into her skull. I’d glance at her periodically because she distinctly stood out from everyone else. She was someone different. I saw her every week I went to the gym.

A few weeks later I missed my regular night and went on a different night. In spite of the change there she was, the girl working out in the weight room, which she never used before.

Her appearance changed: the glasses were gone, she bought standard workout spandex clothes but the heavy makeup was still there. The workouts did their magic: she looked thinner than she had since the first time I saw her. I glanced at her for a moment, and upon seeing me she looked alarmed, quickly got off her exercise machine, and raced out of the room.

Two weeks later the leopard girl was at the gym, by this point looking virtually unrecognizable. She wore blindingly bright fluorescent workout clothes, styled her hair, her makeup was heavier than ever and all the flab and chunk she had when she walked in with was long, long gone. She went from looking like someone’s mother to looking like someone’s daughter. When she saw me she walked by my exercise machine and made a weak, ineffectual sneer.

When she sat down at her exercise machine, instead of working out like she usually did, she simply sat there, staring straight ahead, just camping on the machine. It was if she was saying, 'I lost the weight. I don’t have to work out so hard anymore'.

Angered by her unwarranted dirty look I walked up to her and said, 'You were a lot nicer when you wore swimming trunks', and walked away before she had a chance to say anything.

I moved into the weight room and without turning around to check I could feel her eyes burning into my back. And that’s the last time I ever saw her again.

She probably got a job at a better strip club.

I show my new resume to an agency called Clerk Army and they send me out to a job with a pay rate closely approaching minimum wage. The job involves typing up letters to the Mayor of Los Angeles and the Chief of the Los Angeles Police Department.

My supervisor is a woman who looks like a young Elizabeth Taylor from 'Suddenly Last Summer' and whose husband also works in the building. He checks up on her several times a day. Perhaps it's because she only hires men to work under her and she wears her clothes so tight they look like they're going to burst from her body. Every curve and highlight of her body gets equal stage time when she reports to work.

In the beginning I create reports and attend important meetings and am treated like a valued employee, pygmy-sized pay and all. My desk is situated in the front of the office. Everyone sees me as they walk by the front door. I enjoy the attention and the responsibility. It makes me feel needed. Everybody tells me I’m a real life saver.

Two months later the secretary who’s been out on physical disability leave returns and I have my job duties taken away from me. I’m reduced to picking up her mail and running downstairs to set up tables and chairs in the meeting room. I also have to unpack and set up twenty laptops every other day. I’ve also been moved to the very back of the office in a small corner, out of plain sight from everyone.

After three months of running around the building and doing nothing else, my supervisor senses my boredom and calls me in to her office. Wearing a tight sweater with a plunging neckline and even tighter pants, she lets me know that my assignment is winding down.

'Spencer, we really value your work here. Would you be interested in having your assignment extended by another six months?'
'Well, um…'
'I know you’ve been thinking about returning to full-time employment. I can advocate for you to return to full-time if you agree to a six-month extension'.

I can tell she’s working me, and I can’t remember being worked this hard since 1974 when a girl at Rodney’s English Disco badgered me into taking her to the Rainbow Bar & Grill and then ditching me once I snuck her in.

I tell my boss that I’m not interested. She responds by not talking to me for the next two weeks until my assignment is over. I’m actually pretty relieved I don’t have to deal with Young Elizabeth Taylor anymore.

When I drive home I think about the next assignment and how I have to work for more money. The phone company wants to disconnect my line. I finally get a call from Mr. Dalton at DeskWorks. I let the voice mail on my dying cell phone take the call. Let him leave a message for a change.

He wants me to guard a jewelry store in Beverly Hills for one night. A wine tasting party in the middle of Beverly Hills need temps to guard the stores so the drunken rich people don’t go berserk and loot the local merchants.

I decide not to call him back. An old man needs his rest. 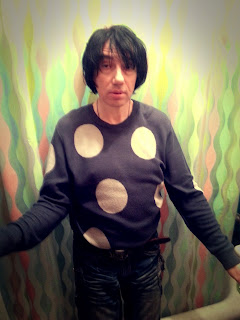