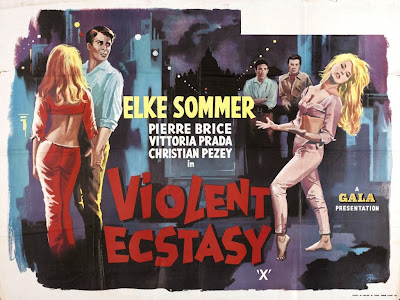 You Tube is better than ever. They’ve opened up the floodgates with posting full-length films in order to compete with Netflix and other assorted cinema providers, and needless to say, everybody wins. This month I’m going to review a few foreign films with strong female performances I wholeheartedly recommend. Most of these films are already legendary in foreign film circles, so if you’re well-versed in new wave cinema you’ll already know about these great films. These films are all currently available for your entertainment on You Tube.

1. Les Bonnes Femmes (The Good Time Girls): This is one of Claude Chabrol’s earliest efforts (his fourth) and considered by many to be the beginning of his sinister yet understated style. He films must be the quietest murder mysteries I’ve ever seen. They are so unassuming that when a murder eventually occurs it’s genuinely shocking.

Les Bonnes Femmes is the story of four shopgirls who dream aloud of men, money and freedom, not necessarily in that order. Bernadette Lafont heads the cast as a wayward party girl who continuously makes bad choices in men, but that’s the point of the film. The women fantasize about the perfect romance but the men they choose are arrogant control freaks.

The climax of the film is pretty powerful, making you wonder what you just watched to the point of wanting to see the film all over again in a different light. And Lafont towers over all the other girls, no small feat. 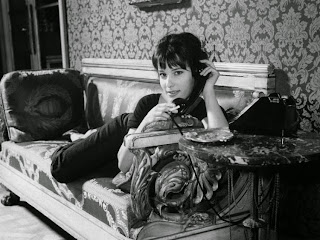 2. Les Novices (1970): Bizarre psychedelic romp featuring Brigitte Bardot as a bored nun escaping the order to run wild through the streets of Paris. She’s taken in by a worldly wise prostitute played by Annie Giradot.

The irony is that the prostitute exhibits more compassion and intelligence than the runaway nun, but maybe we shouldn’t read too much into this. It’s supposed to be a sort of Odd Couple-style buddy comedy with French ladies running through the streets of Paris. It’s all good fun, anyway, and BB looks amazing. One of her last good movies, maybe THE last.

3. Sweet Ecstasy (1962): This one has long made the rounds on cheap, low-budget public domain video companies, but the You Tube version is the best with a clean, beautiful letterboxed transfer. This French film is a pretty good juvenile delinquent movie about a bunch of reckless thrill seekers featuring a young, hair hopping Elke Sommer. 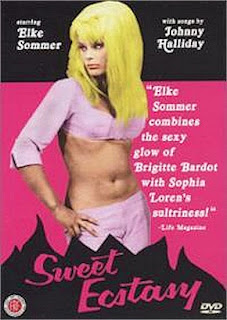 Elke’s boyfriend Maddy talks her into flirting with a shy rich nerd named Olivier in the hopes they can mess with him. In between picking on this poor dude there’s tons of le jazz hot, Elke striptease dancing, et al, topped with an amazing final scene where Elke the babe’s bound in bondage aboard a burning boat. Try saying that fast ten times. Two years later Sommer became a huge international star from the Peter Sellers comedy A Shot In The Dark. 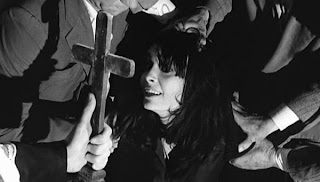 4. Il Demonio akaThe Demon (1963): There has never been a film quite like Il Demonio (The Demon). Dalia Lavi gives a performance most performance artists would give their first born for. She plays Purificazione, a misfit from a chaste ultra-Catholic village in the Italian countryside. Unlike the other women she’s unruly and perpetually in a state of ardor, making the religious locals believe she’s possessed by the devil. The sad truth, of course, is that she’s madly in love with the utterly gross Antonio, who thinks she’s trash.

Lavi spits and screams and writhes around like a wild animal in heat, but raises the horror movie bar with her upside-down spider walk (pre-dating Iggy by about ten years!), which has to be seen to be believed. This movie and the Mario Bava classic The Whip And The Body are probably her two best films before she transitioned to spy movie fame (Casino Royale, The Silencers, etc.).

5. L’Enfer (1994): Yeah, everything goes back to Chabrol. This latter day work by the master doesn’t disappoint. It’s the story of Paul, a struggling hotel resort manager played by Francois Cluzet, rapidly burning out to the degree that he sees his wife (Emmanuelle Beart) cheating on him every time he turns his back.

Paul imagines best friends and hotel residents all having a go at his wife, manically fantasizing about her infidelities. He spies on her continuously, stalking her more like a sex-starved stranger than a husband. The pinnacle of his insanity is his jealousy over his wife doting on their four-year-old son. Paul is the jealous husband from Hell! 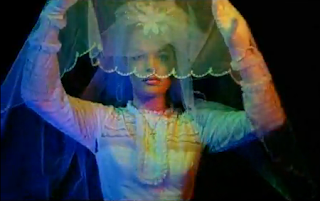 L’Enfer, aka Inferno is one of the cinema’s great unfinished projects, originally filmed by Henri-Georges Clouzot (The Wages of Fear, Diabolique) in 1964 and starring Romy Schneider and Serge Reggiani. A documentary about the original film is available on You Tube (in Spanish subtitles) and it’s a knockout!

The documentary includes footage from the film as well as test shots which freely experimented with the use of color, lights and sound. Some of these test shots, when used, were highly innovative and reminded me of the films of Kenneth Anger and the Hans Richter film Dreams Money Can Buy (also available on You Tube).

Cinematographers and sound engineers discuss the making of the film and the various difficulties the film suffered – budget shortages, the leading man falling ill, dropping out and Clouzot’s own failing health. Truly a great documentary about a film that would have raised the stakes of the cinema and revived Mr. Clouzot’s career.

So, that’s it for now. Five and a half films from Europe, all showcasing some of the strongest female performances I’ve ever seen and most of them date over fifty years ago. Catch all these films when you can. They’re absolutely free and available on You Tube. 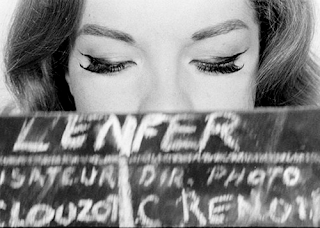