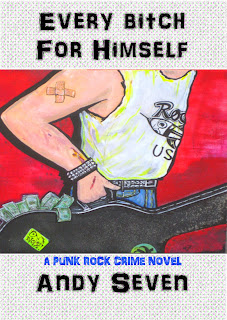 Now would be a good time to take a break from plugging men’s fragrances and free downloads on You Tube to let you know what's been going on lately.

I'll start by letting you know that my latest novel Every Bitch For Himself has a new, revised cover (seen above) as well as a rear cover that's pretty awesome to look at, too (pictured below). Both feature illustrations by the great Rebecca Seven.

Every Bitch For Himself now retails at $2.99, still a great deal compared to the overpriced paperbound books glutting the shelves at Barnes & Noble. Plus the book totally shreds, as Gore Vidal would say.

In addition to the Andy Seven page I created on Amazon.com I've also created a Cockfight page in honor of my band that played from 1993-1999. The page contains some cool photos of us as well as a few mp3 tracks for you to listen to.

Cockfight was a great band that played lo-fi punk with some brain shredding guitar sonics and performed at clubs like The Coconut Teaszer, The Abbey, The Garage, Club Lingerie, and Raji's, to name a few. You can find the page here: http://www.amazon.com/Cockfight/e/B001LI969G/ref=ac_dtp_sa_link.

I've also begun uploading full length films on You Tube which I hope you enjoy. I've kept the film selections pretty varied, running the gamut from modern rock films like The Year of My Japanese Cousin starring Selene Vigil of 7 Year Bitch to a 1941 Shemp Howard solo comedy Ghost Crazy to noir classics Naked Alibi and Violated. All movies are unavailable for sale on DVD so there's no bootlegging involved. You can find my channel here: https://www.youtube.com/user/ChunkyBoots/videos.

Wranglers' Canyon is almost complete and should be finished by April with a July release date. I promise a pretty big surprise with this edition - it will be a lot different than anything I've done before. Like my two previous novels it will be an eBook via BookBaby.

Unfortunately I haven't had a lot of time designing clothes lately but I plan on remedying that soon. I have a few designs up my sleeve that I'll be working on this summer. Pics will be posted up as soon as they're all stitched up. All I'm going to say is: I hope you like leather. 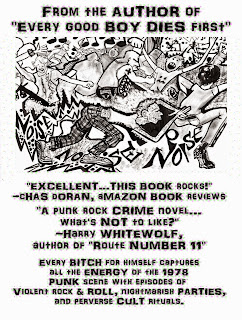