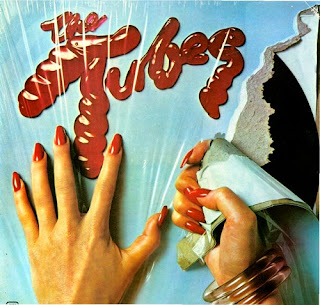 In the early Seventies there were several collectives that combined glam music with theater. In London there was the highly successful Rocky Horror Show, Los Angeles had The Mystic Knights of the Oingo Boingo (some of whom evolved into the band Oingo Boingo), and San Francisco had The Tubes.

Although Rocky was a musical production, Oingo Boingo was a theater troupe and the latter was a rock band, they all had one thing in common: a talent for blending cabaret, high camp, retro post-modernism with a healthy dose of glam rock in the mix.

What made The Tubes wilder and creepier than the others was the way it took glam rock, North Beach strip club sleaze, video technology, S&M and good old American excess (from both average Americans and decadent rock stars – no one was innocent) and presented it in a flawless stage production with brilliant musicianship.

Released in 1975 and produced by Al Kooper, The Tubes is one of the strangest debut albums ever recorded, a stunning mélange of glam rock, progressive rock interludes, cheesy Broadway showbiz vocals and breathtaking high-tech electronics.

The band’s stage show had them flanked by television monitors, at least twenty in all, hence the band name. Some of the monitors showed the band performing in real time and others showed interactive routines going on as the band played.

The first track on the album is Up From The Deep, sung by Bill Spooner, one of the two guitarists, letting us know that the music can be changed and morphed whenever the spirit moves them. His voice is recorded as if he’s underwater. The melody has an Indian-type wail to it until it goes into a bizarre prog rock interlude that takes several flashy twists and turns, finally breaking into an explosive boogie woogie piano rave-up.

When I first saw The Tubes at The Roxy in 1975 (previously home to The Rocky Horror Show) they performed Haloes in matching suits a la The Temptations while a pre-recorded track played behind them. No great shakes these days, but in 1975 it was unheard of, but funny.

Space Baby sounds like a retro-Fifties ballad about an intergalactic babe that space traveler Fee Waybill pines for down on Planet Earth. Waybill sings in a wailing David Bowie style. The song also features the aforementioned Broadway choir-type backing vocals with the synth playing as an electronic horn section, all very Bowie meets Flash Gordon.

Mondo Bondage was probably the very first exposure many rock fans had to the world of S&M since most bands never even went there. Fee and show girl Re Styles both donned bondage outfits and masks during this number and it was a pretty intense show stopper. The song was pretty weird, too, with a wild jazz-metal interlude while the two performers went into a creepy session, giving us all a taste of North Beach live sex acts to a rock beat.

What Do You Want From Life? is a Frank Zappa-type parody on super consumerism that’s still powerful today, and even posits that proposition that even if everybody got what they wanted would it still be enough? Really???? The more excessive the needs the faster, quicker and more manic Fee Waybill’s voice gets.

At some point during the show Fee sang Bali Hai from South Pacific – there goes that Broadway shtick again, and then after rips into a manic rendition of Tom Jones’ “It’s Not Unusual” with a quintet of naked girl dancers backing him up.

The finale to the stage show, as well as the album is Boy Crazy and White Punks On Dope. The reason why both songs are lumped together is because they both share the same thing in common. The Tubes turn the spotlight away from themselves and point it at the audience, something most punk bands took credit for a year later. In an era when most bands sang about the pain of being rock stars this approach was highly subversive.

White Punks On Dope was The Tubes’ big anthem and told the tale of wasted, wasted youth in the high class suburbs. Once again, it was released one year before punk rock so it’s uncanny how much ground The Tubes broke and received scant credit for their innovations. The blend of ray-gun synthesizer with heavy metal boogie guitar is infectious while Waybill delivers another uncanny David Bowie imitation in his sky-high platform heels and huge platinum blonde fright wig. His Quay Lewd routine was the other show stopper after Mondo Bondage.

Nina Hagen’s highly operatic version of White Punks also has to be heard to be believed. I saw her do it at The Greek Theater – the show with the spaceship and nearly fell on my ass. Good times!

Clocking in at only thirty-seven minutes and some change, The Tubes’ debut album is like the Daffy Duck magic trick where he blows himself up and laments that it’s his “best trick, but he can only do it once”. The Tubes couldn’t really produce anything as powerful as their first album, but in spite of it they managed to rack up several hit singles during the New Wave Eighties – Talk To Ya Later, Monkey Time, and She’s A Beauty. But the debauchery of the stage show never went much further or wilder than that first tour. Perhaps it was just a sign of the times.

The Tubes’ first album is still a crucial work because there’s a timelessness to it, it’s musically challenging, endlessly inventive and the sonic soundscapes are downright creepy at times. Like The Residents, there’s a post-modernism that anticipates the beginning of punk rock and even the dreaded behemoth of New Wave. Like the foreign radio voices that herald and close the album you will be transported to a strange land unlike any other. 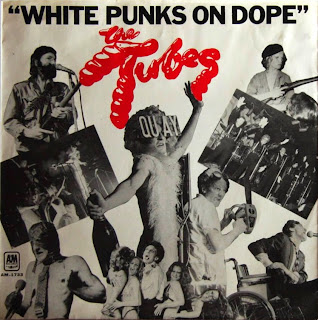