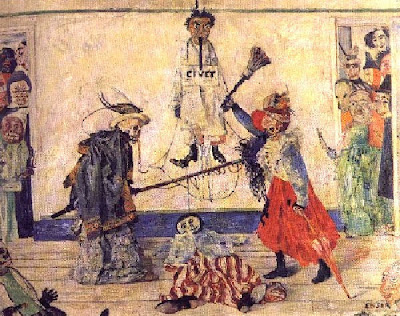 In the early Seventies when I lived in New York I bought a litho of a creepy painting titled "Masks Fighting For The Body of a Hanged Man" by an artist named James Ensor. Pictured above, it's an illustrations of two skeleton women literally fighting it out with brooms and mops over a hanged man with groups of masked freaks and witches looking on from a doorway. It was unlike anything I had ever seen, and it was my entryway into the art of James Ensor.

James Ensor, born in Belgium and creative during the turn of the century , may be one of the most under documented artists ever known. His artwork is an endlessly creative line of grotesque images rendered in a naive art style that can truly elude any easy classification. Sometimes impressionistic, other times expressionistic, yet neither, perhaps his inability to be classified explains his regrettable obscurity after all these years, almost 100 years after his death.

All this "regrettable obscurity" came to a close one afternoon this summer when I drove down Pico Boulevard and saw huge banners of Ensor art hanging from street lamps announcing The Getty Center exhibiting a show called "The Scandalous Art of James Ensor" (June 10-September 7). I could hardly believe my bloodshot eyes! 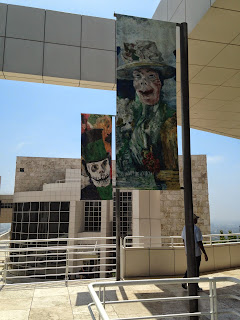 The Getty Center show is truly a feast to the eyes of any Ensor fan, providing an absolutely comprehensive retrospective this side of Brussels of the great artist's works. I also learned a lot about the great man himself, and was surprised by what I learned. Mr. Ensor may have been The Original Goth Kid. A portrait of his maternal grandmother informs us that she was a seller of grotesque masks which excited and influenced his art in the years to come.

He was also a big fan of Edgar Allen Poe's works and his paintings based on several of his stories, i.e. Hop Frog, including the bizarre "King Pest" were on display at the Getty. He also had a cool harmonium (Nico's keyboard of choice) in his studio that he enjoyed playing. This dude was Goth before Goth got cool!

For all the horror business Ensor served up I don't think it was all gloom and doom. I detected notes of humor in many of his works, and his depiction of government and military officials were reminiscent of George Grosz in the cartoonishness (Ensor predated Grosz so it's presumptuous to say he was an influence on the German expressionist). The subject of death breached a cross between humor and horror, and I liked the party and horror mask paintings the most. 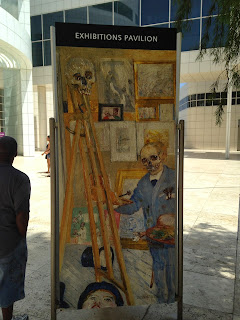 Ensor's wild masterpiece "The Entry of Christ Into Brussels" (1888) was not only displayed in its full splendor but also had a little magnifying glass-style display you could peruse all the details of this unique masterwork. Ensor's mixture of colors and even brush strokes were so erratic which left disturbing hints of a runaway psyche on every piece displayed.

I was happy to see so many people analyzing and enjoying Ensor's works - attendance was pretty robust for such an obscure art star. I also chuckled when I saw an endless line of Ensor souvenirs on sale at the sale counter. I wasn't ready for an Ensor coffee mug, but I got a few magnets and punk rock-style buttons. Now maybe Taschen can put their Ensor retrospective back in print! 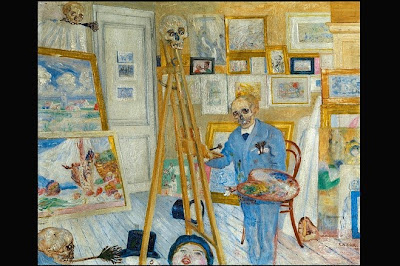