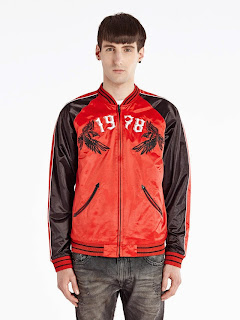 Well, it ain't over until the satin bomber jackets get pulled out again, and thanks to Diesel you can relive the magic of bad Seventies fashion even if you were swimming in your Daddy's balls back then. Diesel touts a red satin bomber jacket with "Venice 1978" stenciled in vintage Gothic gang lettering along with an embroidered eagle flying eastward and westward, ho. The advertising copy of this re-animated monstrosity reads thus: "JAPAN BOMBER - Circa 1970's Tokyo served as an inspiration for this collection, hence the Japan Satin Bomber". Actually, that doesn't tell you a whole lot but the fashion world never really has much on its mind, anyway.

So, what's new in the world of fashion? David Lynch launching a line of women's sportswear? No. American Apparel appointing their first female Board Director? Maybe. Paris Fashion Week came and went with the SS15 fashions making their mark. I found most of it underwhelming with designers either stumped for ideas or simply reviving looks every bit as tired as, well, the satin bomber jacket.

Although I wasn't at the shows I gleaned all my information from the awesome website Dazed And Confused, whom you should definitely follow. Anyway, here are my impressions from what showed:


Comme Des Garcons Hommes Plus: Teddy Boy quiffled hair, goofy shoes and man skirts. The hair was a lot worse last year but this year's clothes didn't impress much. Drape jackets in 2015? No.
Anne De Meulemeester: Long, drapey black and white coats and robes. I don't see guys wearing these on the streets except in Tokyo. Maybe.
Balmain: Loud, bright beaded jackets that reminded me a little of Missoni, but still very colorful stuff. A lot of fun. 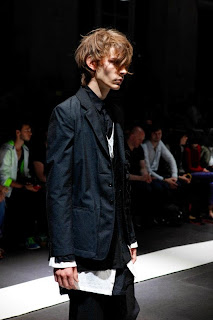 Bottega Veneta: BV showed weathered, faded resort wear, looking a lot like the unwanted stuff at a vintage clothing store in West Hollywood. They're usually pretty cutting edge so this was a major upset.
Burberry Prorsum: Pastel color blocking on jackets, pants and shirts, looking like everything you can get at H&M but costing way more and lasting just as long.
Raf Simons: Look out world, Raf Simons has discovered color. No black this year. Goth kids mourned the world over, more than they usually do.
Topman: Topman brought back the Nineties Britpop look, Richard Ashcroft mod hair styles on all the models with big Oasis sunglasses. The clothes were kinda lacking but the skull styling was A plus. 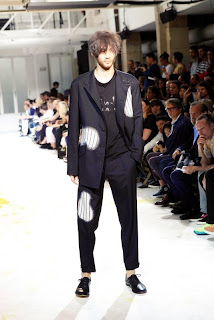 Yohji Yamamoto: Kinda cool, avant garde suits with big, floppy hats. Spaghetti Western drag goes to Wall Street.
Rick Owens: Bad, asymmetrical designs with long, draped fabric. Surprise! All austerity and no fun. A Rick Owens and Raf Simons beer bust would be more fun than a barrel of hemorrhoids.
Dries Van Noten: This was interesting: neatly tailored prints, all style, all fashion.
Givenchy: Black and white floral spotted clothes, looking like inkblots. I didn't like it and I think it would probably work better with women than men.
Yves Saint Laurent: Hedi Slimane designed the new collection as a homage to the Seventies, bad Laurel Canyon hippie chic, by bad I mean ponchos, Injun hats, John Phillips velvet corduroy pants. It looked old before it even hit the runway. 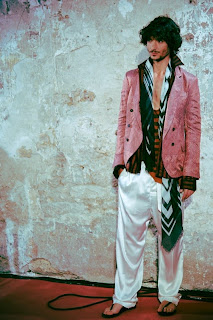 Beverly Center in Los Angeles is preparing for the launch of a gigantic Uniqlo store, and for those who don't know about Uniqlo yet (you will) it's a Japanese fashion premium outlet that's already made a big hit around the rest of the world. I've seen some of the menswear fashions and think it's a little too preppy for me, but it will probably still make a ton of money with the average buyer out there.

Uniqlo will be a big hit because menswear at most premium outlets are stuck in a rut and haven't changed much. Who's the competition, well, we already mentioned American Apparel who have yet to master the art of correct sizing; Urban Outfitters, catering to the slacker college kid from Portland look - schlubby; H&M, still suffering the schizoid dichotomy of deciding whether to rock Casual Resort Guy fashion or the Business Casual Guy.

I don't know, but right now my money's on Zara, which lately has been selling Burberry-style menswear at rock bottom prices. Zara might be too radical for the average shopper but as far as I'm concerned they're the only premium fashion line that's delivering exciting designs at affordable prices.