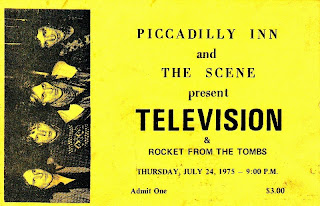 Everybody wants their stuff and they want it now. "We want the world and we want it now", Jim Morrison bleated almost fifty years ago and nothing has changed. If you want a song or an entire record you can get it a matter of seconds, movies, books, you name it. But it wasn't always that way.

In 1975 glam was going through its last gasp - you knew it was over when The Edgar Winter Group threw on the spackle and platform boots. Punk rock crawled its way through just like the freaks crawled under the circus wagon in the thunder storm with knives in their mouths, ready to gut Venus and Hercules.

I followed the glam scene closely in Rock Scene Magazine and there were gurgles about punk bands in New York like The Ramones, The Fast, Patti Smith, The Mumps, The Stilettos and Television. Television was the most interesting looking as they were the very antithesis of glam: short hair, no makeup, torn clothes and crappy pawn shop guitars. One particular photo by Christopher Makos of Tom Verlaine and Richard Hell made them look like Richard Speck and Charles Starkweather formed their own noise band. The only nod to glam was Richard Lloyd, who sported platinum blonde hair like Debbie Harry.

Rock Scene Magazine printed a little caption announcing an exciting new single by Television called "Little Johnny Jewel (Parts 1 & 2)" on Ork Records. It only cost $3.00 and could be purchased post paid from a P. Laughner in Cleveland, Ohio. It was the most eagerly anticipated single of its time. Yeah, back in the day we had no downloads. We had to send money across the country for a 45 RPM single. There was a quite a wait (more on that in a second) but the wait was worth it.

"Dear Avram*- As regards TV all orders were forwarded to New York City as the response was fantastic they had to do a third pressing of the record to meet demands - please be patient and thank for your support.
Peter Laughner
P.S. As further correspondence should be directed to me at the above address (Cleveland Heights, Ohio)".

Well, I eventually got my single and it was so bizarre, not what I expected, it wasn't rock but it was definitely a very New York record. What does that mean? Well, I see the Museum of Modern Art when I hear the single, I hear some jazz club like The Five Spot. I feel beatnik frequencies ripping into my head, ESP-DISK nightmares, even some of The Godz and Silver Apples in their sound. Very New York.

"Little Johnny Jewel (Parts 1 & 2)" sounds like a dark, dark, dark beatnik coffee house, seductive in its intimacy. You can smell the burning candles - the record sounds ascetic for its time, avoiding the decadence of Queen or The Tubes or any other overproduced glam rock of the time.

Part 1 begins with Fred Smith playing a very simple bass line over and over while the guitars make twittering and plucking noises, like they're waking up and then Billy Ficca's drums kick in, not playing a simple 4/4 punk beat, but shock horrors (!!!) it's a disco beat.
As soon as the drums simmer a cool disco beat the guitars wail a remedial, almost naive fanfare. Tom Verlaine sings a very cool, laid back vocal like Lou Reed in "Here She Comes Now".

What's so remarkable about the recording is that it's a veritable textbook in dynamics, drums exploding one moment then simmering, guitars howling and then whispering, emitting moods of slacker cool and boiling tension equally. I like the part where Tom whispers like a hypnotist, "And he ran down to the airport...the rush, the roar...and he crouched down behind a fence...with a chest full of lights..." The guitars go impressionist, playing sparse but bright notes like winking airport lights, quiet hypnotic guitars and the drums sending us out of Part 1.

Part 2 picks up where Part 1 left off, the hypnotic part building up into a noisy palette of sounds, guitar picks banging against necks like Jackson Pollock splatters of paint, and then explodes into a perverse flamenco guitar solo punctuated by a high shrieking note. All the guitars eschewed the big fuzz Marshall stack arena sound, Richard Lloyd strumming simply behind Verlaine's freedom guitar playing.

The second side ends with Verlaine returning to the main theme, crooning cooly, "Oh Little Johnny Jewel...he's so cool...but if you see him looking lost...you ain't gotta come on so boss!
And you know that he's paid...you know that he's paid the price...all you gotta do for that guy...is wink your eye". Mysterious lyrics, mysterious music. Entranced by TV.

Rock groups weren't supposed to be mysterious or quietly sly, music was by and large loud and brash. Television made people nervous because they weren't a quick study. Personally I thought "Little Johnny Jewel" was a far more auspicious debut than Patti Smith's "Piss Factory" which had a corny Broadway musical jive to it. It could've been a show stopper in a musical like "Rent". But I digress.

Television released a single which sold out several times over and captured the mystery of New York. It was executed so well even the band had trouble living up to their promise with subsequent recordings. It wasn't punk rock but it wasn't average Joe rock, either. It was lightning in a bottle set to music. What a great five minutes it was.

* I used to use my Hebrew name in correspondence, in this case being Avram, Abram also known as Abraham before God anointed him as Father of the Jews. In other words, as Sun Ra once said, "I have many names, names of mystery, names of splendor". 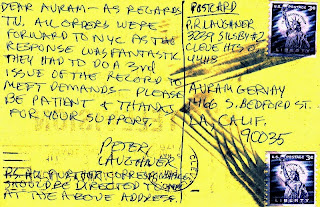