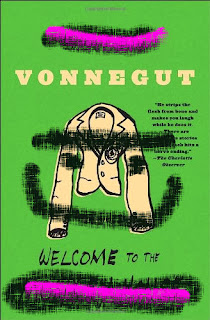 Social networking, like cancer is here to stay and probably won't ever leave and will take our lives away from us in varying degrees. While I'm proud of my abstention of Facebook - big deal -I'm still linked to Twitter, Tumblr, Flickr, You Tube, Instagram and probably a few more digital dungeons that have slipped my mind at the present time. One of the more unusual phenomena in the social networking stratosphere is the review site, i.e. Yelp for vendors - Yelp is The Devil, by the way; Goodreads and Shelfari for books, Rotten Tomatoes and iMDB for movies to name just a few.

Writing reviews for Yelp started out as a bit of fun in the beginning but all good things must come to an end, eventually. Even with over 200 followers I still had people screaming at me for reviews that were less than completely worshipful of their favorite burger stand: "ARE YOU TOTALLY RETARDED????? HOW CAN YOU NOT LOVE IN 'N OUT??????? DUDE!!!! I CALL FOUL!!!"

Somehow it wasn't enough for them to love an overrated dump like In 'N Out (My Anus), I had to join the choir of colon abusers singing their praises but because I didn't I had to endure hateful comments and PMs (Personal Messages).

Things finally got out of hand when my wife and I got out of our car in Koreatown on a Saturday morning at 9 am, and a disgruntled Yelper down the block honked his car horn several times and gave me the finger. Just to make sure I got the message he got out of the car and screamed "FUCK YOU" at me several times. When he noticed my wife and I laughing at him for behaving like a retarded dragon biter he nervously ran back to his car and quickly sped off.

After leaving stupid Yelp and its idiotic drama I joined Goodreads, way better but things are starting to get psycho in Book Review Land, too. Although I have loads of followers and friends (you're all awesome) there are a few wing nuts that scream at my reviews for "revealing spoilers". A spoiler, for those who aren't familiar with the word, is a surprising twist in the story that usually alters the climax or denouement of the novel.

The spoilers that I have been accused of revealing were not major plot points but nevertheless inspired more screaming comments on the order of "DUDE!!! YOU JUST RUINED THE BOOK FOR ME!!! WHAT WERE YOU THINKING????"
Another angry comment came from a midget from Bulgaria who said, "OBVIOUSLY YOU'RE A TROLL (not with over 225 followers I'm not) AND I WILL HAVE YOU KICKED OFF GOODREADS FOR GOOD!!!!"

By the way, most of these hysterical protests seem to come from the male camp. Women seem to spend more time actually reading books instead of whining about book reviews. Apparently life to these whistle blowers seems unbearable in the knowledge that someone somewhere doesn't like something they've enjoyed for years, and until they scream their insane heads off at you for not liking their favorite book, movie or record the world will never spin properly on its axis again.

Let's talk about this spoiler business, and I'm going to be harsh about it. If a film or a book is over 30 years old it's perfectly okay to mention the ending or any other part of it because everybody on the planet has probably already read or seen it, okay?

If you don't believe me, read numerous interviews with Alfred Hitchcock discussing the ending to Psycho or Orson Welles discussing "Rosebud" in Citizen Kane or Robert Aldrich explaining the reason he changed the ending to Kiss Me Deadly. Would these same Goodreads ass clowns run over to these legendary directors and scream "DUDE!!!! SPOILERS!!!" to their faces? I think not.

So, with that in mind I present to you a book review tailor made to satisfy even the most petulant of spoiler queens. The book I'll review today may or may not be a collection of short stories called "Welcome To The Monkey House" authored by (spoiler alert) Kurt Vonnegut Jr.

This collection of stories is bound with a front and back cover made of card stock with an attractive illustration on the front. In between are many pages with stories published in them. I hope I haven't given anything away so far!

This book begins with a (spoiler alert) preface by the author which lasts three pages. It's a fairly mild preface but actually pretty dull. There, I said it. Good thing it was so short. Most of the stories were written in the Fifties and early Sixties and perfectly capture the blandness of the American middle class during the Cold War era.

I also found Vonnegut's science fiction writings to be dry and dull. He does shine, however, when he approaches the eccentric middle class in stories like The Foster Portfolio about a man with a big secret (DUDE!!!BRO!!!), Next Door and Go Back To Your Precious Wife And Son.

I also found Vonnegut's compassion and insight towards people outside of his ethnicity poignant, as in his heart breaking tale of a black German orphan in DP or his tale of a Holocaust survival couple in Adam.

But the crown jewel in this collection is an extremely funny story called The Hyannis Port Story which lampoons the crass commercialization of the Camelot-era Kennedy presidency, published just months before the President's untimely death in 1963. DUDE!!! SPOILERS!!!!

Yes, there will be thousands who won't agree with my review. Start lighting your torches and sharpen your pitchforks. You can burn me down in Koreatown.

Spoiler alert!!! I like the tasteful song you posted for the cry babies.