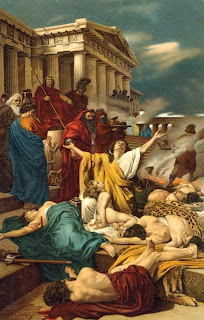 Since Hanukkah is falling abnormally early this year, on Thanksgiving even! I've decided to write a small tale for the holiday. Here it is:

It was December 1968 and I was a mere stripling of 12 years. It was a cold winter by Los Angeles standards and the holidays were approaching, Christmas and Hanukkah. Usually around Hanukkah we would visit a childless elderly couple, The Pollaks.

Although they were the happiest and warmest elderly people I have ever known, the Pollaks met under less than romantic circumstances. Henry Pollak was a concentration camp survivor who saw his wife and four daughters killed by the Nazis. Agnes Pollak also suffered through seeing her husband and children murdered in the camps. Survivors both, they shared their experiences and mourned together and eventually married. When my father came by to visit he would reflect his experiences with them. Most of his family was wiped out as well.

One night when we visited the Pollaks, they left the living room and my brother changed the channel on the TV from a wrestling show to a World War II war show ("Combat"). There was a scene when army tanks rolled into a small village and as we were watching it my father and the Pollaks came back into the room.

The normally mellow Mr. Pollak dropped his customary friendly tone and shouted at my brother, "CHANGE THE CHANNEL! CHANGE IT RIGHT NOW!"
"Put something nicer on. Take it off", my dad said.
A little freaked out by the reaction, my brother quickly turned the TV knob to the next station, taking us back to two wrestlers beating the crap out of each other and drop kicking each other in the face.
"HAHAHAHA, oh that's funny!" The Pollaks laughed hysterically.

A week later we had assembly in the gym at school and there was a projector in the back. Nobody knew what they were going to watch. Sometimes we saw films like the instructional CPR training movie but this time no one knew.

The school principal, Rabbi Goldstein didn't help with his obscure introduction. Walking up to the microphone stand he simply said. "You are going to see a film about your future and your parent's future and your friend's future".

With the lights turned off, the film started and we watched a black and white film of concentration camps....Auschwitz, Dachau, Buchenwald, Bergen-Belsen, Treblinka....a voice narrated over the footage of genocide.

"During the Nazi purge of World War II, Nazi Germany exterminated millions of Jews, young and old alike..."
-An emaciated Jewish boy with a shaved head and haunting eyes stares at the camera.
"...Man, woman and child, the Nazi death camps showed no mercy to anyone, slaughtering people by the hundreds whether by bullet or by gas chamber..."
-Piles of dead, emaciated, naked Jewish bodies are pushed into a huge, bottomless ditch by a tractor.
"...The Nazis showed no mercy to the Jews of Europe, even making lamp shades made from human skin..."
-Skeletal Jews are being gently carried out of the concentration camp gates by American soldiers, liberating them.

"With the end of the Jewish nightmare comes a new paradise, the State of Israel..."
-The film is now in color and shows olive groves around a sunny desert. The sky is a clear blue.
"A Jewish state brimming with industry and promise, one can live here safe from threats of genocide..."
-Fifties era Israel shows Israelis farming and laughing, enjoying their jobs on a Kibbutz.
"Women participate in the Israeli army or they work on a Kibbutz. A Kibbutz! A cooperative farm where man, woman and child enjoy the fruits of The Holy Land..."
-Footage of dark women in fatigues with rifles drilling, date trees in a static desert surrounding them.
"This is The New Holy Land, Jerusalem of Gold!"

The film ended with a rising crescendo of music to stir the soul and the lights turned on. The principal returned to the mike.
"After you graduate Hebrew school, I want you to consider Israel as your new homeland and work on a kibbutz. It would be a life-changing experience. Talk it over with your parents tonight!"

Returning to our regular classes, I wondered why I would give up a city that housed the Whiskey A Go Go, the Santa Monica Pier and Irwindale Raceway for a farm in the desert. I didn't even like looking at short-haired girls in shorts juggling rifles.

My school would often employ Israelis newly arrived to the States as teachers. Many of them did not have teaching credentials at all, but as long as they could speak Hebrew they had a job. The worst teacher and class I ever had was the one called Jewish History. Jewish History consisted of a Six-Day War veteran named Mister Gur newly emigrated to the US teaching us what he did during the Six-Day War. He was a red-haired man with a handlebar moustache and thick horn-rimmed glasses. He spoke with a lisp and never bathed. Every day he wore the same white dress shirt open down his chest so you could see his chest hairs.

Class consisted of him pulling down a yellowed map of Israel in front of the blackboard and using a wooden pointer to show each little town where there was war action. He spoke very slowly and knew very little English. If you knew Hebrew you had a fighting chance of understanding him.

"Tho, we went to....Haifa and got our orderth to go the Gatha Thtrip, and blah blah blah..."
I started daydreaming.
"Hmmmm..." I thought. "If The Beatles put out a white album cover and The Rolling Stones also put out a white album cover does this mean EVERYBODY'S going to put out white album covers? That's so dull-"
"THEVRIN!!!! Are you paying attention? What did I jutht thay?"
"Um...." think fast. "You surrounded the Egyptians and they all surrendered!"
Everybody laughed. Mister Gur's face turned red.
"Go to the printhipal's offith!!!!!"

Great, now I have to tell the Zionist principal I didn't pay attention listening to a bunch of war stories.

Hanukkah is a holiday about the empowerment of the Jews who fought back against the Greeks when they took over the Second Temple and outlawed Judaism. A family of rebels named The Maccabees fought against them and emerged victorious. Hanukkah is a holiday celebrating Jewish strength over adversity and not one of sorrow or persecution. 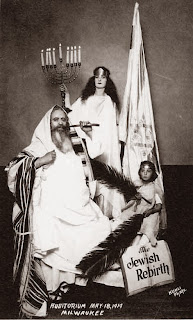 Today marks the Centennial birthday of my Uncle Alex who I wrote about in my story "Hungarian Kitchen Fight Club" (August 11, 2007). A remarkable man who began as a mechanic in my grandfather's machine shop, he survived The Holocaust and moved to the United States where he repaired motorcycles, maintaining a highly loyal clientele among countless biker clubs across the greater New England Area. When I asked him if he was offended by their swastikas, he'd just smile and say, "They don't really understand what the hell it means".

Although he worked long hours in his garage he still managed to find time to put on tefillin and pray in the morning. Happy birthday, Uncle Alex, 100 years old today. 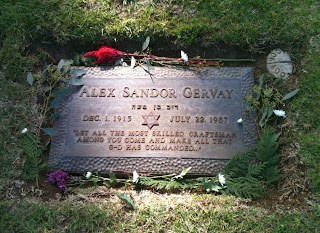