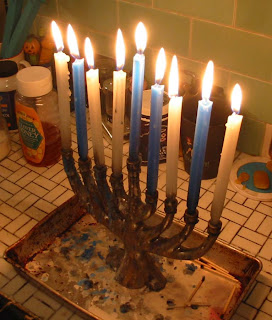 This week - Saturday night, December 8th -brings the arrival of Chanukah, Hanukkah, or the Festival of Lights. Hanukkah is an 8-day festival represented by a candle lit for every day on the Menorah, the candelabra used for this special occasion. The Menorah is used to commemorate the miracle of a single day’s portion of olive oil lasting eight days, the olive oil being important for lighting the candles in the newly rededicated Second Temple.

One of the most significant aspects of Hanukkah is that it reflects an image of Judah and The Maccabees, Jewish rebels that fought against the tyrannical Antiochus Epiphanes of Greece. In light of the tragedy of The Holocaust it was important to remember that there were times in Jewish history when Jews have risen up and rebelled to reclaim their right to be Jews.

For the next eight nights candles will be lit and added each night on my Menorah (pictured above). Buying Hanukkah candles has always been pretty cool. Nowadays you can get candles in silver, gold, or multicolor with weird little wax appliqués on them. I get a different color and design each year. The wax is usually in a braided shape with the appliqués hanging off them like moon craters. You can find them at Bed Bath & Beyond in addition to any religious store.

Rock It For Me - Caravan Palace

No Jewish holiday is complete without a seasonal delicacy to make the holiday more fun, and that’s where latkes come in. Potato pancakes with either apple sauce or sour cream on the side, even non-Jews enjoy eating this all year round, but they’re the official delicacy for Hanukkah.

Another festival custom is spinning the dreidel, a diminutive spinning top that we played when we were kids. Each side of the dreidel had a different letter, which in Hebrew has a numerological value to it. When the dreidel stopped spinning and fell on the letter with the highest number value the kid with the highest number would win all the chocolate coins or bubble gum coins the other kids would put up in the betting pot. I always preferred the chocolate coins to the bubble gum coins because the bubble gum was always too hard and made your jaws ache!

After all is said and done you can’t beat an awesome holiday season, and growing up in snowy Providence, Rhode Island in 1961 was the best. Predominantly Roman Catholic (a lot of Italians lived there) even my family loved going to downtown Providence and looking at the great department store displays with Christmas toys and electric trains and the humongous Christmas trees all tricked out with billions of lights. It was pre-zactly just like Bob Clark’s classic film “A Christmas Story” with all the elaborate fancy toy displays.

After we checked out the great store displays all over the metro area we drove through the residential areas to see who had the most extravagant display in front of their house. Some people went all out with an elaborately built manger (like in “Diner”) or a Santa’s Village that would make Walt Disney blush. One manger showcased statues painted and lit so ghouly grotesque the Three Wise Men looked more like Dracula, Wolfman and Frankenstein. Scary. I guess the bottom line with this holiday season that it’s all about THE LIGHTS, Christmas or Hanukkah. The snow might be falling but it’s all about THE LIGHTS.

The morning after this Xmas phantasmagoria had us bobsledding down the hilly streets of Taft Avenue, Rhode Island Jewish kids sledding in the snow with the starry spire of Temple Emanuel standing tall at the top of the hill like a sentinel protecting us from any further Antiochus Epiphanes in the future.

And all I want for Hanukkah is lots and lots of Burberry Prorsum clothes for men, or at least the dough to buy it with! 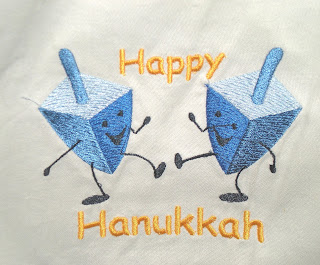 Parov Stelar will be appearing at The Nokia Theatre in Los Angeles on Friday, December 14, 2012 at 8 pm.

Super cool and it even has a soundtrack.