I've Got Friends: The Sunset Of Celso Chavez 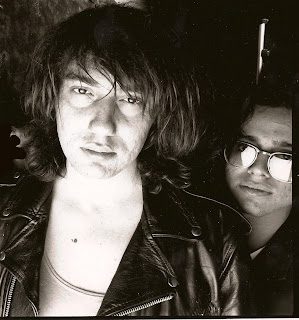 On May 9, 2012, my friend and colleague Rob Zabrecky reported the sad news that Celso Chavez had passed away at 1:42 pm that afternoon from pneumonia due to complications brought on by lyme disease. The news was surprising because of all the musicians I’ve ever played with he was probably the healthiest and most physically fit.

I first met Celso in early 1989 when Lucas McClelland, my bassist, brought him to our rehearsal. Celso picked up the songs right away and brought a great positive attitude to a band of jaded cynics like us. To be perfectly honest I look back on the 1989 edition of Trash Can School with affection and nostalgia. After searching for so many years for players that shared my quest for musical exploration it was a genuine gift to have Celso, Lucas and Manny share my enjoyment in exploring new sounds and sonic landscapes.

Celso was responsible for our most memorable song, a cover of Patti Smith's “Horses”. At one of our rehearsals out of sheer boredom we started playing a feedback-laden version of Frank Sinatra’s “New York, New York”, and instead of crooning the familiar opening line of “Start spreading the news, I’m leaving today”, I went into “Jesus died for somebody’s sins but not mine”. Lucas and Manny followed Celso’s and my lead and, well, the rest is history. In fact, when you hear the opening chords to our recording of “Horses” that’s Celso you’re listening to.

One of his favorite stories he liked to tell was the time we recorded that single at Radio Tokyo. When it was time to record “Phantasm III” I asked him, “Well! Are you ready to lay down your solo?”
“I’m playing the solo? No way”. (Getting nervous)
“Didn’t you prepare a solo?”
“No! What am I gonna play?”
“I don’t know but you’re gonna have to come up with something amazing in about five minutes”.
“Dude, I’m totally scared. I’ve never played a guitar solo before!”
“Perfect, you’ll be great. Take all the fear that’s inside you and pour it out of your guitar”.

Celso recorded his guitar solo in one take, a manic, screaming slice of atonal brain shred sounding like a Latino Sonny Sharrock at his most homicidal. For the rest of his life every time Celso saw me he said, “You told me I was a lead guitarist and I wouldn’t believe you but you made me believe!” His gratitude always touched me because it was genuine, like everything he felt. 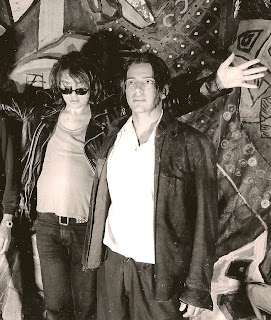 In the brief time he was in the band (less than a year) he made a substantial impression on our music as he co-wrote “Baby Lust”, another one of our biggest songs. Celso’s knack for writing and arranging great, catchy rock songs was always fine tuned.

Celso shortly left Trash Can School to play with Possum Dixon, writing and recording “Friends”, a hauntingly brilliant song about the irony of friendship with layers of feedback guitar and an eerie reverbed vocal.

We went our separate ways, but in 2002 I left a comment on the message board for his new band, Pill Module. He called me shortly after and we started meeting for lunch periodically. He was working for the LA Unified School District or a similar non-profit educational agency and I worked for the LA County Department of Children & Family Services. Celso was always happy to see me and fun to talk to, telling me about how proud he was to be a father and how much he loved his wife and son.

During the time I saw him I turned him on to Emmitt Rhodes and David Garza since they both played pop music with an edge, both of whom Celso never heard before. When I told him David Garza was going to play Café Largo soon we almost went, but we both lamed out and flaked.

After another lunchtime I remember taking him to the Jewelry District downtown to my favorite jeweler because he was getting a diamond necklace for his wife, Veronica. I totally hooked him up and he never stopped thanking me for it. Another time I took him down to the LA County Department of Human Resources to check out the clerical positions there because he wanted something that paid better and had better job security. He was pretty serious about keeping his life together. Eventually we drifted apart again; I guess friendship has its irony all the time.

When I think of Celso I remember a man who always maintained a positive attitude, an open mind to new ideas, and a free-spirited willingness to gamble with a crazy bandleader who always went for broke. Although the sun has set for my friend Celso, after the sunset is the coming of the stars in the sky, and the brightest star in the Hollywood sky tonight and every night is Celso Chavez. 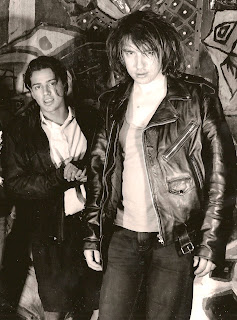 That was very touching. I am sad you lost a friend.

Thank-you Andy, for such a beautiful tribute.Celso always looked up to you, and considered you to be a real friend, in a city where he felt so many friends were fake.

Celso took his last breath, though assisted by a ventilator,at 11:40 am at Burbank's St. Joes. I watched him die, and as I sunk to my knees, wailing, I knew my life would never be the same without him. I lost my best friend; our son Vincent lost his dad. Celso died from "community acquired pneumonia,MRSA with Sepsis" but the death cerrtificate also noted that his death was due to "Substance Abuse History".
He kept this last part a secret. I knew something was deeply wrong with him in the last two years of his life...I called him out on it and he always grinned and said "Nahh. I'm fine!"
I love that he was shopping for a diamond necklace for me in the "Diamond District" of downtown L.A. He would have showered me in diamonds if he had the money..but the diamond necklace was a gift he gave me only in our dreams.
I will miss him terribly. I still cry every day. But my life will always be better for having loved him. Thank-you Andy.

Hi, Veronica. Although I couldn't attend Celso's funeral I did attend the nighttime wake which was an experience I'll never forget.

Whether people know it or not they are influenced by their friends in one capacity or another, and Celso continues to live in my consciousness.

Andy, I am glad you got to attend Cel's Rosary. It was a very special event, and like you, I will never forget it either.

Celso forgot that he did have friends. Lots of them. They are very real, and they filled that room that night. Thanks for being there!