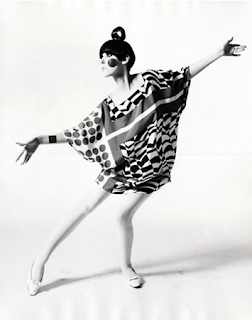 One of the most infamous mixed media ménage-a-trois collaborations of the past fifty years was the brilliant work by jazz photographer William Claxton, his wife/model Peggy Moffitt, and genius designer Rudi Gernreich. Their work together has been documented well through the decades, notably in “The Rudi Gernreich Book”, edited by Claxton and Moffitt and also in Claxton’s short film “Basic Black”. So it was absolutely thrilling to attend the mixed media presentation of their work titled “The Total Look” at West Hollywood’s Museum of Contemporary Art (MOCA) at the Pacific Design Center.

The show had something for everyone: fashion, photography and dance: Moffitt started out as a dancer, and struck many modern dance poses in her modeling. It was the ultimate mixed media presentation; the ground floor had “Basic Black” playing on one screen with a slide show playing Claxton photos of Moffitt decked out in Rudi’s stunning designs on the other. On the upper floor were original and replicas of Gernreich designs dressed up in mannequins around the room. Seeing his mod fashions in the flesh complimented the great Claxton fashion photography that framed the walls around the room. 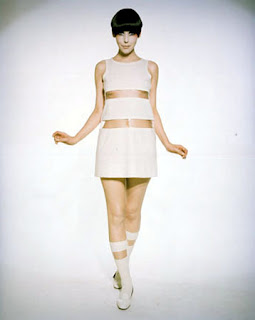 All three worked in perfect synthesis with each other, with Claxton’s photography capturing Moffitt’s expressiveness lending elasticity and shape to even the most abstract outfits designed by Gernreich. While Gernreich’s designs were amazing and dynamic enough to be modeled by any top model of their day, Peggy Moffitt added an extra dimension to his more geometric designs by ramping up the angularity in her dance poses.

Genreich’s designs have an almost architectural quality to them: cone shaped helmets, the infamous topless bathing suit, mask-like hats that cover half the face; some of them can be viewed in the modeling scene in “Blow Up”, along with Ms. Moffitt herself. He was the ultimate designer, endlessly inventive with shapes, patterns, and printed fabrics. The ingenuity of his designs displayed in the upper showroom were rich in color, composition and shape, a true inspiration for anyone even remotely interested in fashion design. I will definitely return to “The Total Look” before it closes in late May. 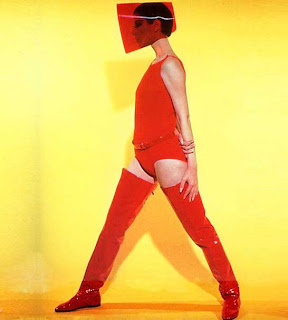 Camille Rose Garcia had an exhibition at the Michael Kohn Gallery to mark the release of her remarkable interpretation of the Grimm Brothers’ fairy tale, “Snow White” (out now via Harper Design Books). The acrylic paintings were strikingly colorful and rendered in her inimitable style, vertical cascades of color running down the pieces like unholy stalactites in a Technicolor cave.

Her rendition of the legendary characters was priceless: The Seven Dwarfs looked like a cross between E.C. Segar’s Jeep and a pack of hairless possums. Even Snow White looked kind of out of it in these pieces; the exhibit had a nightmarish, otherworldly quality. The Prince who saves Snow White is rendered by Garcia as some kind of bizarre-looking gigolo. I liked the part where she’s poisoned in her bed with her name written on it like some kind of coffin.

I haven’t seen her book on Alice In Wonderland, but all the same I highly recommend “Snow White”. As long as she’s doing Disney remixes, maybe Cinderella or Sleeping Beauty will be next.

BTW, Michael Kohn Gallery, you might want to check what year you're living in before you print up posters. I mean really. 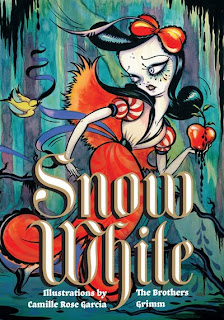 I love your choices. I love Rudi Gernriech's mod fashions on display. You have to see the texture in person, the photographs don't capture how well made every thing was. The rooms were super colorful I wanted to live there.

Also love Camille Rose Garcia's art. There is so much depth you have to see it up close and personal.