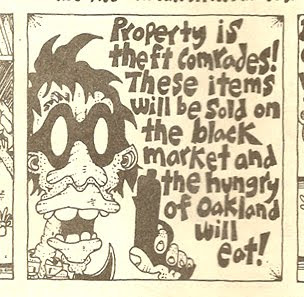 One of the inevitable things to emerge in any pop culture phenomenon is the proliferation of serious scholars and experts, and even something as low-rent as hardcore punk was not immune. By the early 1980’s you couldn’t crack open a punk fanzine without a self-appointed expert running down their version of history of punk. Even worse, they would force their yardstick criteria of what was admissible as punk and what wasn’t allowed, so an entire subculture that encouraged anarchy now had these hall monitors throwing down restrictive rules.

The fun was squeezed out by these Nimrods, always espousing clichés about supporting “The Scene”, whether it be by living a straight edge lifestyle, sharing everything you had to uphold some imaginary Socialist punk wonderland, or even worse, doing everything for free.

One of the few blasts of fresh air during this dark period were an indefatigable series of cartoons from a guy named John Crawford who mercilessly cut through all the punk rock double-talk and hardcore bullshit courtesy of a Neanderthal character named Baboon Dooley. According to ZineWiki, the punk fanzine Wikipedia, Mr. Crawford’s comic strip ran in over two hundred different fanzines, like Forced Exposure, Flipside, and Maximum Rock ‘N Roll, who eventually tired of his attack of said fanzine.

A typical Dooley comic strip would be titled a “Scene Report” and then satirize what was going down in Berkeley, D.C., Orange County, or any other hardcore hotbed. Dooley would come down there trying to freeload on free records, food, beer (unless he was fronting straight edge), or even a place to crash. Gimme gimme gimme, as Darby would say.

Other Dooley strips would flat out spoof popular figures on the published music scene, whether it be the self-titled Dean of Rock Critics, Robert Christgau, Bob Guccione, Jr., publisher of Spin Magazine, or even Mordam Records chief Ruth Schwartz.

Some strips simply showed a pair of simian-faced punks spouting inane rhetoric of punk rock principle in the most pedestrian form of didacticism possible. Needles to say, neither one bothered to listen to what the other one said. Speaking and not discussing, hearing but not listening.

Crawford's artwork was reminiscent of Edwin Pouncey aka Savage Pencil’s distinctive scrawly penciling style with a heavy-handed ink brush and screaming lettering. It definitely grabbed your attention in between the dull Homestead and SST Records ads.

While some of the humor may have gone overboard from time to time, I found a lot of these comics to be very funny and, dare I say it, punk rock in their efforts to burst the balloon of crushing self-importance and stuffiness that frankly ruined a “scene” that previously thrived on outrage and spontaneity. 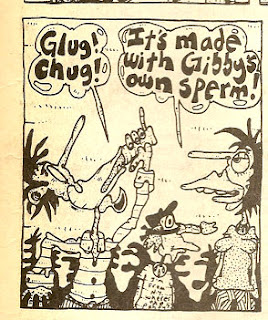 I forgot about Baboon Dooley!!!!!Ha ha ha ha ha. I knew people like this.

Wonder where Crawford is now.