Back in the Pleistocene era of punk rock (1977-1979) the top fanzines of the West Coast were Slash () and Search & Destroy (), which were both written and designed by people that worked in the field of graphic arts, cinema and publishing. This meant that both fanzines not only covered the new music that was emerging at the time, but also covered cutting edge artists, filmmakers and performance artists. Performance artists got an extraordinary amount of coverage in Slash/Search & Destroy, and a lot of these artists were every bit as exciting as any punk band.

In an era of Siouxise Sioux, The Slits, and Cindy Sherman, no other artist embodied femininity gone awry better than Johanna Went. Playing every feminine role with the manic ferocity of a mental patient, Went portrayed nuns bathed in blood carrying crucifixes, violent housekeepers throwing flour around the stage with baby dolls tied around her neck, speaking in tongues, babbling and shrieking into a microphone. A terrific jazz-noise combo would punctuate her whirling dervishes, creating an aural wallpaper as disturbing as her I Am Woman nightmarisms. She even released a great EP of jazz-noise bludgeon called “Hyena” (available on eMusic with bonus tracks, yes!). 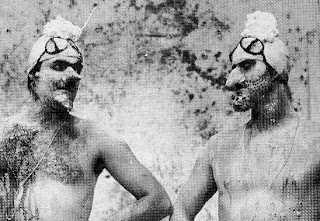 If there was a act from Hell it would be The Kipper Kids. Two stocky men who favored a cross between British lorry drivers and The Blue Meanies from “Yellow Submarine”, a performance from them would include: a boxing match between them clad only in jock straps – who would you root for, Harry Kipper or Harry Kipper?, a version of The Velvet Underground’s “Heroin” on ukulele, or an argument between them in a language only they knew. And of course, a lot of blood, animal entrails, food product and fluids all over each other, which is the sort of “Johnny B. Goode” or “New York, New York” of the performance art world. No performance artist could complete their show without making a mess all over themselves.

But performance art was more than just a spectator sport. When I lived at The Masque (1978) I once woke up to the sounds of metal being banged around, kind of like a garbage can fighting its way out of an alley. When I got up to see what the racket was all about I saw Z’ev auditioning on stage, which meant him hurling a gauntlet of metal cans, pots and scrap metal all tied together and creating a cacophonous metallic soundscape. I thought he was great, but I wanted to jam, so I busted out my saxophone and walked into the hall blowing some wicked atonal tenor saxophone. Z’ev looked shocked and probably a little pissed that I was playing along, but Brendan Mullen and company were entertained by my contributions. 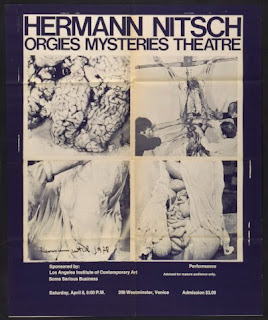 Word got around The Canterbury (where I lived after the Masque) that Hermann Nitsch was doing his“Orgien Mysterien Theater” (trans: Theatre of Orgies and Mysteries) at The Otis Institute of Art and if you had a horn you were invited to play. My neighbors Don Bolles of The Germs and Pat Delaney of The Deadbeats were going but I couldn’t make it, and I was bummed. The day after the performance Pat had dried blood all over him, and he said I missed a great show. Naked men and women were tied to crucifixes behind hacked animal carcasses as Nitsch poured blood and cow entrails all over them while the horn players blew a wall of noise. I kicked myself all week for missing that one!

Another phenomenon that was fairly big at the time was tons and tons of loft parties in the warehouse district in Downtown LA where all you had to do was show up with your horn and blow. Sometimes with a band, sometimes just by yourself along to prepared tapes, it was important for the maximum effect of the loft party. Nobody played crummy rap records, it was all about the originality of the environment and even if youdidn’t know the host of the party you were welcome to play. Shit done changed after all these years. People need to loosen up!

At the risk of writing yet another whiny piece about how cool the scene used to be I just want to testify that there was a time when punk rock was more than just a lot of bands and party merchandise. It was a living, breathing wall of sound and vision, and I’ll always fondly remember those days of watching, listening, and even participating in the sonic outrage of the Seventies.
Posted by Andy 7 at 5:00 AM

What an exciting time. You reminded me why I got into music and art. I just wanted to throw myself into every new experience. Something special was going to happen. Today I have a hard time getting excited about new music and art. Can't figure out if it sucks or if I am getting old.

The DIY spirit in "punk" has been killed off. Any possible chance of spontaneity has been replaced with a crushing self-involved careerism. This "punk" stuff nowadays is just "puke".

Yes the DIY spirit has been killed off but how about all the "Punk Rock" memoirs....ugh so self serving and dull. I like your blogs because you promote the spirit and not yourself. Life is too short to read a lousy bio.