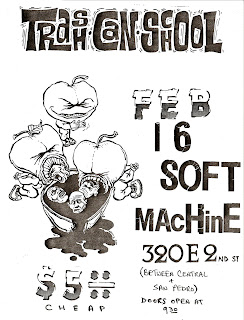 In the world of advertising there’s the sizzle: the adman’s lure aka "come-on" to get you to invest in their product, and the steak: the actual product, once it reaches your hot little hands. More often than not the steak doesn’t even remotely approach the sizzle in terms of customer satisfaction. In terms of punk shows the sizzle was the show flyer, promising outrage, anarchy and hopefully wild sex, with the steak being the actual club gig itself. Pictured above is the sizzle (gig flyer) for a show at The Soft Machine, an alias for some disco in Little Tokyo.

The show started late on a Sunday night, a pretty stupid idea to begin with. It also didn’t help that my band, Trash Can School, was on the bill with an awful 10th rate Big Black rip-off called “Sandy Duncan’s Eye”. They hated us with a passion, dismissing us as a Hollywood glam band, ironic given that their band leader’s brother was the lead singer for Motorcycle Boy, one of the crassest Sunset Strip bands around. And by the way, the majority of Trash Can School resided in the Santa Monica-Venice district.

Anyway, this stuffy power trio played one of the longest sets I’ve ever had to sit through. We asked the promoters by the first hour of their set to cut it short, people have to go to work the next day, like our fans. They did nothing. By the time we played maybe a third of the club was left, and I was mad not only at Sandy Duncan’s Douche but the bullshit promoters, so I ended up trashing the stage while we were performing. The band was as furious as I was, no sound check, no real stage to play on, just a crummy dance floor to work with, we tore through our set with a blind rage that shook the walls and windows. Needless to say we didn’t get paid. The only thing that raised a smile for me was watching Ken All Night Rocker (a dwarf from the LBC) wheeling around the dance floor in his wheelchair.

It was a sad end to that weekend because the night before we played at Bogart’s in Long Beach with Clawhammer, The Muffs, and Olivelawn, three superior bands in a great club with a cool audience, and shitfire, we even got paid well that night. I was happy that night and didn’t trash anything. Long Beach was always more rock & roll than stupid DTLA, anyhow. So all I can say is that the flyer to our Little Tokyo show – the sizzle, was way better than the gig – the steak.

When I first heard Bad Religion I couldn’t get over how a lot of it sounds like the Jewish folk songs we’d sing in school = over-melodic, super-wordy little tunes about God’s eternal majesty. The members of Bad Religion are as Jewish to the nth power, too, so the connection seemed a little suspect.

All my suspicions were confirmed, however, the night I went to Westbeach Studios (aka Epitaph Records) in 1991 to mix some tracks with Donnell Cameron. I ran into Bret Gurewitz in his office and lo and behold, sitting on his desk was a copy of “Chasidic Zemirot (trans: Songs) for the High Holidays”. You could have knocked me over with a feather! Well, that tears it. But it's cool, I think it’s great that kids are moshing in a pit to some tunes an Orthodox Rabbi riffed out in Poland back in 1865. They're sort of the yiddish Fairport Convention.

Last weekend the Jewish girls’ school across the street from my home had a Chanukah carnival. A rockin' band at the playground played Klezmer core and the kids didn’t mosh, they danced the way Jewish kids do, boys in one circle, girls in another circle. All I could think about when I heard the Jewish jammin' was, “Did Bad Religion cover this one? Would this make a rockin’ Bad Religion song?” Music sure is twisted!

When I found out “The Psychomodo” was finally available as a download on Rhapsody I leapt at the chance to buy it. While I don’t count myself as a major Cockney Rebel fan I’ve always looked back on this overlooked glam classic with a certain degree of fondness, bringing back memories of rockin’ in brass-heeled platforms – “The Low Spark Of High-Heeled Boys” indeed.

If “The Psychomodo” was an a la carte dish you could say it travels well: time hasn’t decayed the music at all. Steve Harley’s use of electric piano with violin to helm the songs was not only innovative for its time but keeps the band sounding contemporary, achieving a great Brechtian flavor to songs like “Mr. Soft”. His Ray Davies meets Bob Dylan fey didactics are in tight rein here, better controlled than on his other releases.

Songs like “Cavaliers” sport a cubic zirconium Diamond Dogs Bowie sound, pretty cool; there are times when cheap imitations are more entertaining than the genuine article. Some people like Taco Bell more than real Mexican food, Geno’s pizzas than real Neapolitan pizza, etc. A lot of old Bowie doesn’t travel well so sometimes you have to make do with pot luck, and “The Psychomodo” fills that tasty void.
___________________________________________

In 1985 when I was in Crowbar Salvation we were recording at Westbeach and our producers were Chris D. and Bret Gurewicz (yes him again). They were located in Culver City at the time and smoking in business buildings, restaurants and bars wasn’t yet illegal. While I was wondering why we needed two producers instead of one, Crowbar experienced some unplanned recording studio tension when our double producers had flame wars: i.e. to smoke or not to smoke.

Bret, who owned the studio liked to puff away while producing us, but Chris D., who was in the midst of kicking the habit asked him very quietly to stop. Bret entertained this request for a little while but finally fired up to Chris D.’s unhappiness. In fact, every time Bret lit up Chris D. would storm out of the studio. It was pretty amusing. In fact, Bret once started a take saying, “This song is called ‘This Is My Fuckin’ Studio And I’ll Smoke If I Fuckin’ Want To’”. Watching these two omnipotent titans of punk rock doing battle over the devil’s coffin nail was lo, a mighty Armageddon. It was like watching Galactus and Doctor Doom tearing up shit in the galaxy like Fantastic Four #50.

I haven’t seen Bret in years but I’m willing to bet he’s stopped smoking right about now. Me, I have one cancer stick a day. Makes music sound better!
Posted by Andy 7 at 5:00 AM