The Maker, The Faker & The Baker 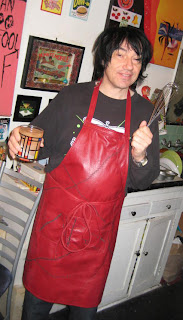 I've been working on more baking projects lately, and while some have been successful some have been pretty, uh, different. I created a batch of choclate chip scones that also included fresh blueberries. The blueberries created purple streaks in the brown dough that made my scrumptious cakes look like cow brains. Check this out: 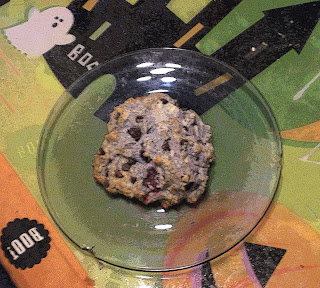 It tastes way better than it looks, and why not? It's chocolate chips and blueberries, what could be more awesome? On the other hand, I baked a pizza with pre-roasted garlic (a little too much!), mozzarella clouds instead of shredded - the clouds were large enough to cover Montana, and pesto sauce substituting the customary tomato sauce. To say the pesto sauce was oily is an understatement. I should have drained the oil from the sauce. It was a very greasy pizza. Rebecca thought it was okay, but I had to force this one down: 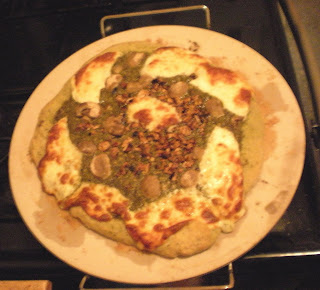 If the picture looks like a moon landing then you know how difficult it was for me to finish it. But if at first you don't succeed, try, try again, and I will.

I’m pretty proud of my YMCA membership and make the most of it by visiting the different branches around town, but the weirdest one by far was the Hollywood location. The first thing you see when you enter the facility are ellipticals in the lobby, look at me, look at me. The place had an exhibitionistic vibe about it, like some sleazy show & tell. The men’s locker room was strange in that they had huge fashion mirrors in every corner so patrons could check themselves out and probably get appraised by the other guys there. I hated it.

I went on a rainy afternoon and there were leak-catching buckets all over the gym. Either the heating was cranked or the air conditioning is virtually non-existent because the rooms were hot and humid with condensation, amping up the B.O. factor. I saw two old codgers sweating up a storm on exercise machines, not a big deal only they were too cheap to kick down for gym clothes. They were exercising in their underwear, yuck, simply fetching in stained wife-beaters and faded old boxer shorts. The work-out rooms didn’t have towels in the corner like other YMCAs, but Wet Nap tissues.

A lot has been said about YMCA not caving in to singles bar behavior but it didn’t disappear on my watch. Some old swinger in her Seventies did a weird high-stepping Scarlett O’Hara strut into the cardio room, stopping in front of me and began checking out her lipstick in the floor-length mirror. After that little routine she got on the thigh machine, yup, laying back with her legs up in the air, pumping up and down. After a repetition of only five she stopped with her legs still spread above her and made a loud aria of orgasmic panting noises. I had to leave the room to keep from busting out laughing.

As I was leaving the facility I caught a guy flat out leering at a group of girls working out in zumba dance class. What an obnoxious asshole, but that’s the whole creepy vibe about this particular YMCA. It has that whole bullshit Hollywood “Look At Me I’m A Star” attitude and makes both voyeur and exhibitionist guilty of lameness. I’ll continue to visit different YMCAs around town but it’s pretty safe to say that I will definitely leave the Hollywood location off my “Go To” list.

I'm all for progress, you just can't beat it, but there's good progress and then there's bad progress. If you buy a CD on Amazon they offer you a free music mp3 download hoping you'll give up this stupid fascination with microscopic band photos and CD art and even more microscopic liner notes (thank God for ancient magnifying galsses!). I love my two mp3 players, I do, but I love my album art to take me to the world that particlaur band wants me to inhabit, whether its The Rolling Stones "Sticky Finers", Miles Davis "Bitches Brew" or King Khan & The BBQ Show "Invisible Girl". Take away the album art and your reference point becomes hazy.

If you buy a DVD from Amazon, yup, sure enough, there's an offer for a free movie download, ouch, well I love my DVDs. Movie posters define the film, whether it's "Blow Up", "The Killing of Sister George", or "Lord Love A Duck". It's weird to say, but the most endangered species from the digital age is PACKAGING. Packaging is what makes everything appealing to the consumer, don't these internet Nazis know that? I've bought hundreds of products just based on the way they look, you mean to tell me you're doing away with that? From a business standpoint that's absolute stupidity.

I'm leaving the worst for last, of course, the horrendous Kindle and its numerous, vile e-book spawn. My eyesight's already bad enough, you actually want me to stare at a computer screen after a long, hard day of staring at a glaring monitor? I work at one of these awful places where if you're not perpetually typing away at a computer they think you're not working. Paging Charles Dickens! But seriously, I want my paper, I need my paper, I want my story on ink printed on paper. Fuck the trees, I don't care about them. I want to read my media on paper, not on some battery-charged monstrosity that will render me blind sooner than I care.

Oh yes, and I made a better pizza after all: 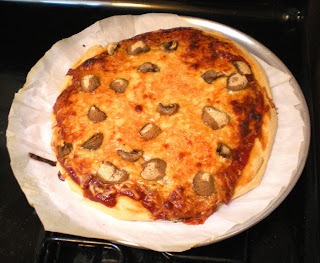