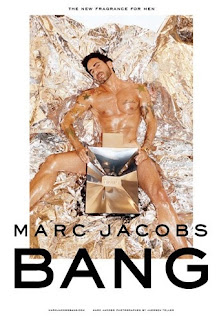 Well, break out the champagne and crank up the brass band. Marc Jacobs has dropped his first men's cologne in 10 years called "Bang!" Not a great name but what a cool package! A bottle that looks like the bashed-in front of a car hood, all bent and twisted metal. The ad campaign (speaking of packages) depicts our intrepid designer totally nude sporting the ugliest tattoos this side of G.G. Allin with his jacked-up looking cologne bottle covering up his private parts (thank you, God!). The wait was definitely worth it; a sneak preview of the scent is enjoyable and sexy, so bypass the ads and just get it. You won't be sorry.

L'Eau D'Issey Pour Homme (Issey Miyake) = A little cinnamon, a little musk, not a bad combination, I liked it much more than L'Eau D'Issey. Now that was nasty.

Eternity Aqua (Calvin Klein) = Bland and boring, skip it. The ad touts "a watery surge of cucumber, vibrant lavender and the warmth of sandalwood". Not an inspired combination of materials, and placed together didn't smell terribly wonderful.

Bleu De Chanel (Chanel) = Too many scents these days call themselves "blue" this and "blue" that, and frankly, they all smell the same. This is no exception. Pass.

Gucci Sport by Gucci (Gucci) = For those that have a fetish for sniffing the grass stains off some sweaty guy's pants after he's played Flag Football all Sunday. I'm not among them! Gucci makes great clothes for women, but men's fragrances is clearly not their forte.

Burberry Sport (Burberry) = A rather shrill, citrusy odor for people who want that Gatorade body aroma, hence the Sport tag. Me, I’d be happier with the Burberry Brit cologne line, which has a less strident scent to it.

Cool Water (Davidoff) = I went to school with a kid called Davidoff and he never used cologne, much less used deodorant. Again, any cologne or scent with the buzzwords "Blue", "Cool" or "Aqua" pretty much smell the same, and basically this pretty much smells like Bleu de Chanel and the rest of their peers.

One of my guilty pleasures is buying cheap deodorant from the drug store, but this time something's gone pretty awry. A few applications of Axe Deodorant's new "Dark Temptation" reminded me of another scent in my bathroom, a far more expensive one: Thierry Mugler's Angel for Men deodorant. Not as strong, but so close it's as if someone stole the recipe and put their stamp on it. Just imagine saving yourself over $20 on Mugler's deodorant for the cheapie Axe brand. Why, it's scandalous! All's fair in love and cologne war.
Posted by Andy 7 at 5:00 AM