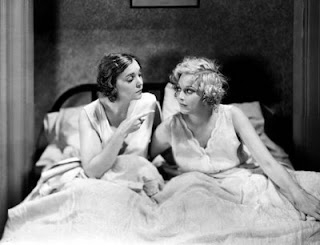 When Turner Classic Movies aired their annual "Sunmer Under The Stars" festival they did something unusual this year: among the 24 hour programming devoted to Spencer Tracy, Katherine Hepburn and Gregory Peck they devoted an entire day's programming to Thelma Todd. A true testament to TCM's dedication to esoterica when it feels the inspiration, a marathon of shorts featuring Thelma and her partners ZaSu Pitts and Patsy Kelly were aired, amply demonstrating what a great comedy team they were.

The Thelma Todd comedy shorts produced by Hal Roach were brilliant because the comedy was always feminine. The girls never butched it up to prove they can goof it up like the guys. Many of the comedic situations were as ladylike as they get: they played department store models, switchboard operators, maids, airline stewardesses, etc. Shit Dean & Jerry, Groucho, Harpo & Chico, etc. couldn't do. And there was no skimping on the sex appeal, either. In the short "Show Business" the big punch line was Thelma having her dress ripped off her - steamy stuff for its time. Because Hal Roach produced the shorts they had the same script and production quality that the Laurel & Hardy shorts had. A few of their regular support players like Billy Gilbert starred in them, too.

In "Bargain of The Century" the girls duke it out with old biddies at a department store fire sale with hilarious results. They fight over clothes they don't even want, crazy chicks. "Asleep In The Feet" is also a great short where Thelma and ZaSu play taxi dancers stuck with geeky guys that have all the dance tickets in the world. Yuck! "On The Loose" has the girls dating the biggest losers with the short ending them on a blind date with two new guys - Laurel and Hardy.

By mid-1933 ZaSu left the team and Patsy Kelly took her place. Kelly was the opposite of Pitts' character: where ZaSu was passive in a Stan Laurel-kind of way, Patsy was cast as a fiery Irish party girl who never turned down a drink. In "Beauty and The Bus" Thelma and Patsy win a car in a movie theater raffle and drive it recklessly down the road, driving traffic cops crazy. In "Babes In The Goods" the girls work in the lingerie section of a department store, Patsy barely maintaining her cool with obnoxious matronly customers.

Two years later Thelma Todd died mysteriously inside a car parked in a garage with the motor running, death from carbon monoxide poisoning. To this day no one knows who killed her, but the garage belonged to the ex-wife of the film director she was seeing. Sounds like murder to me. She was only 29 years old with over 120 movies and short features under her belt.

ZaSu Pitts and Patsy Kelly both enjoyed long, successful careers after working in the 38 shorts they made with Thelma. ZaSu was a star even before she teamed up with Thelma, and ironically may have achieved cinema immortality in her only dramatic role playing McTeague's wife in Erich Von Stroheim's "Greed". Patsy also did her best work in drama (!) playing a nurse in Sam Fuller's "The Naked Kiss" and a witch in "Rosemary's Baby". Take it from me, the next time you see a TCM listing for a Thelma Todd-ZaSu Pitts or Thelma Todd-Patsy Kelly comedy don't pass it up. It's the best unknown slapstick you've ever seen. 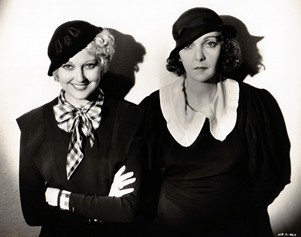 I have to see more. I only saw the one when they were working their way through college.
I have to see the taxi dancer episode!

I recall a lively episode with both girls doing
workouts in a rigorously run gym----
Many delightful entries , including hilarious
ones from Charlie Chase, on the sorely missed
Nostalgia Channel.