The Troubadour (9081 Santa Monica Blvd.) = What better band to play The Troubadour on Santa Monica Blvd. than Turbonegro , the Norwegian Tom of Finland tribute band playing songs like "Rock Against Ass", "I Got Erection", "Rendezvous With Anus", and the sublime "Sell Your Body".
I thought the bartenders were pretty friendly for such a big club, so I always tip them well. Unfortunately later (15 mins) I have to pee out my cocktail and find out the men's room is as small as a cat bed. Noooo!
So then you walk around the club, walk, walk, walk, and then you realize that the sound and visibility in the club varies from corner to corner, so keep rambling because there is no "sweet spot" there. Just keep rambling around.
I finally let it go in the alley, but the great thing about a Turbonegro show at a WeHo club like the Troub is location, location, location.

El Rey Theatre (5515 Wilshire Blvd.) = Standing proud in the sleepiest part of Miracle Mile where no one ever sleeps is The El Rey Theatre. The El Rey is a nice concert hall because it's smaller than the Hollywood Palladium but bigger than your average nightclub.
When I think of The El Rey two stories come to mind: seeing Morphine on their last tour before Mark Sandman passed away, his sleepy, grumpy slide bass guitar rumbling and shaking the old theatre silly and Dana Colley's baritone saxophone bitch slapping my ear drums around...and making me love it. It was bodacious, it was foxy, it was Morphinous.
The second time was when I modeled for the Retail Slut fashion show - my prop was a gigantic magnum of champagne which I spat across the room while dressed in Melrose goth sloth finery. The LA Weekly gave me a special item in their gossip column, "The Low Life", and I quote:
"The models worked that runway with attitude to spare: one swaggering male mannequin took a swig of bubbly and lobbed a big spurt that splashed our poor photog". I don't know if Janice Dickinson would approve, but she's been a bad girl lately, too.

Amoeba Music (6400 W. Sunset Blvd.) = There's a scene in every children's film where the lil' urchins are about to be banished to an evil factory to toil for the rest of their lives and it's cold and gray and unfriendly. Well, I think I've been there. It's called Amoeba Music.
Your tot will surely get the chills when you take them there, for they won't see heart-warming Oompa Loompas but guys with pockmarks, zits, dandruff and other hygienic violations sullenly elbowing you out of the way for that valuable copy of "Radiohead Live In Poland". Out of my way, I'm looking for entertainment!
The true collector (usually a guy whose high standards in girls makes him celibate until he's 43 years old) flips through the records at lightning speed as you can be impressed by this one (1) dexterous skill they possess.
After waling in with a laundry list of 10 records and maybe finding one you kinda-sorta want, you get in line, the one that winds towards the back of the store. You feel like little Olaf Nilsson at Ellis Island come to the big country to become American like Mr. Thomas Jefferson. Scheiss!
You spend the next 20 minutes staring at every tattooed arm and leg in line, and then it's your turn, i.e. the cashier's waving their arms frantically at you and looking pissed because you can't see them from 5 miles away. Ka-ching! Finally you escape the cattle call and feel like a million bucks because just like in the movies you escaped the evil factory for wayward children.

Anaheim Convention Center (800 W. Katella Ave.) = Weel, shit, I finally made it to the NAMM (aka North American Music Manufacturers) show at the beautiful Anaheim Convention Center. What did I see there? Well...
THE USEFUL:
-Parking was very easy if you show up early. If you show up late don't despair, there's only 500 hotels all over the area with gigantic parking lots. Your ass is covered.
-The staff and even the security guys were very friendly and helpful. I was waiting to get "Punk'd", it was too copacetic for comfort.
-The phone signal inside the Convention Center was very low. My wife and I tried sending texts to each other across the hall and didn't get them until ten minutes after we sent them. This is pretty frustrating if you're lost in a big clusterfuck like the NAMM show.
THE FUNNY:
-I was in the world's biggest Guitar Center. All I could hear was either bad metal guitar or geriatric blues-dude guitar (think "Ghost World" bar scene). Every old creep thought he was Stevie Ray Vaughn. Well, he's dead, just like Buddy Hackett.
-Ten years after quitting the music biz and sound men are still the most arrogant assholes on the planet. They all walked around with a big Peavey-sized cabinet up their ass.
-Celebrities galore graced the NAMM show: Paul Stanley, Mick Mars, my wife said, "What the fuck am I doing here? I might as well be back at work". (She makes clothes for metal bands).
THE COOL:
-Every instrument was represented there, they even had see-through ocarinas (WTF?). Is there a more lesbian instrument than a see-through ocarina?
-I'm not a big violin lover but the electric violins were insane, some of them were shaped like jet fighters and some were cast in cubist Picasso-styled shapes. Wild!
-The best guitar maker was Johnson Guitars, showcasing axes shaped like shotguns, AK-47's, Gumby, King Tut hieroglyphics, you name it, these crackers were off the hook!
-There were multicolored saxophones, multicolored music stands, it was every bit a feast for the eyes as it was to the ears.
I finally made it to the NAMM show, and I had fun. I hope I never go back there again!

Capitol Records Tower (1750 Vine Street) = If there's a sight prettier than the Leaning Tower of Pisa it's a building shaped like a stack of records on a spindle. I always thought the Capitol Records Tower was the coolest sight in Hollywood, but what a tore-up structure.
A musician I played with worked there and said the building hasn't seen much change since it was built, and I suppose that includes asbestos issues (yikes), structural funk and other antique building problems.
I was inside twice. Once, when they had their record collector swap meets in the parking lot (a long time ago), and : twice, when I attended a recording engineer training course and we had a class in the enormous recording studio in the Capitol Records basement. They told me Nat King Cole pinched a loaf down there. I was in the presence of greatness.
Check out the gigantor wall mural of Miles Davis, Tito Puente and Billie Holiday. Ironic how Ringo Starr and Brian Wilson aren't on the mural and they brought more money to those bastards at Capitol than the artists chosen. 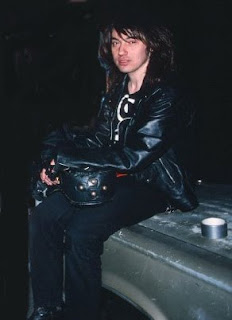