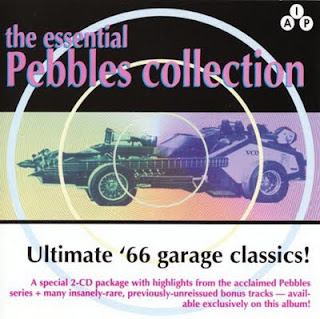 In 1972 glam rock was at its peak, but there was a sleeping giant in the process of being woken up by several critics from Creem and Rolling Stone Magazines (Ben Edmonds, Lester Bangs, Lenny Kaye, etc.), and the sleeping giant was termed punk rock, which is now garage rock. “Punk rock” was coined by them but made flesh by a compilation released by Elektra Records called “Nuggets”. “Nuggets” lumped old AM radio classics recorded by garage bands like The Electric Prunes’ “I Had Too Much To Dream Last Night”, “Psychotic Reaction” by Count Five, “Dirty Water” by The Standells, etc. In the coming years other record companies created their own psychedelic (aka “psych”) garage compilations. During the 1980’s the most popular series was released by another former rock writer Greg Shaw, now indie record mogul of Bomp Records (named after his fanzine). He issued a series of compilations that completely expanded on “Nuggets” and beyond, and named it “Pebbles”. Each volume of “Pebbles” concentrated on a different region in the USA and even expanded to international bands, as well.

The best volumes are the ones from Southern California and the International one, too. "Pebbles So Cal vol.1" is amazing, starting with Terry Randall's "S.O.S." a great number about the Sunset Strip riots, recalling Suicide of all people, with the vocalist almost whispering Police Dept. cliches over a hypnotic blues riff, "Up against the wall...let's see some I.D.", organs beeping telegraph message noises.
The Starfires' "I Never Loved Her" is a weird, chilling number that contrasts between a hardened punk bragging to his pals about dumping some loser gal after banging her, then the chorus drops into a soft, Zombies-like confessional of hidden manly fears. The guitars contrasts the protagonist's moods brilliantly.
The Human Society's "Knock Knock" is a masterpiece, slow, swirling guitars unwinding a ringing in the lead vocalist's psychotic cerebellum, lyrics spitting out a Jim Thompson-style dementia that's gripping in it's candor. And to think Donovan was mumbling about bananas while this sludge was being recorded!

"Pebbles So Cal vol.2" is equally as spazzed out, though; "Lost Innocence" by The Buddhas rocks like a wrench. "I'm Not Alone" by The David has a loping Doors-type sound with it's stately organ parts and thespian vocalizing. "Ain't It Hard" by The Gypsy Trips features a simple piano figure that rolls around in circles while backwards guitar tracks unwind in your ears, driving you crazy with its freak-out grooviness.

"Pebbles The World" is the international edition and has some excellent gems that'll make you shake like a wild pony. It opens with The Bunnys from Japan doing an insane instrumental where the guitarist violates his tremolo bar like crazy ("Moanin'"). "Dis-Nous Dylan" by The Five Gentlemen from France is a weird, slow tribute to the famous protest singer, weird because its so trance-like. Lebanon's The Cedars have a great song "Hide If You Want To Hide" with a very pronounced Middle Eastern melody that still sounds like a great Hollies-type number. John Wooley from Belgium has a driving number called "Look And You Will Find" that has a fairly cliched rock guitar line but the beat is so hypnotic and the recording is so well done you'll like it, anyway. The show-stopper on the record, however, is France's Evariste, with the absolutely insane "Connais-Tu L'Animal Que Inventa Le Calcul Integar?" (Don't ask!) It's a sort-of Wild Man Fischer au Francais, the singer howling, spitting, screaming and shitting all over himself. This one's so demented it literally stops everyone in their tracks from doing what it is they're doing, and asking "WHAT THE FUCK IS THIS?" Well, it's rock & roll, natch!

"Essential Pebbles vol.1" is a best-of compilation and well worth your attention. Classic Tracks include Canada's Haunted doing "1-2-5" ("My name's Mary Jane, I live down the lane"), T.C. Atlantic doing the haunting "Faces", and the folksy "I Ain't Dead Yet" from The Breakers. The Sinners keep it French for "Sinnerisme" where they remarks on the dark beauty of a girl's eyes. But I really like The Roosters, one of the great forgotten bands, with their sublime "You Gotta Run", 12-string guitars ringing, beautiful harmonies and reedy Beatles-like harmonica.

"Essential Pebbles vol.2 " has The Chimes doing the wild "#38" with tremolos guitar busting through the speakers like a freight train. The Yo Yos' "Crack In My Wall" has a severe Animals vibe going for it, all Eric Burdon drama like an old British Angry Young Man movie.

Much has been said about garage rock, but in discovering the hidden gems of the genre one finds unknown tracks that open up vistas of sound that are exciting and almost surprising in their obscurity because they still sound new and relevant today. While latter day compilations lie Rhino's "Where The Action Is" fill a void in unsung chapters in Sixties rock it's recommended that you look into Greg Shaw's "Pebbles" series (*and the great UK psych series "Rubble") to discover even more untold gems in the vast fabric of wild and wooly Sixties rock.
Posted by Andy 7 at 7:57 PM