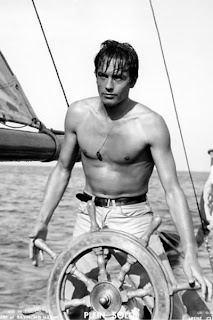 November 8th is here and some of my favorite actors are celebrating birthdays on the same day, like Parker Posey and Alain Delon. Since Alain Delon has been around longer I'm going to talk about him. Next year I'll get to Posey. Alain Delon has served as a sort of role model to me. I think he's a million times cooler and more sophisticated than a million other actors. I can't say he's the most likable guy on the planet (is any Frenchman?) and not every film he's made is cinema gold, but when he makes an impact, he's the greatest. Here's some of my favorites starring him:

Purple Noon (1960): Hands down the best Ripley, a man who's supposed to be charming you as he's strangling you. Delon is funny, friendly and deadly all at the same time. It's been said that Patricia Highsmith thought he was the best Ripley ever. By the way, the cinematography and scenery in this film is absolutely beautiful.

Eclipse (1962): Antonioni's classic film of Atomic Age frigidity with Delon playing a dark stock trader to Monica Vitti's icy blonde. This time he's the lover who's being spurned, quite a turnabout from his heartbreaker persona.

Joy House (1964): A gigolo on the run from a mob boss who wants him dead for banging his wife, Delon hides in a decaying mansion inhabited by two fake nuns (Jane Fonda and Lola Albright). He becomes their chauffeur/sex prisoner until the two dames fight it out over him, and he plays his evil mind games against them both. The twist ending will drive you crazy.

Once A Thief (1965): Delon's a Frisco fisherman who's getting hassled by his creepy gangster brother (Jack Palance) to rejoin the outfit. His wife Ann-Margret tells him she'll leave him if he returns to his evil ways. There's a great scene when he pulls Ann-Margret out of the nightclub in her pseudo-Playboy Bunny outfit and she's crying her ass off! Ralph Nelson shot this film in an amazing neo-realistic style. You won't even notice how stiff Delon's Anglais sounds in this one.

Le Samourai (1967): Delon plays a cool gangster in this very chic Nouvelle Vague noir. I prefer him as the moody, quiet type he plays in this movie. He seems more dangerous that way!

Spirits of the Dead (1968): "William Wilson", weird Edgar Allen Poe adaptation brought to you by American International Pictures. He plays a rakish sadist who cheats at cards playing against a black-haired Brigitte Bardot. If he wins the card game he gets to whip her naked. Guess who wins? It's okay, though, his doppelganger gives him the psych beat-down of his life.

Girl On A Motorcycle (1968): Laughably miscast as a college professor (sporting glasses and a thick sweater) who gives Marianne Faithfull her motorcycle she tools around Western Europe in until she rides to her death. See it anyway, it's very funny.

Like I said, even when he's not at his best he's still pretty damn watchable; he never lapses into retarded boyishness, which is the bane of all young actors these days, and yet he's always seemed very young to me. I guess the reason some of us look up to actors is because we don't have enough common sense to figure out how to behave unless we see somebody incredibly cool in a movie to show us how it's done. In that sense Delon is one of the best teachers I learned from. Merci et bon anniversaire, M. Delon!
Posted by Andy 7 at 5:20 PM