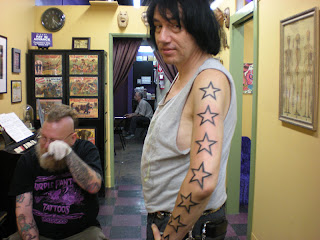 Never say never. You think you’ve got your mind made up but you never know, that day will come when “never” becomes “possibly”. I’m referring to tattoos, of course, some people have them and a lot of people have too many of them. I've always liked tattoos but the thought of wearing a permanent illustration on my body seemed daunting to me. If I’m going to wear a picture on my skin it better be something completely timeless and phenomenal.

The answer was right in front of my face. I owned a club kid shirt that was actually purty ugly but I loved the mesh arms with stars running down. It was the only reason why I kept the shirt in the first place! There was my answer, it was my destiny to have stars running down my arm.

I've been friends with Ace Farren Ford for twenty-five years when he came to Crowbar Salvation shows and told me about the LAFMS (Los Angeles Free Music Society), and his other bands The Child Molesters and Smegma. He also worked at Purple Panther Tattoo on Sunset Boulevard and did a great job on my friends and I knew I could trust him to do a great job on my stars.

Initially it started out with only one star tattooed on my left arm. The reason I chose my left arm rather than my right is because I wanted the surprise element in the discovery of my tattoo. Having a tattoo on my right arm would be too obvious and would be calling too much attention to it. After two weeks of seeing that one, lonely star on my arm I decided I needed a veritable constellation of stars, or at least six more to run down into a cool-looking sleeve.

Since Ace keeps all his images on file he already had my star ready for multi-carving. He put a gel on my arm and then slapped a tracing paper photocopy on my arm six times in descending order for placement of my star sleeve. I decided to go for just black as opposed to multicolor because the thick lines would be stronger than thin colored lines. It would be the prettiest motocross sleeve, ever. After taking a few aspirin I sat down in a barber's chair and relaxed.

The sensation of getting tattooed is not unlike a swarm of bees settling on your arm and stinging you non-stop for however the duration of your session lasts. Not comfy, but the ends justify the means, or as I like to say, tattoos are like sex: it ain't good unless it hurts. The reason for the unpleasant sting-pinch sensation is because basically the tattoo artist, in an overly simple layman's explanation sort-of-way, is carving pictures into your skin with ink. Hence all the blood that seeps out of your bandages after the session for the next four hours and the eventual scabbing that develops four days later.

Leah had a few tattoos herself and advised me to keep pumping sugar into my system to keep my energy level high in order to survive the shock to my system. She loyally sat by me handing me Altoids Raspberry Sours every three minutes.
While I quietly endured the buzzing of the tattoo needle two bimbos in "AMP UP" tanktops marched in with a case of "AMP" power drink.

"Hi, are you guys interested in a free complimentary case of AMP?"
"Well, we like free, especially when it comes from beautiful women", Ace happily grumbled.
"Thanks. Our drink uses only the most natural of minerals and vitamins, like Ginseng, Taurine, and Cystine".
"Is this drink like Monster?" asked Leah.
"Better! Is there anyone here who'd like to model with our favorite drink?"
Leah jumped up and posed holding a can of AMP. After the picture snapped, Ace said, "Come in anytime you girls want to bring in anything free."
As soon as they left Leah mumbled, "Tastes like Monster." 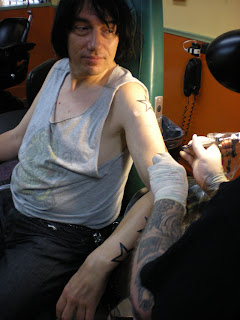 People ask me if the elbow star was the most painful, and yeah it was bad, but equally painful was the wrist star. At one point the vibration of the needle hit the bone on my wrist rendering my fingers in an almost paralytic state. In other words I couldn't move my fingers for a few minutes because my wrist was totally numb.

The tattoo artist by the next booth was working on two guys from Portugal who both wanted tiny pirate skeleton keys tattooed on their left wrist. They ran outside to take a cigarette break, then one would get his ink staring at my sleeve getting done. He looked like he hated getting his little flesh carved and would peer over at me to see me take my session. He looked like he wanted to cry but didn't want to, his boyfriend, I mean partner coldly staring at his cell phone texts. After he was done they raced out for another cancer stick orgy and then ran in so that Boy #2 got his little key etched in. When they weren't staring at me they were staring at Leah. I guess those boys would have swung either way!

Anyway, two hours later my arm was inked completely and I ended up smiling. Ace did a great job and quicker than I expected, too. The stars look beautiful, as you can see in the pictures, and I didn't pass out or feel dizzy. Leah said I had to eat protein (meat) in order to recover quickly. Looking over at my bloody bandages I went in the trunk and threw on a long-sleeved t-shirt and we went to Jan's Coffee Shop for dinner.

Normally I like Jan's but I only wanted a salad, but no, I had to have meat. I ordered the Lamb Stew but shit, it was awful. The lamb was so undercooked it was redder and bloodier than my arm! I had my protein but it was gross. I picked at it and ate maybe 15% of this hot mess while my right arm, all swollen and throbbing, felt like it recovered from a traumatic automobile accident.

For the next few days I'll wash and dab at the tattoos on my arm. Once the smoke clears and the scabs fall off I'm gonna look like Jasper Johns' brown-eyed boy. And if you don't know who Jasper Johns is you've got some serious art edjimication ahead of you, baby.
Posted by Andy 7 at 6:12 AM