The Dearly Departed Think You're An Idiot 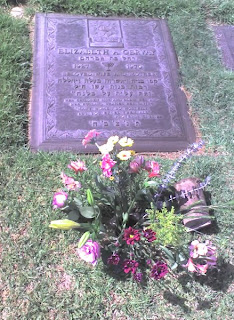 The middle of the summer has been a bitter pill to swallow for me because that’s when I observe Yahrtzeit (memorial anniversary) for both my mother and my favorite uncle. Not only do I go to temple on their memorial dates but I also take a Sunday morning off to go to the cemetery to visit their graves. When I go to the cemetery – Mt. Sinai, next to Forest Lawn, up in the hills – I stop off at Trader Joe’s and buy flowers. I like the cemetery, it’s up in the Hollywood Hills between Burbank and Glendale, it’s a nice location, even though the cemetery keepers don’t do much to beautify the property. While sitting by their graves side-by-side I kept my fingers crossed that the gardeners' golf cart-sized truck didn’t plow right into me, seeing as how it was speeding down the lawn over the graves coming right at me. Another few feet and I’d have to order my own plot. Thanks for adding to the peaceful ambiance, boys.

After saying a few memorial prayers I drove out of the cemetery and slowed down to catch a funeral in progress. At least, I think it was a funeral. Most of the mourners in attendance wore Hawaiian shirts and board shorts with sneakers. I didn’t know this was funeral attire. It seemed really disrespectful to me, but unfortunately not the first time I’ve been to a funeral where the mourners wore t-shirts, dirty jeans and other assorted casual shit. I like people to get comfortable, who doesn’t, but a funeral is a sacred ritual where people join together to grieve over their loss. If casual is the new order for funerals then I want everyone to wear their black nightclub best at my event – which will never happen because cremation is a fairly good option. Nobody belongs in a box, except for Dick Cheney.

Mt. Sinai is very stingy about trees, I always assumed cemeteries should have trees, bushes, greenery, etc. to maintain the eternal life image. Most of the grounds are flat and the grass more often than not is dry and filled with weeds. Dead people, dead plants, for the prices the mortuary charges you’d think the place would be kept better. On the way home from the cemetery I stopped off at my favorite liquor store down the Hollywood Hills and bought a root beer. As I drank I thought of all the people I’ve known who are no longer around and how their memory seems like wonderful dreams. That’s as casual as I get about death, and just for the record I wore a white dress shirt, gray dress slacks and black shoes. It's a little thing called respect, try it sometime. Get dressed for the dead even if it kills you.
Posted by Andy 7 at 3:25 PM

My Uncle never gets dressed up for anything. To him a Hawaiian shirt is fancy and he wears no shirt or a wife beater around the house. At my Grandpa's funeral last year he got really fancy - he managed to find a BLACK hawaiian shirt. Gross.

Sorry to hear you recently lost your grandfather, that's a drag.

Well that rates a nice dress. I hope you didn't wear baggies and flip-flops at the funeral. By the way, the flowers at the funeral must have been awesome.

I enjoyed this piece, Andy.